The Bank of Japan has been the black sheep of all central banks, rigidly denying abandoning its ultra-easy monetary policy even if the long-sought inflation pressures have finally showed up in the economy. Investors, however, are less patient than the BoJ, and have already started to bet against it, making Friday’s inflation figures quite important to watch. Expectations are for the core CPI rate to hold steady and although the safe-haven yen is well known about its passive reaction to data releases, any deviations may find yen traders sensitive for the first time after a long time.What’s the point of yield curve control?

In 2016, the BoJ implemented yield curve control under Kuroda’s leadership as inflation was far below its 2.0% target, despite a couple of years of quantitative easing measures and low interest rates. In other words, it committed to buy as many bonds as needed, stimulating the economy with more liquidity, by pegging its long-term 10-year yield at 0%. Was that successful? Well, the answer is no. Inflation barely moved, while the switch to a more flexible yield curve control to 0.25% last year could not prevent the central bank’s balance sheet from further ballooning to around 135% of GDP – the highest among other central banks. 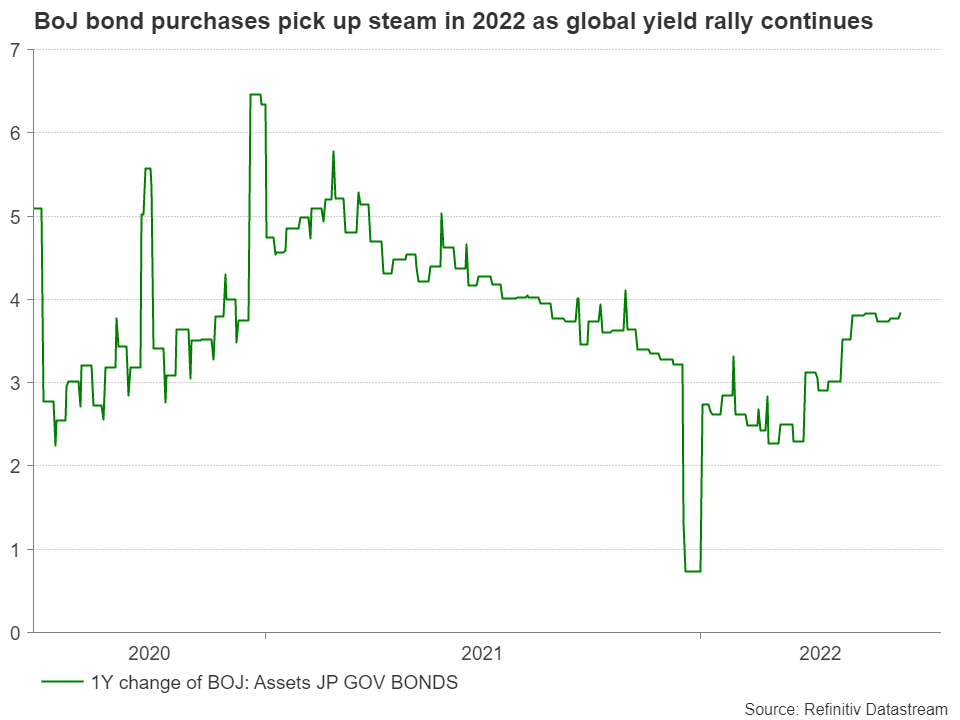 Inflation is not problematic so far

The inflation backdrop however changed suddenly when the pandemic-related supply jitters and the war in Ukraine send price shockwaves across the global economy, forcing even Japanese businesses, who are prominent for their deflationary mindset, to pass through rising production costs to consumers.

The headline CPI inflation is currently comfortably above the central bank’s 2.0% target at 2.5% y/y, while the core measure, which policymakers use as a reference for policy adjustments, is expected to remain steady at 2.1% y/y in May. That is a tight call, making any deviations likely as several major economies faced sharper price increases during the same month. 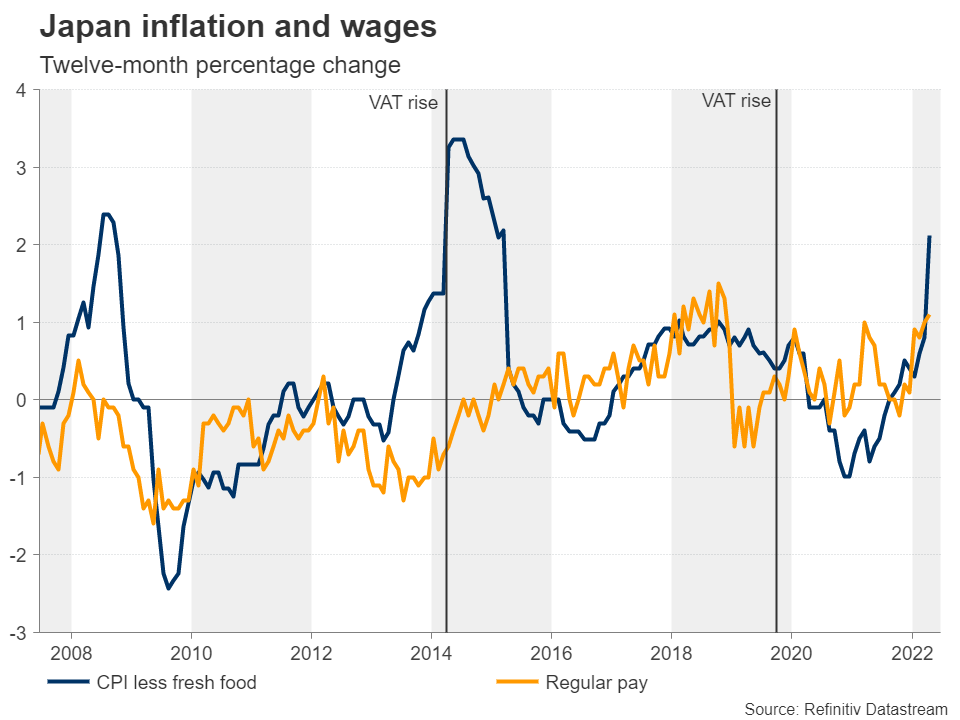 Nevertheless, if forecasts prove correct or underestimate the actual results on Friday, inflation would still be relatively less problematic than in other major economies. Hence, the BoJ will have little reason to abandon its rock-bottom interest rates before it sees a sustainable rise above 2.0% for more than a year, as the BoJ deputy governor recently argued; he also suggested that fiscal and energy policy would be a more appropriate tool to tackle price increases led by external factors, while highlighting that a potential hawkish policy change would make the economy move in the wrong direction after a soft stagnation in the first quarter.

Hence, policies other than monetary policy will remain preferable to ease inflation pressures, especially as the clock ticks down to the House elections on July 10, which Kishida's ruling party is expected to win.

How long will the BoJ stay on the sidelines?

The battle, however, will not be easy. The verbal intervention from officials has been useless so far, as growing policy divergence between the Fed and the BoJ further bolstered bond yields. Analysts estimate that the central bank has spent a record amount of $80 billion in bond purchases last week to bring the 10-year yield back to 0.25%. Outstandingly, that is triple the $27 billion monthly purchase the ECB conducts and 20 times the pace of the Fed’s in 2021, adjusting for the size between the two economies. Consequently, the huge bond buying sent the yen sinking to a 24-year low of 136.70 per dollar, raising speculation that the freefall in the currency may force the BoJ to give in sooner than expected this year.

Well, the safe-haven yen could still find buyers as long as global recession fears linger on the horizon, while a potential deterioration in the US economic outlook after July’s super-sized rate increase could signal a slowdown in the Fed tightening plans, breathing some life back to bond markets too. Also note that Japan is still well-backed by foreign reserves, holding $9.6tr in foreign assets with liabilities of $6.5tr. Therefore, a huge capital flight is less likely as long as the R word drains investors’ mind.

If downside risks prove manageable, and inflation remains elevated instead, the BoJ may declare victory over its price stability goal, likely removing its cap on yields before raising its benchmark rate. For now, an intervention in FX markers looks more likely than a policy tweak as the BoJ clearly messaged lately, especially if dollar/yen extends its rally towards the 140.00 key level.

As regards the data impact, the BoJ’s loose monetary policy is not completely warranted in the year ahead. Therefore, an upside surprise in Friday’s inflation readings could temporarily push dollar/yen lower, especially if such a result reveals that demand factors have contributed to a larger extent to price increases, elevating the subdued inflation expectations too. In this case, the pair could head for the 20-day simple moving average (SMA) at 132.78, where any step lower would bring the 50-day SMA at 130.35 next on the radar.

Otherwise, a lower-than-expected CPI could endorse the BoJ’s dovish stance, boosting dollar/yen above its latest peak of 136.70 and towards the 140.00 - 142.00 crucial zone.

Will Canada’s July jobs report be important for the loonie? – Forex News Preview