Advanced Micro Devices (AMD) is set to unveil its financial results for the last quarter of 2021 on Tuesday, January 25, after Wall Street's closing bell. The company is one of the leading and most innovative semiconductor designers in the world, thus its figures could also reflect to what extent the global long-lasting chip shortage issue has been resolved. Although earnings and revenue are expected to grow, the upcoming interest rate hike cycle by the Fed in 2022 seems to cast a shadow over the broader tech sector. Overall, the consensus recommendation from Refinitiv analysts is ‘buy’.Can the blockbuster performance continue in 2022?

AMD performed exceptionally well in 2021 for a wide range of reasons. Firstly, the expansion of remote work alongside the stay-at-home trend in the first quarter of the year kept demand for GPU, CPU and gaming consoles elevated. Moreover, retail prices for those products skyrocketed thanks to the cryptocurrency mining frenzy, persisting chip shortages and supply bottlenecks. In addition, the firm has managed to significantly increase its market share in the CPU segment mainly capitalizing on the underperformance of its major rival, Intel. 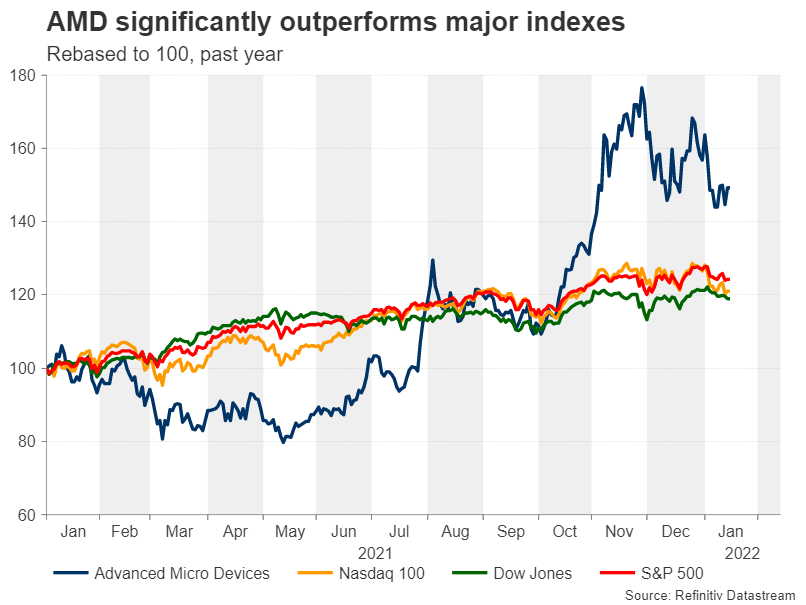 Heading into 2022, AMD appears set to deliver yet another year of impressive growth. The company is ready to seal the deal for the acquisition of Xilinx, which will most likely increase its total addressable market and enhance its profit margins. Furthermore, gaming consoles should be a substantial driver for AMD in 2022 as shipments of PlayStation 5 and Xbox, which both use AMD chips, are expected to rise. Considering that both these consoles were out of stock for the majority of Q4 due to lack of supply, the upcoming increase in production will likely turbocharge AMD’s revenues.

In early January, AMD’s strong product launches and innovative architecture updates stole the show in the consumer electronics show (CES), which is considered the biggest trade show for computers globally, increasing the odds for future growth potential. Meanwhile, the company holds $3.61 billion in cash and has an outstanding debt of $313 million, enabling it to continuously fund new developments.

AMD is set to finish the year on the front foot, but there are looming risks on the horizon. The chipmaker expected to post revenue of $4.5 billion, according to consensus estimates by Refinitiv IBES, which would produce year-on-year growth of 38.70%. Earnings per share (EPS) are estimated to rise to $0.75, representing a 44% increase compared to the same quarter a year ago.

Despite the solid fundamentals, there are a couple of risks on the radar. Firstly, the upcoming interest rate hikes by the Fed are anticipated to significantly weigh on high-growth stocks with stretched valuations. Moreover, AMD is a chip designer, which relies on Taiwan Semiconductors (TSMC) to manufacture its chips. Hence, AMD sales growth is subject to capacity constraints stemming from TSMC, which has been investing heavily itself to meet demand. Finally, selling interest might intensify when AMD starts to face a potential slowdown in growth after the chip shortage ends.

Stock price rally cooled off in 2022

After a stellar 2021 in which AMD’s stock price marched to a new all-time high, 2022 brought some weakness in the price action. Therefore, investors will be closely eyeing the firm’s Q4 earnings release for signs of further upside potential, while also assessing the upcoming risks.

In the positive scenario, bullish forces could propel the price towards $141.60. Successfully breaching this region, the price might then test the $156 barrier.

On the flipside, should the financial figures disappoint, the bears might aim for $131.50 before the price declines towards $119.

Markets seem confident that AMD can achieve its growth targets. The firm is currently valued with a forward 12-month price to earnings (P/E) ratio of 39.80, which is significantly higher than the semiconductor sector’s average of 13.70. Moreover, its trailing 12-month P/E ratio is currently at 51.86, with most of its major competitors reporting a significantly lower figure. Therefore, investors seem to be pricing in massive growth potential for the firm, whereas it could also be argued that the stock is currently overpriced. 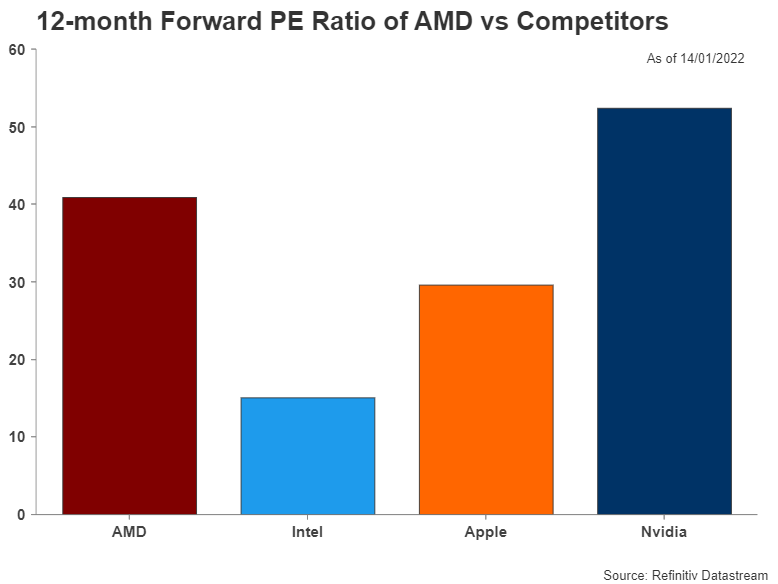