The Walt Disney Company is set to release its second fiscal quarter financial results for 2022 on Wednesday, May 11, after Wall Street's closing bell. The leading entertainment powerhouse is expected to post year-on-year revenue and earnings growth as Disney theme parks and movie theatres around the world have reached their pre-pandemic ticket sales and foot traffic. However, the real driver for markets will be the subscriber growth metrics of the firm’s streaming services. The consensus recommendation from Refinitiv analysts is ‘buy’, indicating bright growth prospects for the company.Disney underperforms

After the global economy emerged from the Covid-19 pandemic, Disney’s attractions all around the world have been working in full gear. Theme parks, hotels, and box office sales have all recovered from their pandemic-induced losses, significantly boosting the company’s revenue and profits. However, the global end of Covid-19 restrictions has proved both a blessing and a curse as Disney’s share has been massively underperforming in 2022 amid increasing fears that the firm’s streaming segment will face significant difficulties to attract new subscribers in a period of reduced demand and intensifying competition.

To make matters worse, Netflix’s latest earnings report came to reinforce the markets’ perspective that the economic reopening has hurt the streaming sector. Specifically, Netflix’s share collapsed after the firm reported a loss of 200k subscribers in the previous quarter, dragging down Disney’s stock price as well. Nevertheless, this comparison seems naïve considering that Disney has a more diversified business plan than Netflix, while its alternative segments appear to have completely recovered from their pandemic-driven slump. 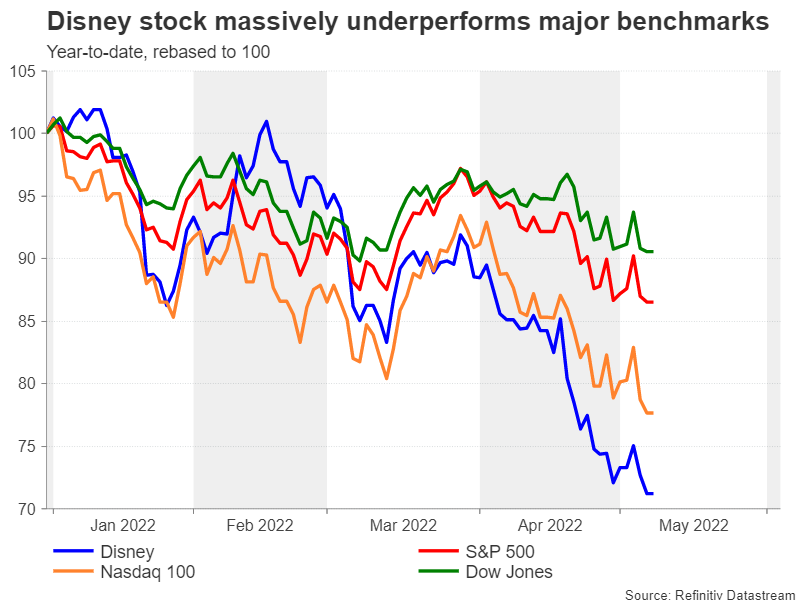 Aside from the broader negative environment, Disney also carries a substantial idiosyncratic risk.  Florida state changed Disney’s tax status and privileges due to a political argument between the firm and Florida’s Governor Ron DeSantis. This has been an immense blow for Disney, which operated under a special framework in Florida for the past 55 years as it was the largest private employer in the state, while other theme parks and resorts did not have the same status.

It's all about streaming

The fact that Disney’s share has been falling dramatically despite the rebound in its on-site facilities clearly indicates that markets seem to be more focused on the firm’s streaming segment performance. Hence, in the upcoming earnings release subscriber growth will once again take center stage, with investors looking for 4.6 million additional net subscriptions in the quarter.

A weaker-than-expected reading could substantially weigh on the company’s share price, but it is not expected to derail its long-term prospects due to Disney’s deep pool of content, which is expected to increase even more by the end of the year. Nonetheless, we have observed that investors keep punishing pandemic darlings that fail to retain their spectacular performance, thus a sell-off similar to Netflix’s could not be off the table.

Theme parks to save the day

Fortunately, Disney's theme parks have recovered swiftly, with spending per capita anticipated to be at higher levels than those in the comparable quarter of 2019. This boost could be partially attributed to the pent-up demand, which enabled Disney to raise prices on tickets without having to worry about the loss of traffic.

Moreover, the lockdowns gave Disney the chance to create and adopt premium experiences for its guests such as new rides, state of the art games, or even the ability to skip lines. In that direction, with the help of technology, the firm managed to solve the long-lasting problem of large queues that discouraged people from visiting the parks as it has now implemented mobile pre-ordering through its app.

Disney is expected to report strong financials mainly due to the reopening of its amusement parks and theatres. The world's leading entertainment conglomerate is expected to post revenue of $19.98 billion for the second fiscal quarter, according to consensus estimates by Refinitiv IBES, which would represent a year-on-year growth of 28% but an 8.5% decline relative to the last quarter.

Additionally, earnings per share (EPS) are estimated to increase from $1.06 in the previous quarter to $1.18, with the figure also increasing 49.40% on an annual basis.

Although Disney is anticipating a slowdown in subscribers’ growth, investors and markets appear confident that it can achieve its growth targets. This optimistic outlook is also reflected in its hefty forward price to earnings ratio of 21.5, which is substantially higher than those of its major competitors and denotes the dollar amount someone would need to invest to receive back one dollar in annual earnings. 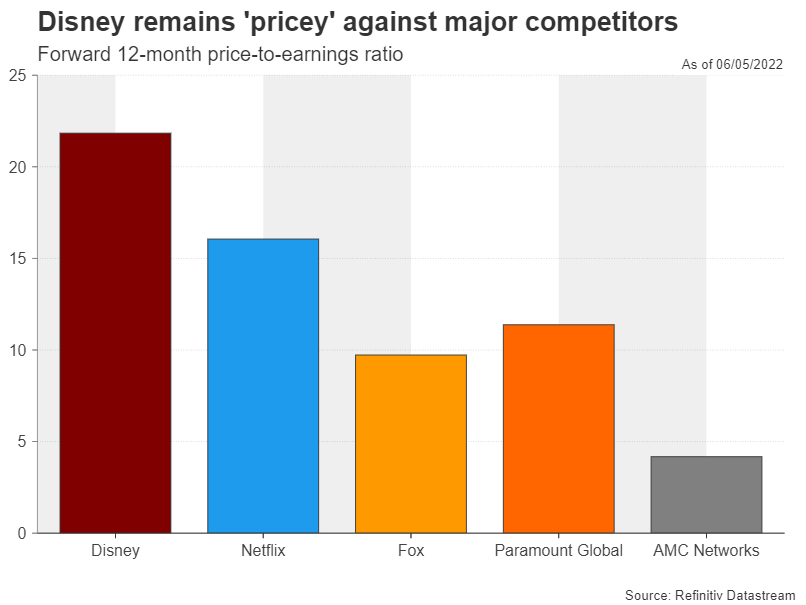 On the brighter side, Disney holds a trailing 12-month price to earnings (P/E) ratio of 31.2 (as of May 5, 2022), making the firm amongst the few profitable companies in the sector, which has an average P/E ratio of -1.5.

After a stellar 2020, Disney’s share price peaked at $203 in February 2021, and since then it has been experiencing a sustained downtrend. Therefore, on Wednesday, the second fiscal quarter’s earnings release could provide the opportunity to shift the firm’s outlook back to positive and halt the persistent sell-off.

In the positive scenario, bullish forces could propel the price towards $116. Successfully breaching this region, the price might then test the $133.5 barrier.

On the flipside, should financial figures disappoint, the bears might aim for the 2022 low of $108, which also provided strong support in May 2020. A violation of this region would turn the spotlight to $98.5.