Despite last week’s upbeat business data, the pound could not gain buying traction thanks to the dollar’s strength and rising concerns about how the UK-EU trade negotiations will develop later in the year. On Tuesday at 09:30 GMT, preliminary GDP growth readings for the final quarter of 2019 and December’s industrial production data will come out of the UK but the figures may prove unable to boost the British currency as traders are shifting attention to new year’s numbers.

Upbeat PMIs could not help the pound

Last week, the closely watched Markit/CIPS services PMI for January rose by almost four points above the 50 level that separates contraction from expansion and reached the highest level since September 2018. The manufacturing equivalent also surprised by increasing significantly to 50, while the construction industry – although remaining below that threshold – gained the most, all signaling that the approval of Boris Johnson’s withdrawal agreement from Parliament in December has likely started to work through the economy. 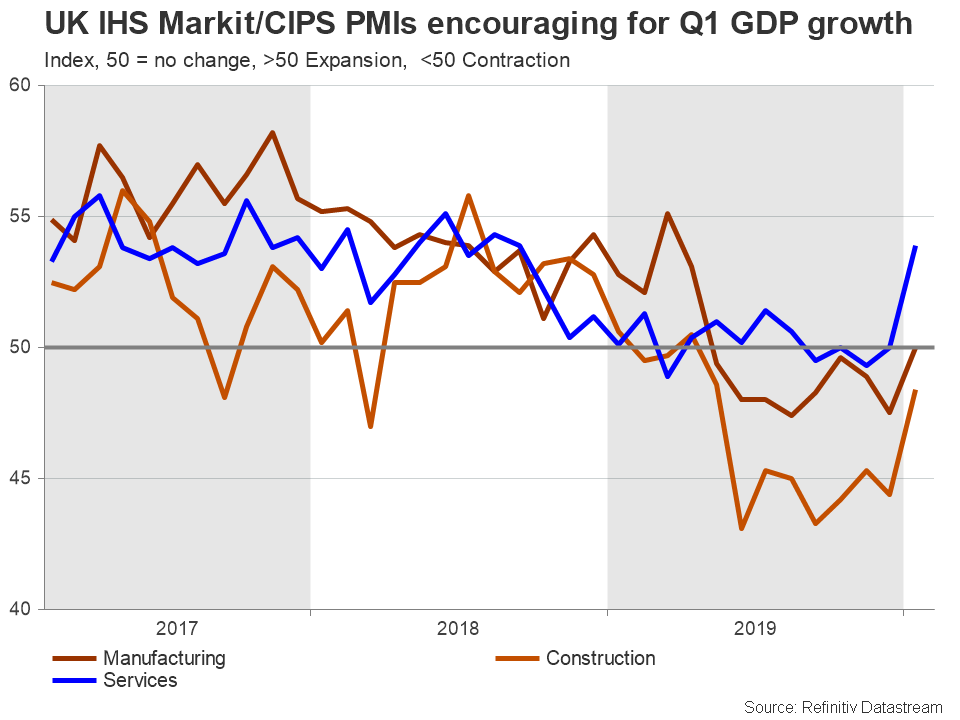 Disappointingly, though, the pound could not capitalize on the news as an exchange of comments between the EU and the UK reminded markets that  trade negotiations between the sides that start on March 3 will not be an easy task and a hard Brexit is still a likely scenario given Johnson’s pledge not to extend the transition period after the end of the year. While both sides want to secure a trade deal, they have a different vision on how this could be established in regulatory terms. In particular, the British PM wants a free trade agreement that will be a function of the UK’s new regulations, whereas the bloc asks compliance to its own rules for full access to the single market.

Q4 GDP growth and industrial production data may be shrugged off

The Bank of England also appeared reluctant about how Johnson’s government will handle trade talks in the coming months at January’s policy meeting, downgrading its growth forecasts for the next three years. Despite its Brexit concerns, however, the Bank refused to ease monetary policy as other central banks have done already, saying instead it had detected post-election growth signs and should the strength in the data persist later in the year, a rate cut may not be on the cards.

For the above reason, traders will be closely monitoring future data releases to track the impact of political uncertainty on the economy, especially now that the UK government is preparing to boost fiscal stimulus in Q2. Yet, Tuesday’s release regards a pre-Brexit period and hence could be shrugged off as recent PMI readings have already warned about a brighter start to 2020. Nevertheless, the figures will be worth watching as preliminary GDP growth readings are forecast to show a weaker annual expansion of 0.8% for the final three months of 2019 compared to 1.1% in the previous quarter even though the economy is said to have doubled growth to 1.1% y/y in December. In other data, industrial production is expected to have fallen at a softer pace of 0.8% y/y in December versus a 1.6% decline in November, with the manufacturing output also easing its downfall from 2.0% y/y to 1.1%. 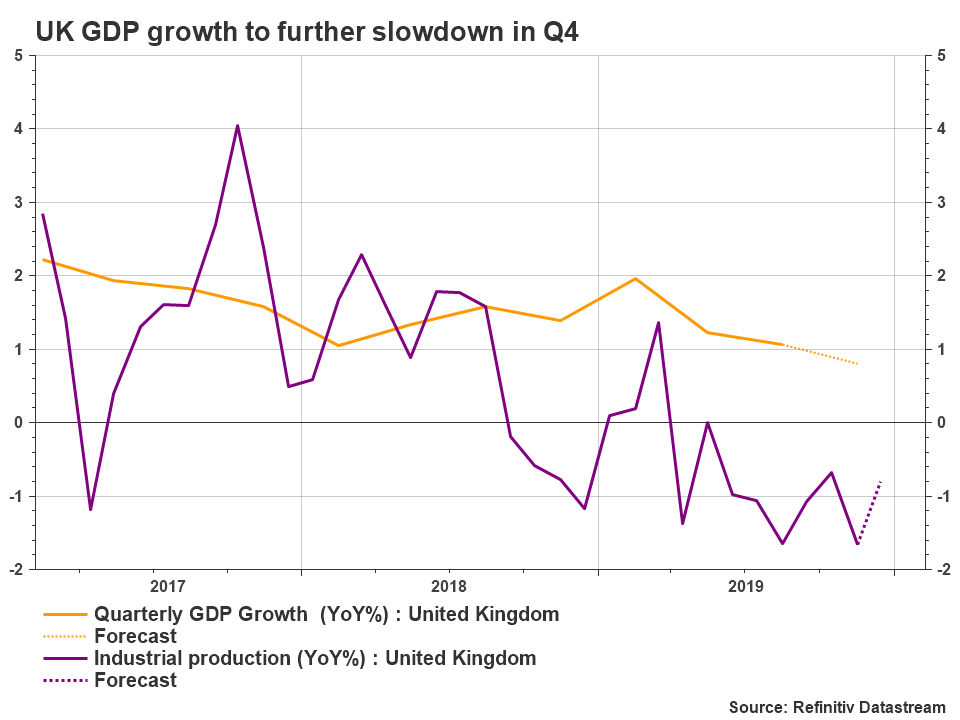 As for the pound, there is little hope that the outdated data will cause any meaningful movement in the pound on Tuesday unless more Brexit-related or coronavirus news affect risk sentiment. Still, against the US dollar, the currency is currently trying to hold above a key support area around 1.2900. If these efforts prove unsuccessful, the market could see more weakness, with the price probably heading to 1.2780. Otherwise, should Cable close comfortably above 1.2900, the door would open for the 1.3000 mark, while the 20- and 50-day simple moving averages (SMAs) would also be in focus before attention shifts to the 1.3170 barrier.