RBA meeting and GDP data up next, as aussie licks its wounds – Forex News Preview

The Reserve Bank of Australia (RBA) will complete its latest meeting at 03:30 GMT on Tuesday, and markets expect no action this time. The aussie’s reaction will therefore depend on the signals for future rate cuts. Judging by the deterioration in recent data, policymakers are likely to strengthen their easing bias, which could exacerbate the currency’s losses. GDP data for Q3 and retail sales for October will follow on Wednesday and Thursday respectively, at 00:30 GMT.

The clouds hanging over the Australian economy seem to be growing darker, recent data suggest. The labor market weakened in October, wage growth lost steam in Q3, while capital expenditure by businesses continued to run negative – an ominous sign. Adding insult to injury, the nation’s composite PMI fell into contractionary territory in November, indicating that growth will likely struggle in Q4.

All this was released after the RBA’s latest meeting, where the central bank signaled it will ‘pause’ its rate cutting cycle for a while. The weaker domestic data pulse – coupled with doubts about the ‘phase one’ trade deal and a stronger US dollar – saw the aussie sink in November, with aussie/dollar falling back towards the decade-low reached in October.

While no action is expected this week, markets still assign a 65% probability for a rate cut in February. The question now facing the aussie therefore, is how strong the RBA’s easing bias will be. The last time, policymakers said they are prepared to ease further “if needed”. If the Bank uses even stronger language this time – and for example hints that the case for further easing has been bolstered by the weaker data – then the probability for a February cut could soar higher, pushing the aussie lower. 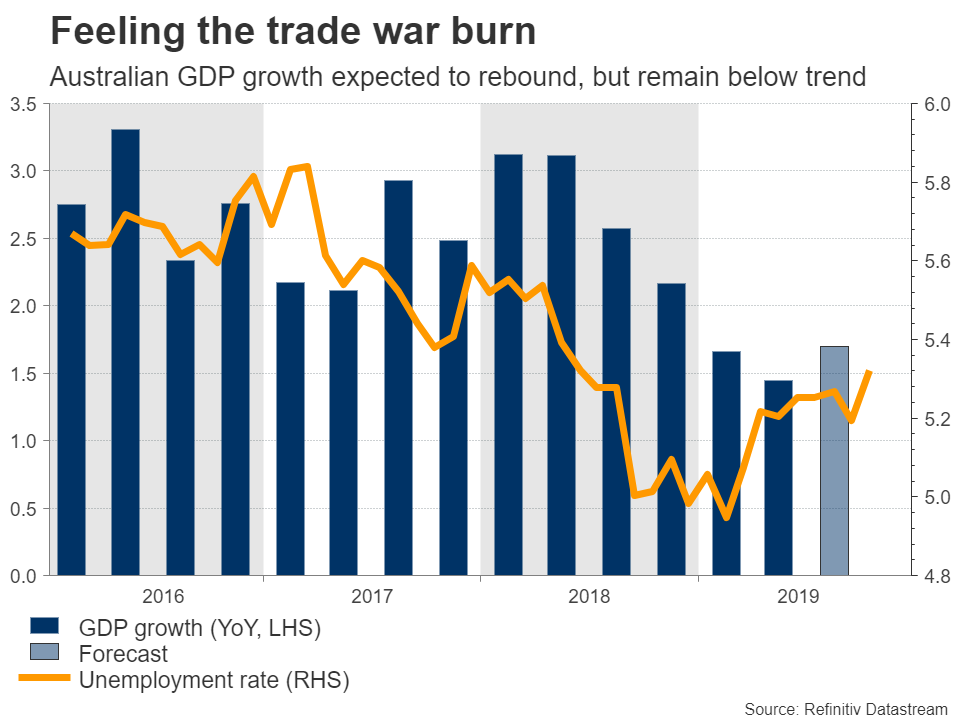 Key data will follow, with GDP growth for Q3 forecast at 0.5% in quarterly terms, the same pace as in Q2. While that would push up the yearly rate to 1.7% from 1.4% previously, such a print would hardly be reassuring. Australian GDP growth typically runs around 2-3%, so this would be a below-trend figure. Perhaps a more encouraging sign will come from the retail sales for October, which are expected to have risen by 0.3% in monthly terms, from 0.2% earlier.

Trade remains the overarching driver, though

In the bigger picture, the aussie’s performance will depend mainly on how the trade war plays out. Given Australia’s export-driven economic model, this may be the most important variable for whether and how soon the RBA cuts again.

While the trade talks have fortunately not fallen apart, the two sides seem to have hit a wall, unable to agree on whether and by how much the existing tariffs should be rolled back as part of the ‘phase one’ deal. Other sticking points include how China will guarantee the agricultural purchases it has pledged. Yet, the market has shrugged off these worries so far, instead focusing on reports that Trump is likely to hold off from imposing the next round of tariffs – scheduled for December 15 – to keep the deal alive.

The bottom line is that investors look overly optimistic, without much justification. By no means is it certain that Trump will cancel the upcoming tariffs, and even if he does, that would still not bring the ‘phase one’ deal any closer. More broadly, if the two sides can’t sort out an issue as simple as a timeline for rolling back tariffs, what does that say about the chances of getting to a real agreement on the complex matters, like industrial subsidies and intellectual property?

The overall outlook for the aussie therefore remains bleak, as even if a phase one deal is reached, there’s probably little prospect for any further progress after that.

Taking a technical look at aussie/dollar, initial support to declines may come from the 0.6750 area, where a downside break would turn the focus to 0.6720.

On the upside, the first obstacle could be the intersection of the 0.6810 zone and the 50-day simple moving average. Even higher, the bulls may encounter a stronger barrier near 0.6880.