Australia is caught in the middle of the Sino-US trade war and although conditions seem to be getting worse rather than better, clouding the country’s economic outlook, the Reserve Bank of Australia is not expected to deliver further monetary easing when it announces its rate decision on Tuesday at 0430 GMT. The pause, however, could be only temporary.

Its tied trade relations with China makes the commodity-linked Australian economy quite vulnerable to the Sino-US trade war and despite cutting interest rates twice this summer by 25bps, the RBA is likely to say on Tuesday that more stimulus could follow in the year ahead if the circumstances warrant it.

In the context of a slowing global and domestic economic growth and weak wage increases, lower interest rates could be a fast solution to buffer the economy from upcoming headwinds. The White House raised tariffs on a variety of Chinese goods including technological items to 15% on Sunday and Beijing retaliated by imposing 5% levy on US crude imports. A move that could bring bigger economic disruptions in China and subsequently more downside in the already struggling Australian business sector that is heavily relying on Chinese demand.

Capital expenditures by Australian businesses declined more than expected in the second quarter due to falling construction activities and investors are currently projecting that the Q2 GDP report could also disappoint on Wednesday (0230 GMT) as the heightened external uncertainty makes any project even riskier to commit to. 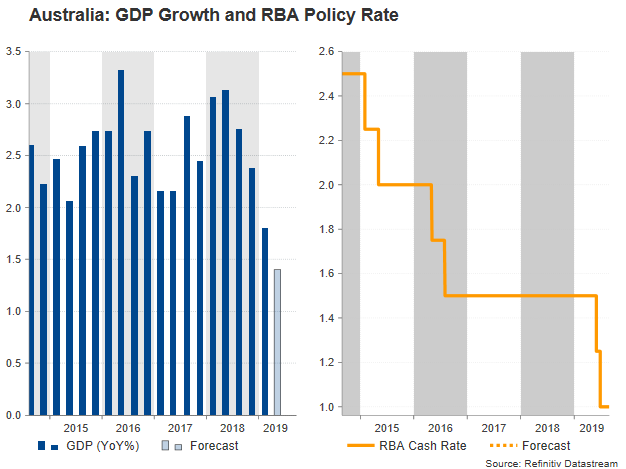 A more accommodative monetary policy accompanied with fiscal support in China could provide some footing to Australian exporters. On the negative side, however, the economy could get exposed to financial distress if households ask for more credit, elevating the already mounting debt levels even higher.

Hence the RBA, unlike other major central banks, could be trapped in a double bind and any future monetary decision could get complicated if the trade game turns tougher in the next months.

Nevertheless, if other central banks turn more dovish, slashing rates more aggressively and boosting liquidity through asset purchase programs (QE), the RBA could follow suit to avoid any upside pressure in the Australian dollar, with the RBA governor Philip Lowe saying earlier this month that a QE program could be possible only if rates approach the zero level.

Turning to Tuesday’s rate decision, the RBA could safely keep rates steady at a record low of 1.0% and instead closely monitor the impact of its June and July cuts on data before taking its next policy decision.

Yet, should policymakers use a more cautious language, keeping the door open for more stimulus, the Australian dollar could revisit the 0.6690-0.6670 strong support area against the dollar before hitting the 0.6600 round level.

Otherwise a milder tone from the RBA could help AUDUSD to run above the shorter-term simple moving averages (SMAs)  in the four-hour chart and reach the 0.6780-0.6810 restrictive zone.