The Reserve Bank of Australia (RBA) is setting interest rates on Tuesday at 04:30 GMT and markets expect another rate cut as key metrics continue to miss targets while external risks keep lingering in the background. Yet not all signs point to more easing as there is something Australia is not proud of and other counterparts do not face intensely, and this is called: household debt.

While the Australian upward-moving trade surplus indicates surprisingly that there is not much damage coming from the US-China trade war, the RBA Governor acknowledged last week that further monetary easing may well be required to boost economic growth and address its dual mandate of driving inflation to 2.0% and achieving full employment conditions.

Despite the government reducing taxes for low and middle-income earners and the central bank slashing rates twice by 25bps in June and July, the unemployment rate rose to 5.3% in September. Compared to the August reading of 5.2% such an increase is not much of a difference. Still, in terms of monetary policy, this is well above the 4.5% unemployment rate the RBA wants to achieve in hopes that the subdued wage growth could eventually heat up, pushing the headline inflation to the 2.0% target in the aftermath.

What makes it worse, however, is the outlook for consumption. In the second quarter, the Australian economy printed the slowest expansion of 1.4% y/y since financial crisis, revealing that government expenditures and falling imports rather than household spending are keeping GDP growth in positive territory – something not very sustainable for the Australian economy. Retail sales were more evidence recently, missing forecasts by a large margin to post a negative growth in July. 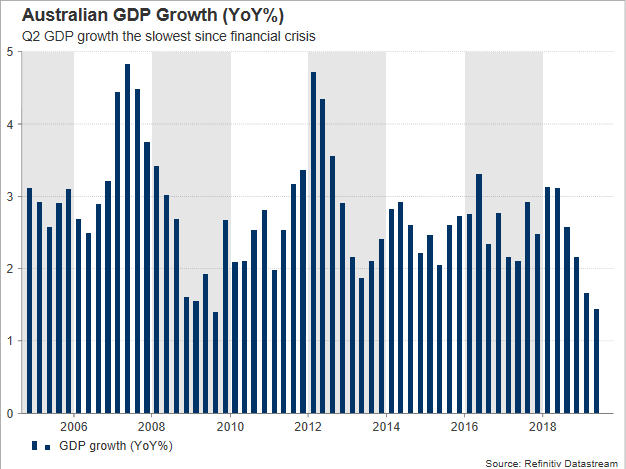 Without consumer support and business investment plans in a standby thanks to the escalating trade uncertainty and the Brexit turmoil, the RBA has no other option but to ease monetary policy to keep the Australian currency competitive as similar stimulus actions by the Fed and other major central banks could strengthen the aussie.

Policymakers are expected to make the next move this Tuesday and cut interest rates to 0.75% but this is not the end of the story as Philip Lowe left the door open for further easing in the year ahead.

Markets are currently seeing a fourth rate cut coming between November and December as a coin toss, something that could prove reasonable if upcoming data arrive worse-than-expected and political conflicts escalate.

Indeed, a more accommodative monetary policy could theoretically save Australia from sharper downfalls in case its main trade partner China and generally the global economy faces more downside pressure. Uncomfortably though, lower borrowing costs could increase demand for credit at a time when household debt is already mounting and wage growth is gradually rising, while house prices could also heat up. Even if there are no red flags around the matter yet, the central bank should be closely watching the effects of its actions on household debt and the housing market. 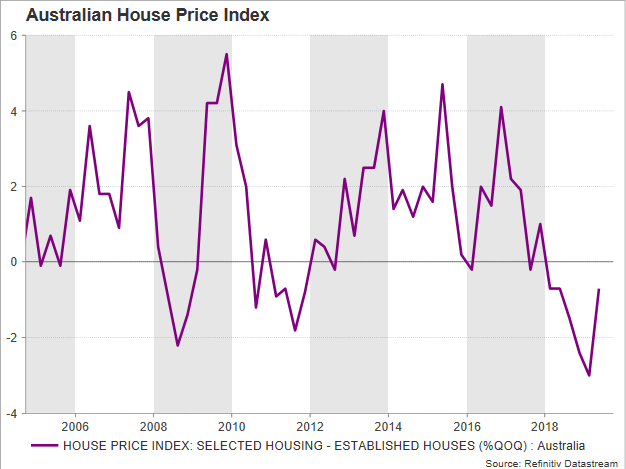 As regards FX markets, the Australian dollar continues to feed the more than 1½-year old downtrend with the US dollar. A more dovish rate statement and more cautious remarks by the RBA Governor on Tuesday could see a retest of the 0.6745-0.6700 support area this week, a break of which could further strengthen negative momentum.