The Reserve Bank of Australia is almost certain to keep monetary policy unchanged on Tuesday when it announces its decision at 4:30 GMT. Australia is one of only a handful of countries that can boast a successful virus containment policy and that success bodes well for its economy as it allows the RBA to take a backseat, which in turn is boosting the local dollar. However, with even Australia now facing a resurgence of coronavirus cases in some districts, will the RBA strike a more cautious tone?

The Australian state of Victoria reported 77 new cases of Covid-19 on Thursday – the state’s highest daily increase since the onset of the outbreak. The latest spike, which is mostly concentrated in the city of Melbourne, has taken the country’s total tally above 8,000 cases, raising fears of a wider resurgence. However, those numbers are still relatively low compared to other nations of a similar population size, and with authorities acting swiftly in placing a number of Melbourne postcodes under lockdown, markets aren’t yet worried about Australia’s setback.

Nevertheless, if such flare-ups become more frequent and so too do local lockdowns, they run the risk of slowing down the economic recovery as business reopenings are disrupted and consumer confidence is dented. A sustained recovery is essential to restore jobs in the virus battered labour market. Employment fell by a larger-than-expected 228k in May, with the jobless rate jumping to a near two-decade high of 7.1%. That comes on top of April’s drop of 594k and the numbers do not even account for the jobs that are being temporarily protected by the government’s wage subsidy scheme. 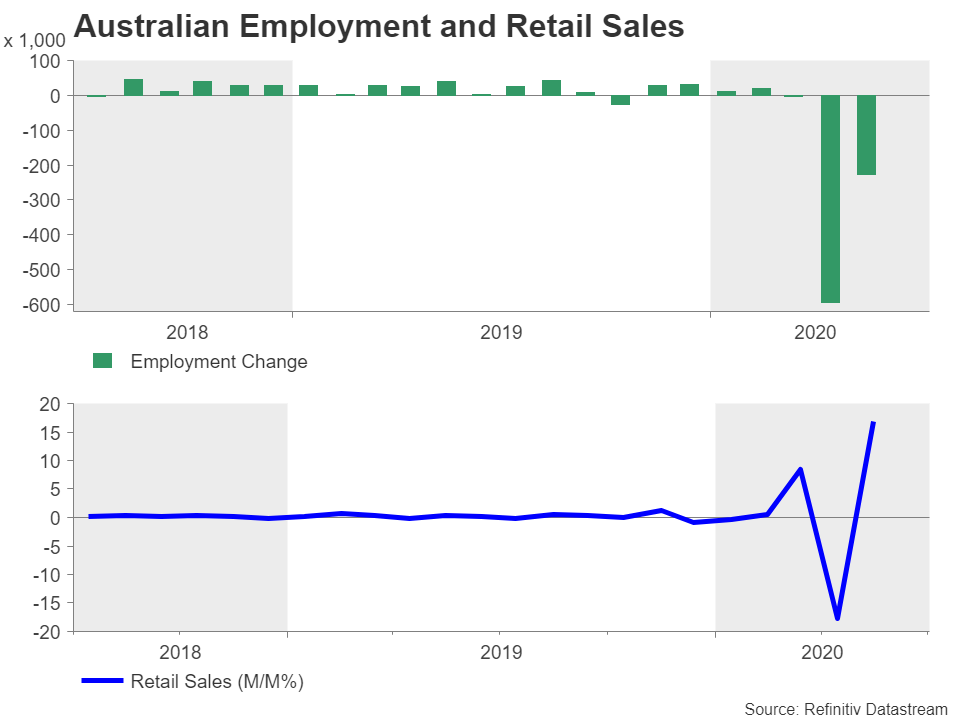 Full employment is one of the RBA’s three mandates so should the recovery in the jobs market hit a stumbling block from persistent virus woes, the central bank might feel obliged to pump more stimulus. For now, though, while the RBA maintains a ‘whatever it takes’ pledge in line with other central banks, all the indications are that it will be sitting on the sidelines for the next few months.

The RBA has already scaled back on its asset purchases and ruled out negative interest rates – something that its peers like the Reserve Bank of New Zealand, Bank of Canada and the Bank of England are not ready to do. That gives the Australian dollar a competitive edge among the riskier currencies. 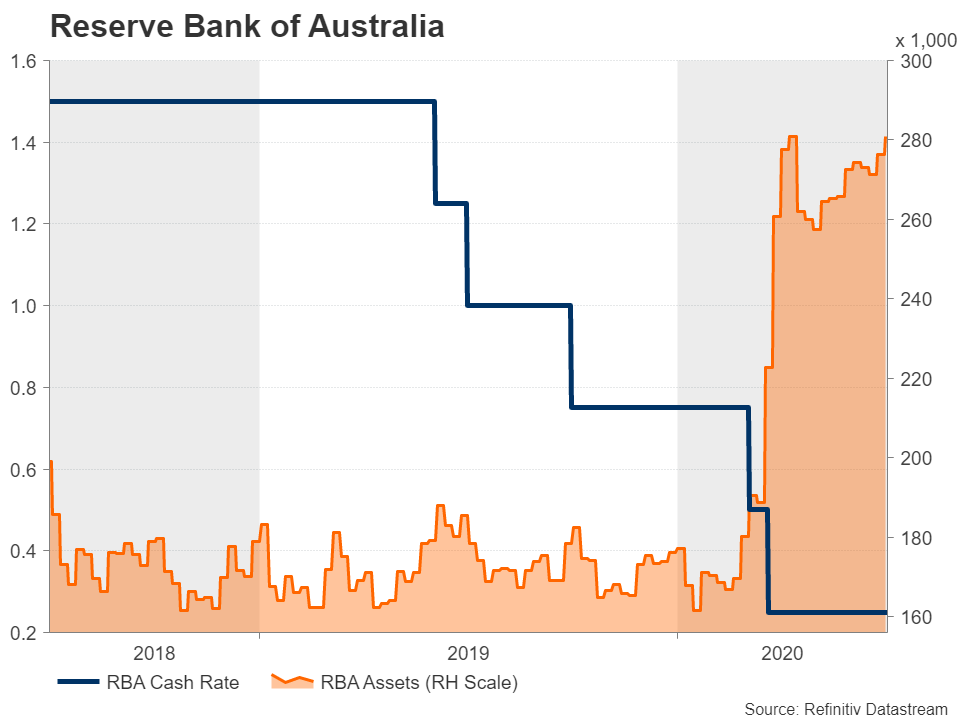 The aussie/dollar pair just recorded a bullish crossover of its 50- and 200-day moving averages (MA) and is poised to the reclaim the 0.70 level should risk appetite strengthen and the incoming data point to a continuation of the recovery as many parts of the economy return to normal.

Australia’s manufacturing and services PMIs bounced back strongly in June and retail sales almost fully rebounded in May from the April slump. Further optimism could see aussie/dollar stretch its gains to the 0.72 level, which may not seem so far-fetched given Australia’s economic outperformance.

RBA Governor Philip Lowe recently acknowledged that the downturn is “not as severe as we expected”. However, Lowe also hinted he would prefer to see a weaker exchange rate in the future. Hence, a stronger aussie is more likely to bring out the doves in the RBA than disappointing economic data.

Should policymakers directly raise concerns about an appreciating exchange rate or sound worried about the effects of the recent outbreak in Victoria, aussie/dollar could retreat towards the 0.68 support region. Breaching this mark would shift focus to the 0.6705 level, which is the 78.6% Fibonacci retracement of the January-March downtrend and where the 50-day MA is currently headed towards.