The Reserve Bank of New Zealand will wrap up its policy meeting at 02:00 GMT Wednesday, and while no action is expected, the choice of language could be crucial. Recent developments in New Zealand have been encouraging, which alongside stronger risk appetite globally, have catapulted the kiwi much higher. So high in fact, that the RBNZ may be feeling a bit uncomfortable with its current levels. Will policymakers ‘talk down’ the currency?

Virus free, ahead of schedule

New Zealand is among the few nations that can say they’ve successfully eradicated the deadly virus, which is great news for everyone – including the RBNZ – as the economy has exited its lockdown much earlier than policymakers had expected in their latest forecasts. That allows for a less damaging recession and a quicker return to economic growth.

Of course, it’s not all rosy. No matter how you slice it, some sectors like tourism will be decimated as long as international borders stay closed. Meanwhile, there’s also the global picture to consider – if world demand is soft for some time, what does that imply for New Zealand’s export-driven economic model?

Optimistic, but not much

Hence, while recent developments have surely been better than expected, the RBNZ will be careful not to sound too optimistic, as doing so could propel the kiwi dollar even higher. The NZD has gained some 18% from its March lows and is now comfortably above its pre-covid levels, which will be a concern for policymakers. 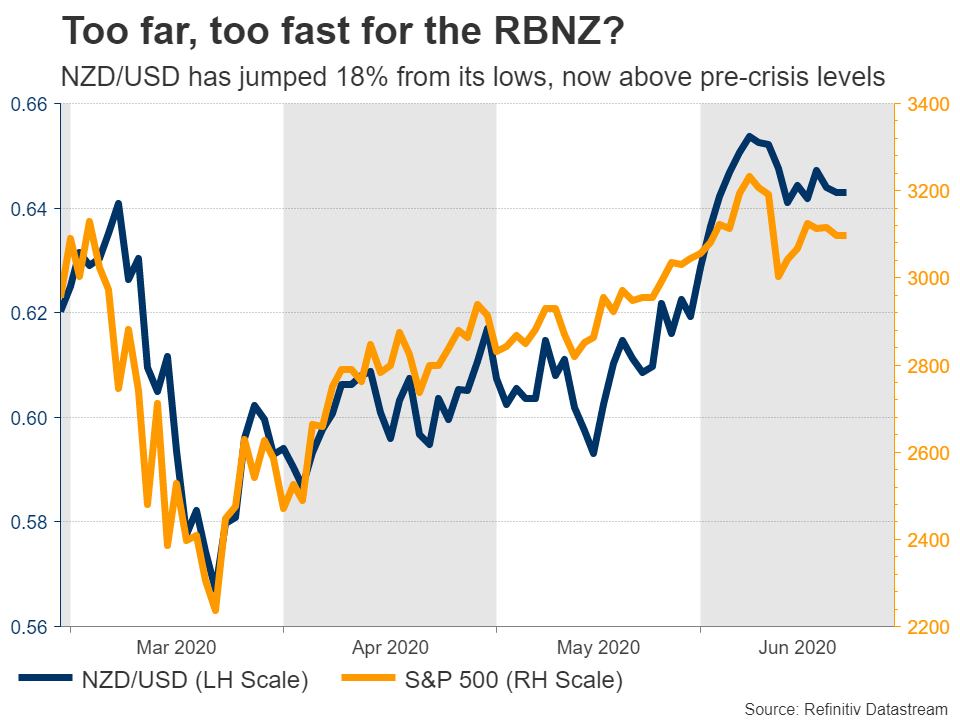 A stronger currency makes a nation’s exports less competitive abroad, tightens financial conditions, and exerts negative pressure on inflation – all of which the Bank wants to avoid as they could lead to a slower recovery.

So, what’s a central banker to do?

Given the circumstances, further stimulus is probably not needed, but saying so could add more fuel to the kiwi’s ‘undesirable’ advance. Hence, while policymakers will likely highlight the encouraging developments, they will probably also reaffirm that they stand ready to do more if needed.

Now exactly how forcefully they signal that, will determine the kiwi’s reaction. For instance, if they simply reiterate that they are prepared ‘to use more policy tools if and when needed’ – which is what they said in the last meeting statement – the kiwi could shoot higher because investors might take that as a signal the RBNZ is not overly concerned with the exchange rate.

In this case, kiwi/dollar could spike up to challenge the resistance zone of 0.6505, where a break would turn the focus to the recent high of 0.6585.

On the other hand, if they change that final paragraph to include an explicit reference on using negative rates for example, or better yet, if they mention the kiwi directly as a cause of concern, the currency could sink.

Remember, back in 2017 the RBNZ threatened direct FX intervention to weaken the kiwi, though that’s probably not necessary now. Just mentioning the exchange rate in the statement could do the trick.

In this scenario, kiwi/dollar could drop for another test of the 0.6390 – 0.6370 support region. If violated, the bears would then turn their sights to the 0.6260 zone, where the 200-day simple moving average (SMA) is resting as well.