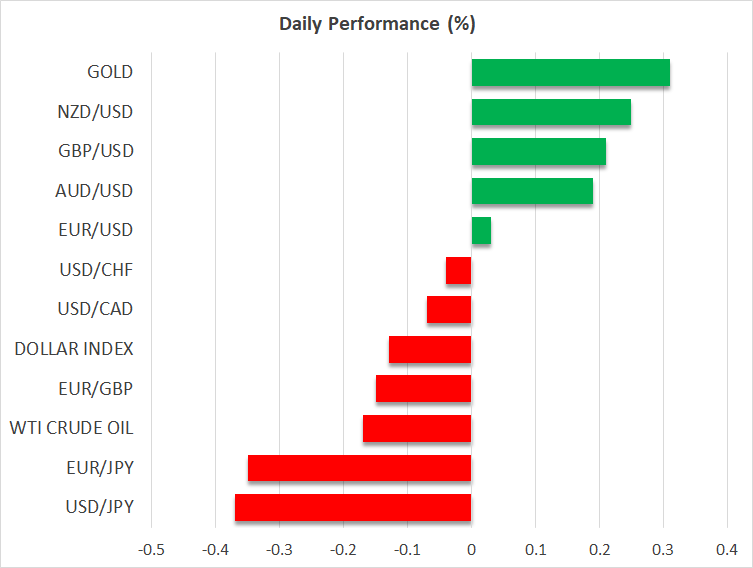 The battle for the US dollar is unfolding in the FX arena, with the reserve currency having just broken crucial support regions across several charts. Euro/dollar has powered above the decisive $1.20 zone, while dollar/yen crossed swords with the 108.40 support barrier and managed to pierce through. When major pairs break out in tandem like this, it is often a stronger trend signal than any 'solo' violations.

Fundamentally, the recent revival of euro/dollar seems linked to investors second-guessing themselves about the timeline of Fed rate hikes and the accelerated pace of vaccinations across Europe. The Fed insists it won't react to any inflation episode and that it will stick to its word not to raise rates prematurely, a message that senior policymakers have finally managed to hammer home. The ecstatic mood in stock markets is also positive for the pair.

For now, these breaks have turned the technical outlook more neutral. The next test for euro/dollar is the $1.2020 barrier, to determine whether this is a 'false breakout' or a real one. In the bigger picture though, the scope for a powerful rally from here seems rather limited. A lot of the encouraging European vaccination news is likely priced in at these levels, while the US economic data pulse is tremendously powerful and could strengthen further, thanks to the ongoing spending blitz.

In contrast to currency traders, equity investors appear much more confident about the outlook, with Wall Street setting new record highs on Friday. The usual themes seem to be running the show. An extravaganza of federal spending in America has eliminated several near-term risks and any Fed rate increases are still far into the future.

Even Chinese stocks are higher today after local regulators played down some concerns around a large distressed debt manager, calming market nerves about contagion in case of default by essentially signaling that the weight of the state is behind the troubled entity.

Overall, it looks like clear skies for equity markets. Policymakers are still holding investors by the hand and vaccination programs have accelerated dramatically. The only real risks on the radar are excess inflation that leads the Fed to shift gears abruptly, some new vaccine-resistant variant, or the geopolitical temperature rising further in critical theaters like Ukraine or Taiwan.

Over in the commodity sphere, gold has staged a comeback. The metal triumphed over the $1765 region, signaling the successful completion of a double bottom pattern, with a little help from a declining dollar and the setback in Treasury yields. There are also reports that the Chinese government is encouraging local banks to increase their exposure to bullion, perhaps in a strategic move amid sour US-China relations.

As for today, the main event will be the Canadian government budget at around 20:00 GMT. Reports suggest it will include a sales tax for online platforms and a tax on properties owned by non-residents, in an attempt to cool the nation's sizzling hot housing market. How much taxes are raised will likely drive the intraday reaction in the loonie.

Meanwhile, the earnings season will fire up with Coca Cola and IBM releasing their quarterly results. The rest of the week will be more exciting, with policy meetings from the Bank of Canada and European Central Bank.