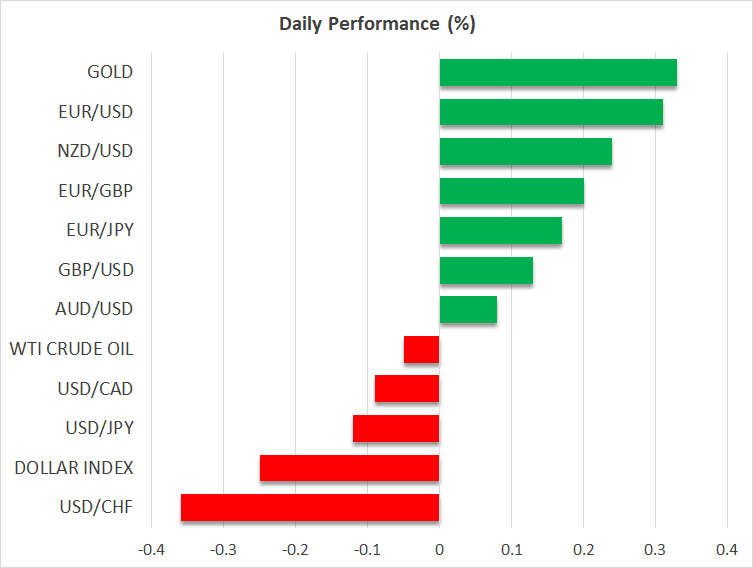 The inflation scare on Wall Street turned out to be 'transitory' after all. The major stock market indices managed to claw back some of their losses for the week after some Fed officials dispelled the notion that this inflation episode is enough to make them consider scaling back their asset purchase program.

Specifically, the latest addition to the Fed's Board of Governors – Christopher Waller – said he'd like to see several more months of strong data before any shift in policy becomes appropriate, downplaying fears of a tapering debate.

Of course, the recovery started long before Waller spoke yesterday, which suggests that the buy-the-dip mentality is still alive and well. Several investors seem to have capitalized on this retreat to snap up their favorite tech and growth names at discount prices, cognizant that the Fed won't break up the cheap-money party until late summer or beyond.

And who can blame them? There's just no realistic alternative to stocks that offers any real returns. Bonds have turned into a return-free risk asset in a rising inflation environment and commodity markets are too small to accommodate the large players, not to mention the elevated prices at present and their inherent instability. Equities are still the only game in town, as they can also serve as an inflation hedge.

In the FX arena, the dollar came back under pressure as the Fed played down expectations for a QE rollback, unable to draw strength even from another acceleration in producer prices that might further boost consumer inflation soon.

With the Fed not moving on its policy stance, it's probably too early for any sensational dollar gains. That said, the upcoming retail sales are a wild card. We've seen some contradiction in US data recently, with labor market indicators falling short but inflation stats being on fire, so the might of consumer spending could be what tips the scales.

If retail sales beat forecasts significantly, that could reignite the tapering debate. The dollar would likely benefit but the reaction in stocks is unclear since investors would have to weigh a stronger economy against the risk of less Fed liquidity. It would depend on the size of any surprise. If they disappoint, that could vindicate the Fed's patience and send the dollar lower.

As for the risks around the forecasts, they seem balanced. April was a great month for the recovery, with widespread vaccinations and stimulus checks enabling spending as the economy reopened, but even so, a setback wouldn't be surprising either considering how spectacularly strong last month's print was.

The Governor of the Bank of Canada jawboned the local currency yesterday, saying that the Canadian dollar has strengthened beyond their expectations and that if this trend continues, it could impact their policy decisions. The loonie has gone on a rampage lately as the BoC scaled back its QE program, with elevated oil prices and rapid vaccinations also playing a role.

The currency took a small step back this week as the US dollar came back to life and oil prices retreated, but the broader picture still seems positive. Outside of trying to talk down the currency, there isn't much else the BoC can do to sink it. More QE is off the table.

Technical Analysis – US 30 index retreats below SMAs in short-term