Speculation that the US economy may already be in a recession is running rife so the latest jobs report released on Friday (12:30 GMT) will play a crucial role in heightening or allaying those concerns. Ahead of that, the Federal Reserve is more likely than not to stoke recession anxiety as the minutes of the June FOMC meeting out on Wednesday (18:00 GMT) are expected to reinforce policymakers’ resolve to get a grip on soaring inflation. All the panic about an economic downturn is bolstering the safe-haven US dollar, though its rally versus the Japanese yen has cooled lately. A slowdown or a recession?

It wasn’t that long ago that a recession in America was merely a low-risk threat and a mild slowdown was the more realistic scenario. But key economic pointers have started to deteriorate rather rapidly lately and the ISM non-manufacturing PMI due Wednesday could be the next data point to turn ugly in June. Serious doubts are now emerging about whether the Fed can bring inflation under control without triggering a recession.

Personal consumption – long considered the primary growth engine of the US economy – appears to be slowing, and in real terms, it fell by 0.4% m/m in May. What is more worrying is that real wage growth has been negative for the past year and without any fresh stimulus checks, Americans have been drawing down on their savings as the price spikes of gasoline and other essential goods have started to bite. Exacerbating the squeeze on consumers are the mounting year-to-date losses on Wall Street and the slowdown in the housing market, which are eroding household wealth for many Americans. 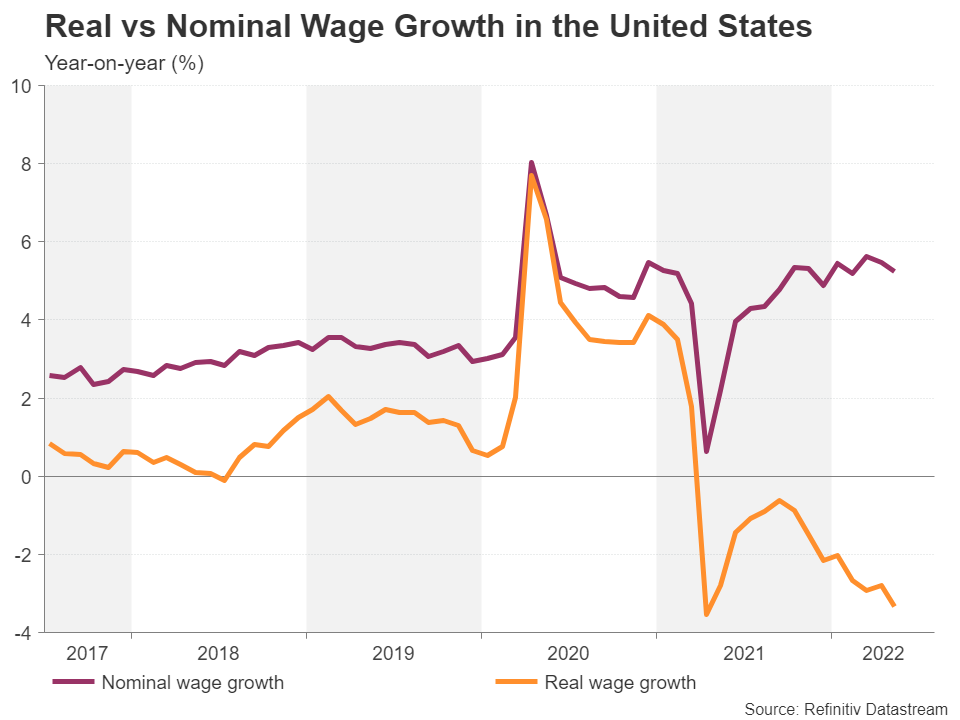 Wage growth not keeping up with inflation

A pickup in wage growth could go a significant way in restoring consumer confidence (a closely watched gauge slumped to a 16-month low in June). But despite the ongoing shortages in some sectors and an overall still very tight labour market, there has been no out-of-control wage-price spiral and the rise in average hourly earnings has been relatively contained, averaging around 5.5% y/y in the first five months of the year. In fact, wage growth seems to be losing some steam and is expected to have moderated for the third straight month to 5.0% y/y in June.

On the plus side, the economy continues to churn out jobs at a healthy clip and nonfarm payrolls are expected to have risen by 268k in June, down from 390k in May. The unemployment rate likely held steady at 3.6% during the month. 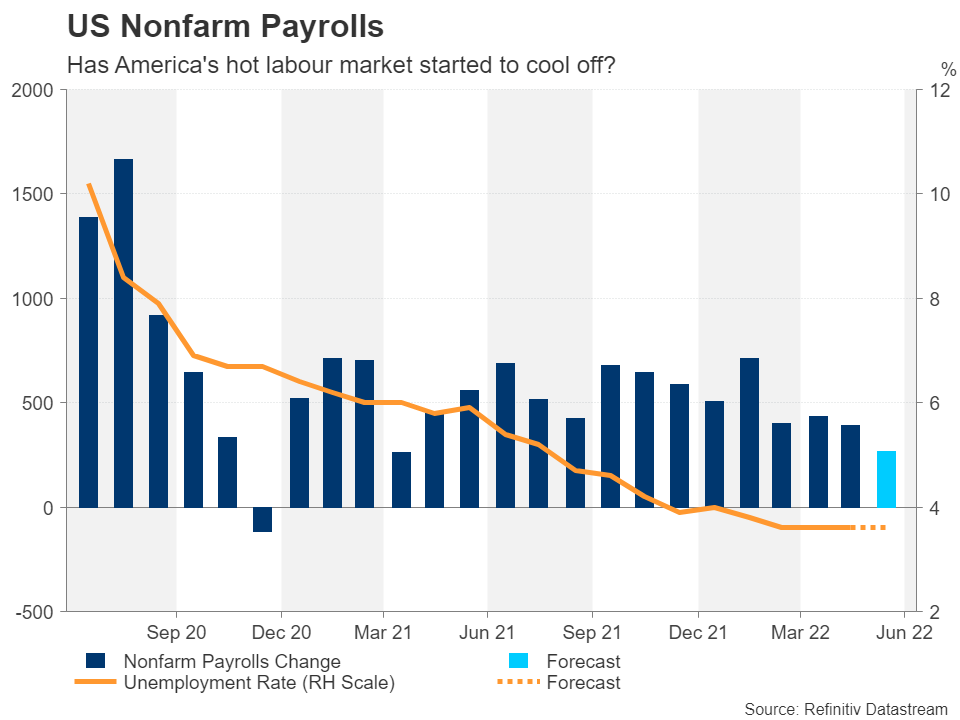 Fed tightening expectations are being pared back

Any disappointment in the headline NFP figure would add to worries about the health of the economy, further dampening Fed rate hike expectations, which have been sharply scaled back since mid-June. Investors have roughly priced out about 75 basis points of rate increases for next year and are even betting that the Fed will begin slashing rates in the second half. The recent easing in oil and other commodity prices and subsequent drop in inflation expectations back the markets’ reassessment of central bank tightening amid all the alarm of a looming recession.

But as far as the Fed is concerned, Powell & Co have signalled that they won’t be altering course unless inflation is on a sure path towards falling to their 2% target. Hence, the June meeting minutes pose an upside risk for the dollar on Wednesday as the Fed will probably reiterate its message that it remains committed to reducing inflation.

Is there more fuel in the dollar rally?

The greenback brushed a 24-year high of 136.99 yen last week but has since eased back a little. Renewed positive momentum would bring the 137-yen handle back within scope, while a successful crack above it would revive market talk of the 140 level being breached, especially if the lift comes from surprisingly strong jobs numbers.

But with investors on edge about a faltering outlook, a smaller-than-expected increase in payrolls could pressure the dollar versus the safe-haven yen, though it may boost it against other riskier currencies. A big jobs miss would likely fuel recession fears, sparking a flight to safety and dragging Treasury yields lower.

Narrowing spreads between US and Japanese government bonds could push the dollar below the recent support of the 161.8% Fibonacci extension of the May downtrend at 134.42 yen, paving the way for the 132-yen level. This would consequently take the pair dangerously close to the 50-day moving average, which lies slightly below the 132 mark.