The Eurozone economy may have notched up impressive growth in the second quarter, but conditions have started to deteriorate rapidly in the third quarter. The flash PMI estimates by S&P Global due on Tuesday will reveal whether business activity improved or slumped in August. Investors will likely be paying particularly close attention to Germany – Europe’s largest economy – as it is the most vulnerable from the energy crunch, which is showing no sign of easing. The euro, meanwhile, is headed for parity versus the US dollar after crashing below its sideways range. From bad to worse

Things just seem to be getting from bad to worse in Europe this year. If the war in Ukraine wasn’t enough to derail the bumpy recovery from the pandemic, the worst drought in 500 years and the real prospect of energy rationing certainly could. Business confidence is plunging amid headwinds from multiple fronts, with stagnating growth in China being the latest.

There has been some relief at least from lower oil prices. As more of the price decline in crude oil gets passed on at the pump, and to a lesser extent, in electricity prices, this should provide a substantial boost for both consumers and businesses. However, Europe’s dependency on natural gas, and specifically, on Russian gas, means the energy crisis on the continent could outlast the surge in oil prices. 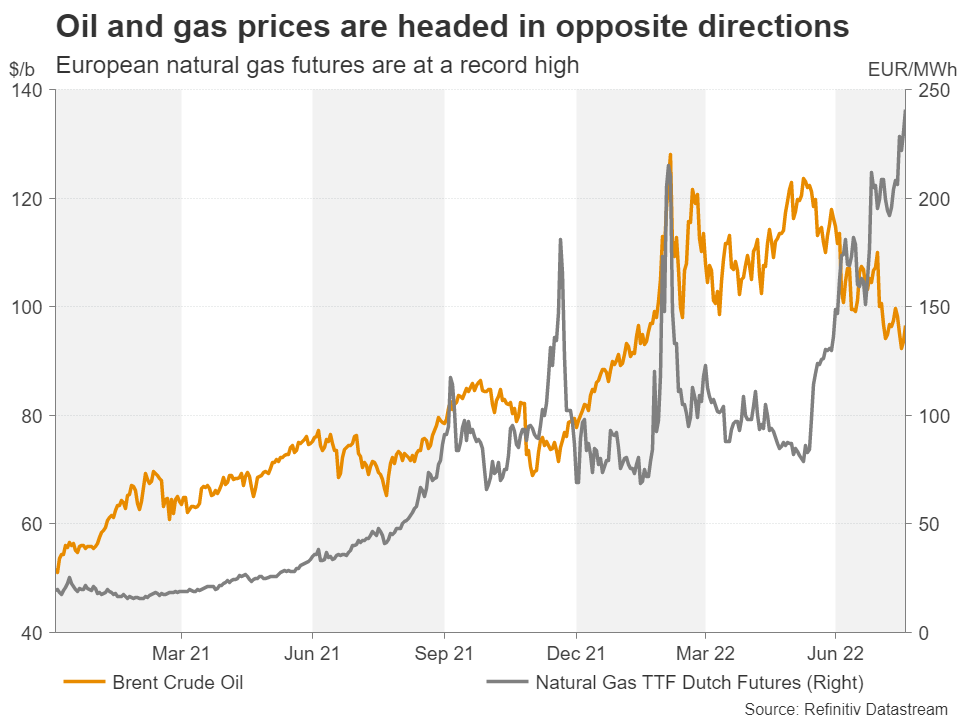 The negative risks have already started to materialize as Eurozone manufacturing activity contracted in July for the first time in two years, while the situation was even worse for Germany, with both the manufacturing and services sectors shrinking last month according to the PMI survey.

August’s flash estimates are unlikely to offer much respite in the run of gloomy headlines. The Eurozone’s flash manufacturing PMI is expected to decline from 49.8 to 49.0, while the services print is forecast to drop from 51.2 to 50.5. This would put the composite PMI at 48.8, signalling the start of a broadening decline in economic activity. 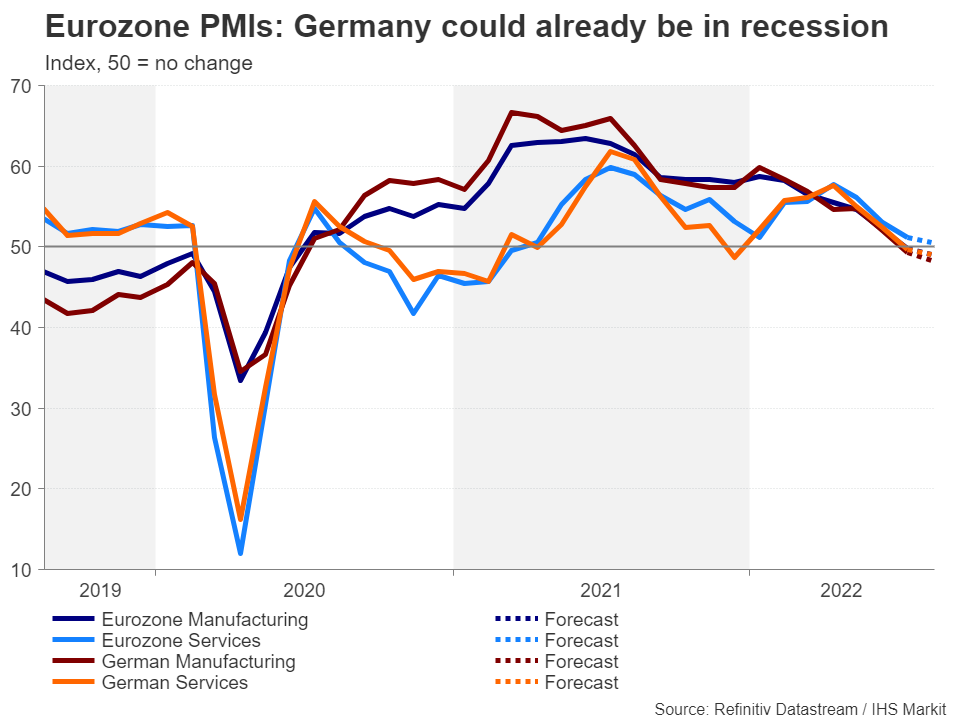 In Germany, the forecasts are notably more dire as the composite PMI is predicted to fall from 48.1 to 47.4, in what could be the beginning of a long and steep contraction.

Within reach of parity

The euro, which had been trapped between the $1.01 and the $1.03 levels for much of July and August, has just dived below this range and is at risk of breaching parity from a poor set of PMI figures. A rerun of July’s 20-year trough of $0.9950 slightly above the 261.8% Fibonacci extension of the June upleg now looks probable.

Alternatively, the euro could rebound towards its 50-day moving average around $1.0275 from any positive surprises in the PMI readings, as long as it can clear the hurdle of the 161.8% Fibonacci just beneath $1.02.

Whether the euro can again bounce off the parity mark will likely depend on the two big variables: what will happen to natural gas prices and supply, and how will the European Central Bank respond to the escalating gas crisis.

Can the ECB halt the euro’s decline?

The ECB’s hawkish tilt in July was pivotal in cementing support in the $1.01 region. Policymakers will probably maintain their pledge to rein in inflation when they meet on September 9. But hawkish soundbites may not be enough this time round.

The chances of tensions between Russia and Europe easing anytime soon are remote. Hence, the coming winter will almost certainly be difficult for countries that rely heavily on natural gas for their electricity needs, regardless of whether Moscow decides to completely cut off supplies, and rationing is looking increasingly unavoidable. A further slowdown in China’s economy would also deepen Europe’s woes, especially for German exporters.

Against such a backdrop, it’s hard to see how a recession can be averted, and more importantly, how the ECB can sound convincingly more hawkish than the Fed and put a floor under the beleaguered euro.