Is Alphabet an attractive play ahead of its Q4 earnings? – Stock Market News

Google parent Alphabet is set to unveil its fourth fiscal quarter earnings results for 2021 on Tuesday, February 1, after Wall Street’s closing bell. The third most valuable publicly traded company in the US is expected to record a solid, double-digit year-over-year growth. Despite depreciating by over 10% so far in 2022, the company’s stock surged by almost 65% during 2021, outperforming the broader market.Alphabet’s story continues to be advertisement

The advertising business is the foundation of Alphabet’s success, accounting for over 81% of the company’s total revenues during the last fiscal quarter. The tech giant’s dominant position in browser and global search engine markets, together with its vast data accumulation capabilities, enables it to provide greater value to its business. Therefore, with digital ads and e-commerce trends expected to pick up, Alphabet is uniquely positioned to keep capturing the lion’s share of the global advertising market.

The Mountain View-based tech giant is actively expanding its advertising services portfolio. The introduction of its new AI-backed Multitask Unifier Model technology back in May is expected to have enhanced search results. This together with the improvement of its Search and Discovery news feed are likely to have driven more traffic on Alphabet’s platforms, benefiting its fourth fiscal quarter performance. 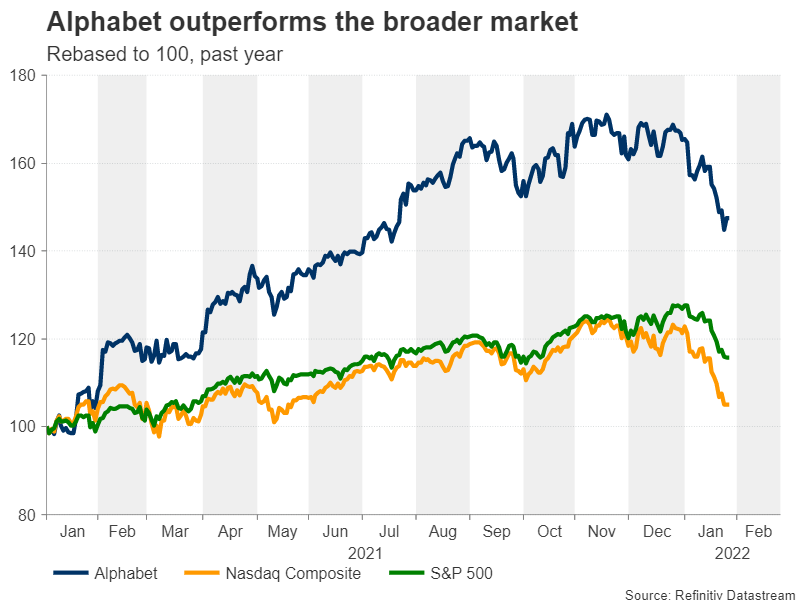 Digitalization trends and cloud adoption have been progressing at a fast pace since the dawn of the pandemic, with the cloud infrastructure market expected to touch $800 billion by 2030, according to Bloomberg. Alphabet is currently investing aggressively in its cloud services portfolio, increasing the number of its data centers to gain a strong foothold in this trending and highly profitable market.

Google Cloud is currently the fastest growing segment of the tech giant. The solid adoption of Google Workspace - a collection of cloud computing, and productivity and collaboration tools - by companies is expected to be reflected on the upcoming earnings release, keeping investors excited about Google Cloud’s long-term prospects.

Augmented reality (AR) is becoming the new battleground for high-tech companies, with Alphabet being a pioneer of AR hardware since 2013 through its Google Glass initiative. Although its earlier attempt turned out to be a failure for the company, it is now charging head-on to address the Metaverse space with its new AR venture project Iris, expected to be launched in 2024. 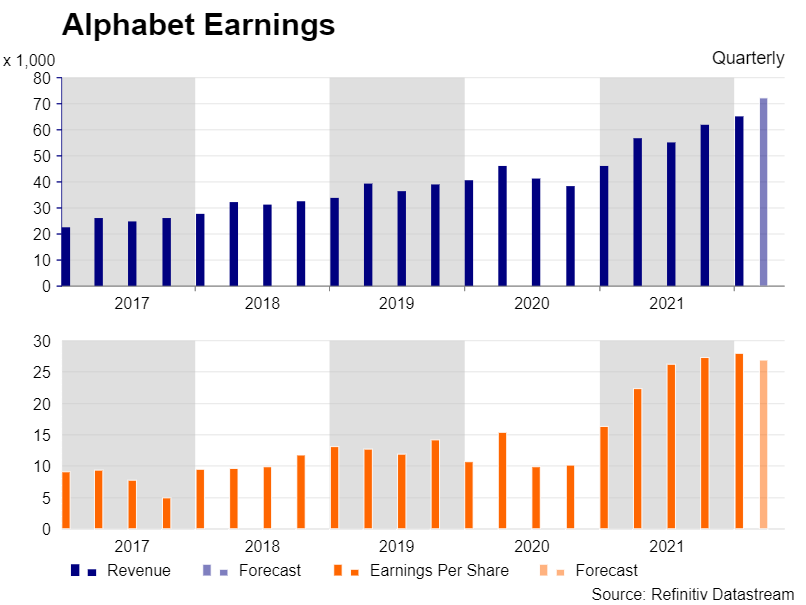 According to Refinitiv estimates, analysts are targeting $72.15 billion in revenue and $26.9 in earnings per share for the fourth quarter, marking a 26.8% and 20.6% year-over-year growth, respectively. Investors will also be anticipating an upbeat note from management regarding the future outlook of the Google Advertising and Google Cloud segment, which are expected to clock a 26.45% and 42% year-over-year growth in revenues, respectively.

Alphabet has been under scrutiny by regulators, especially in Europe, where the company keeps collecting multiple antitrust fines. However, the biggest headache for the Mountain View-based company is the Open App Market Act of the US Congress, which represents one of the most significant efforts by lawmakers so far to constrain the power of big tech companies.

If this act turns into legislation, it will allow developers to promote off-platform discounts, directing customers to their websites for app purchases and membership payments. Therefore, the company's revenue might take a hit as developers could avoid Google Play Store’s payment processing systems and commissions. 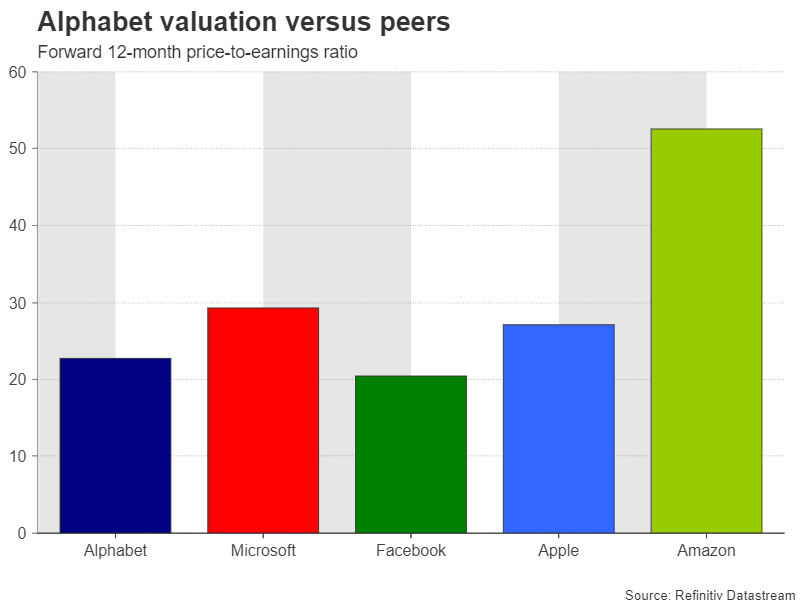 Is Alphabet a long-term play?

Alphabet owns two of the most well-known search engines - Google and YouTube - while its Android software currently holds 72.5% of the global mobile operating system market share. This provides a direct competitive advantage, which allows the company to protect its long-term profits against its peers. Moreover, the third most valuable publicly traded company in the US has consistently managed to increase its revenues and operating income, reflecting the company’s resilient business model.

From a valuation perspective, Alphabet has a forward price to earnings ratio of 22.9, which denotes the dollar amount someone would need to invest to receive back one dollar in annual earnings. The tech giant is trading at a discount compared with most of its competitors, reflecting the company’s ongoing antitrust scrutiny. However, the company has higher total cash and marketable securities than total liabilities, reflecting its strong balance sheet and reinforcing the thesis of a low-risk, long-play stock.

The company is currently trading over 13% below its all-time high as the recent selloff in big tech names attributed to expectations that the Fed will tighten monetary policy has weighed on its stock. Tech bulls are hoping that a strong earnings report could ease some of the recent ‘pain’.

Taking a technical look at its stock, better-than-expected results could push the price towards the region which includes the 2,670 hurdle and the 200-day simple moving average (SMA) before buyers eye the 50-day SMA currently at 2,843. To the downside, should the numbers come out worse-than-expected, the bears might send the price to test the 2,490 obstacle, before shifting their attention towards the 2,397 barrier.

Week Ahead – Nonfarm payrolls on tap, has the dollar topped?