Apple is set to unveil its first fiscal quarter earnings on Thursday, January 27th, after Wall Street’s closing bell. The most valuable publicly traded company is expected to record its largest revenues in history, delivering a solid year-over-year growth. Despite its 2022 share price depreciation of almost 12%, the company’s shares are up by 6% since the last earnings report, outperforming the broader market, which is down by 4% over the same period.Apple’s future looks bright

Augmented reality (AR) and virtual reality (VR) are becoming the new battleground for high-tech companies, with Apple craving to establish itself as a formidable player in both markets. The tech giant has been working swiftly to develop its AR and VR technologies, which could become the next leg of growth for the company. The upcoming products will also require faster and better performing mobile phones, ensuring the robustness of high-priced iPhone sales for the years to come. 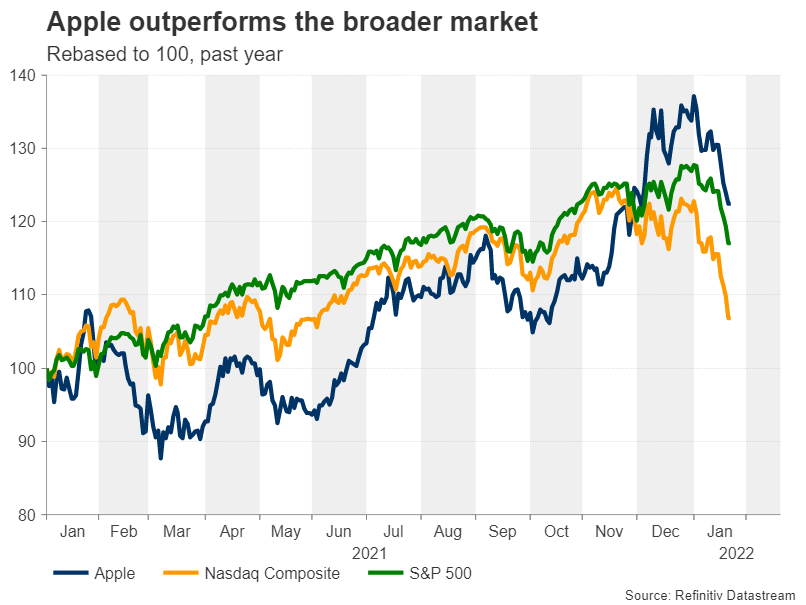 Moreover, the Cupertino-based company is widely anticipated to announce its next generation of iPhone SE 3 during spring. Thanks to its affordable price, its predecessor iPhone SE had gained significant popularity in huge markets like India. An upgraded model could drive future sales, broadening the already enormous base of iPhone users, which will consecutively drive revenues for the company’s high-margin service segment.

During the last earnings call, Apple’s CEO Tim Cook warned investors about the possibility of supply constraints weighing even more on the company’s revenues for the first fiscal quarter ending on December 25th. Evidence to this was the limited supply of the newly released iPhone 13 during the holiday season. However, the lead times for the product have reportedly eased in early December, spreading optimism among investors about a potential revenue beat.

Therefore, considering the easing of supply constraints and the approaching Chinese New Year, which has been historically a good sales period for Apple, an upbeat note from management regarding the near-term prospects of the company is not out of the equation. Potential positive remarks during the upcoming earnings call could drive confidence about Apple’s future outlook, causing an appreciation of the company’s share price. 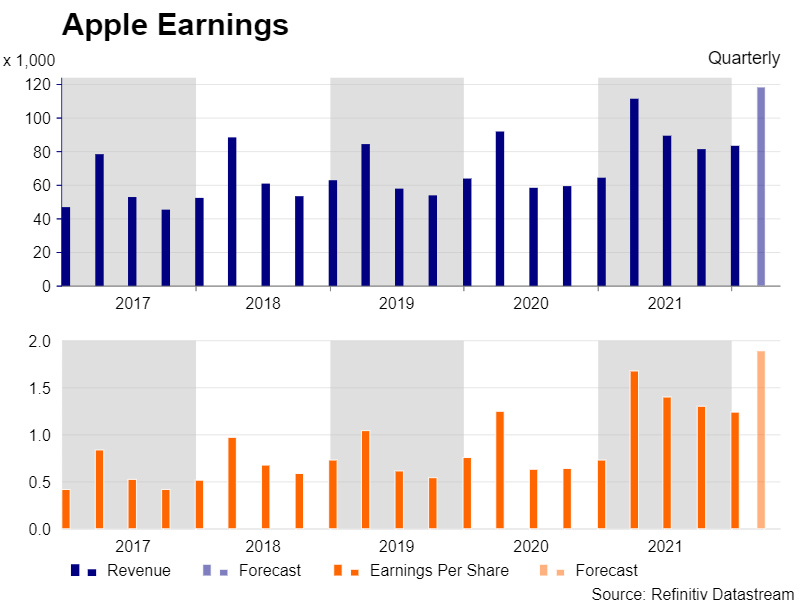 Largest revenues in history on sight

According to Refinitiv estimates, analysts target $118.75 billion revenue and $1.9 in earnings per share (EPS) for the first fiscal quarter, marking a 6.6% and 13% year-over-year growth, respectively. The quarterly report is also expected to show robust growth in revenue across each segment, except for the iPad, which is anticipated to mark a 2.9% decline due to supply constraints.

The Mac segment is also likely to catch investors’ attention, as the report will reflect the sales performance of Apple’s most exciting computer so far. The new 14-inch MacBook Pro which runs on Apple’s latest M1 Pro and M1 Max processors is expected to drive growth, leaving a scope for better-than-expected revenue readings.

The biggest headache for the Cupertino-based giant is the Open App Market Act, which represents one of the most significant efforts by lawmakers so far to constrain the power of big tech companies. If this act turns into a legislation, it will prevent Apple from requiring developers to use its Apple Pay system as a condition for distributing their products within its app store. This could strip the company from its current 15% to 30% commission on every app store purchase made, hurting the high-margin revenues of its service segment. 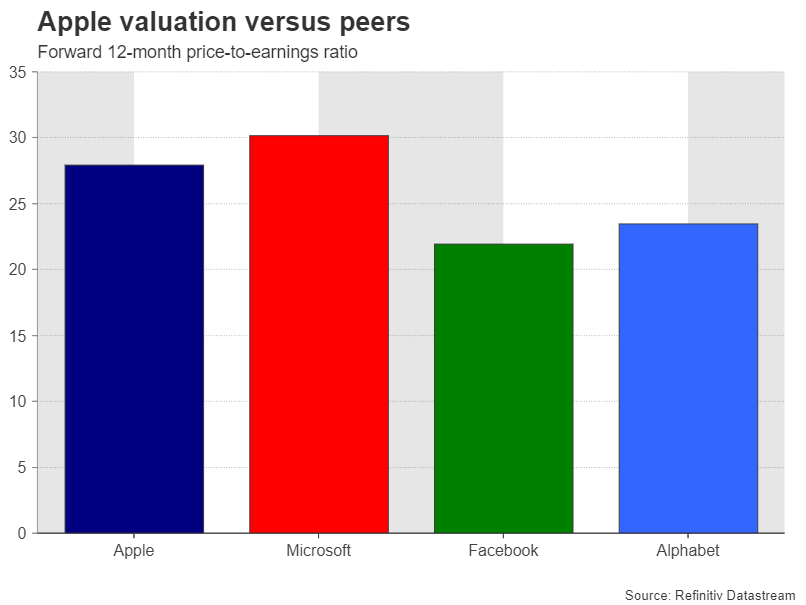 Is the company a long-term play?

The most valuable publicly traded company aims to continue towards its net cash neutral position policy - hold an equal amount of cash and debt on its balance sheet - with excess cash given back to investors as dividends and share repurchases. Through stock repurchases Apple reduces the number of shares outstanding, increasing the EPS even if net income remains constant, benefitting long-term investors.

From a valuation perspective, Apple has a forward price to earnings ratio of 27.6, which denotes the dollar amount someone would need to invest to receive back one dollar in annual earnings. The tech giant appears to be trading at a premium compared with most of its peers, reflecting Apple’s resilient business model.

The company is currently trading 12% below its all-time high as the recent selloff in big tech names attributed to rising yields and expectations that the Fed will tighten its monetary policy has weighed on its stock. Tech bulls are hoping that a strong earnings report could alleviate some of the recent ‘pain’.

Taking a technical look at its stock, better-than-expected results could push the price towards the region, which includes the 50-day simple moving average (SMA) and the 160 hurdle before buyers shift their attention to the 177 resistance. To the downside, should the numbers come out worse-than-expected, the bears might send the price to test its 157 obstacle, before eyeing the 150 barrier.