The Reserve Bank of Australia will announce its latest policy decision on Tuesday at 4:30 GMT and is widely anticipated to announce significant changes to its quantitative easing measures. The changes have the potential to be both positive and negative for the Australian dollar as the RBA will likely acknowledge that it may have to raise interest rates slightly sooner than expected but that its asset purchases could run for longer than its main peers’. But with the aussie being on a slippery slope lately, the stakes are high should the RBA lean more notably than expected in a particular direction.Will RBA join the great exit?

The Bank of Canada became the first central bank earlier this year to announce it is scaling back its pandemic stimulus measures. The Bank of England and Reserve Bank of New Zealand have taken baby steps in that direction. Will the RBA be next? Probably, but the RBA’s more unusual policy mix will allow it to continue sounding more dovish than the rest.

There are two key policy quandaries that the Australian central bank needs to resolve at its July meeting. The first is about its yield curve control policy. The RBA is currently targeting the three-year yield on Australian government bonds (AGB) maturing in April 2024. Policymakers need to decide whether to extend this to bonds maturing in November 2024. Should they decide not to roll over to November 2024, this would send a clear signal to the markets that the RBA is sticking to its expectations that it will likely hit its inflation target sometime in 2024 and is open to the possibility of hiking rates before April 2024. 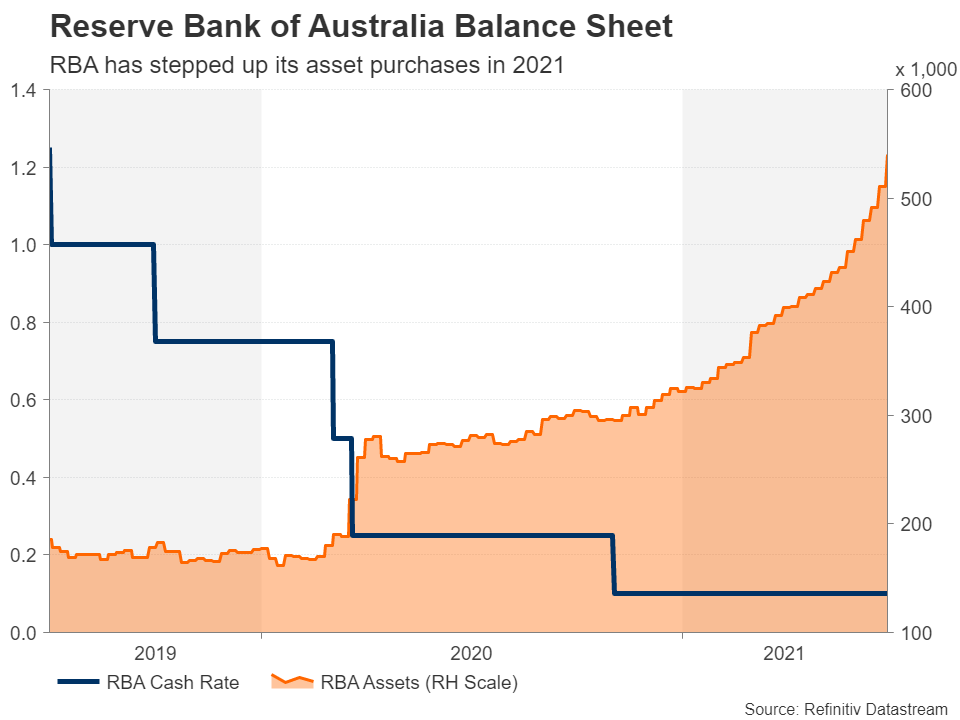 The other quandary for the RBA is how its bond purchase program will be extended. The current round of A$100 billion in AGB purchases is due to be completed in September. The Bank could announce a third round, but speculation is running high that policymakers will opt for open-ended QE, setting a weekly pace of A$5 billion and reviewing it periodically so that it can be adjusted based on the speed of the recovery. Such a move would be seen as the RBA being committed to its QE program for the long haul. At the same time, policymakers would have the flexibility to slow bond purchases incrementally depending on how quickly the economy fully heals from the virus crisis.

Low not high inflation is the RBA’s problem

The one policy tool that is certain to remain unchanged at the July meeting is the cash rate, which has stood at a record low of 0.1% since November 2020. The RBA will also likely reiterate its pledge to get inflation sustainably back within its 2-3% target band and it sees wage growth accelerating to 3% being contingent to achieving this. Both CPI and the wage price index are currently running well below desired levels so even if the RBA takes tentative steps for an eventual exit from all the stimulus, it would have plenty of ground to stay very dovish in the short- to-medium term. 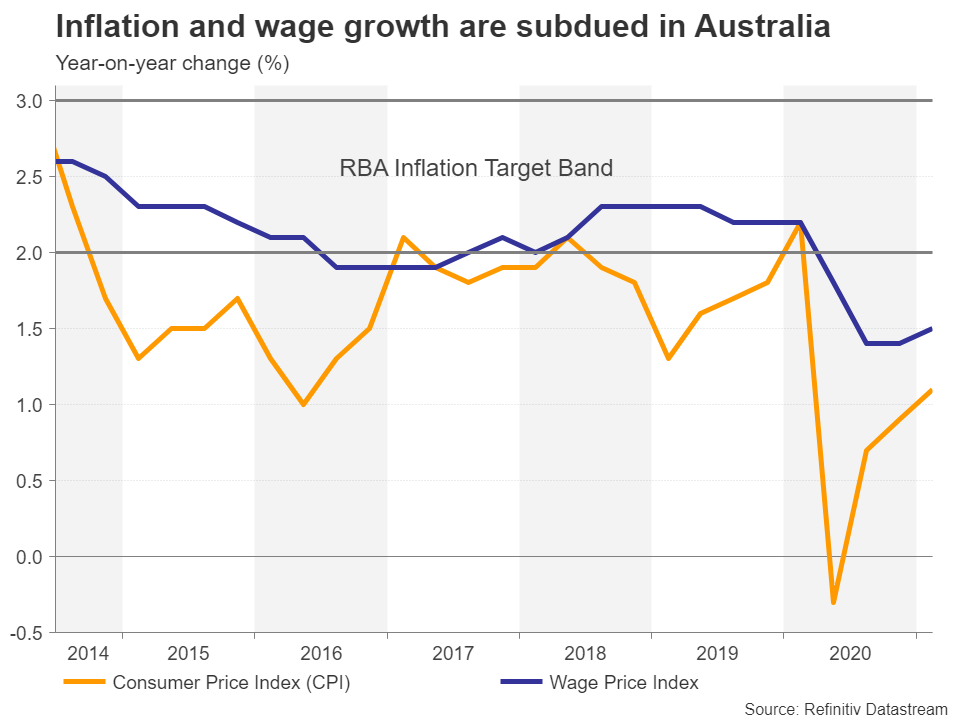 More crucially, the RBA could still turn out to be one of the more dovish central banks, perhaps even more the Fed, only to be out-doved by the European Central Bank and the Bank of Japan. Hence, investors will be paying close attention to Governor Philip Lowe’s press briefing after the meeting at 06:00 GMT for any additional clues on how near or far policymakers are to reducing the pace of QE.

Lowe will probably have a tough time explaining where things stand with the Australian economy as GDP has fully rebounded and employment is rising with many businesses reporting labour shortages, but inflation remains low and the outlook is still uncertain. Australia is currently in the grip of a major outbreak of the Delta Covid variant, which has plunged half the nation’s population into a lockdown.

With vaccinations yet to catch up with world leaders like the UK and US, Australia is especially at risk of being hit with its worst virus wave yet, potentially causing significant economic disruption. 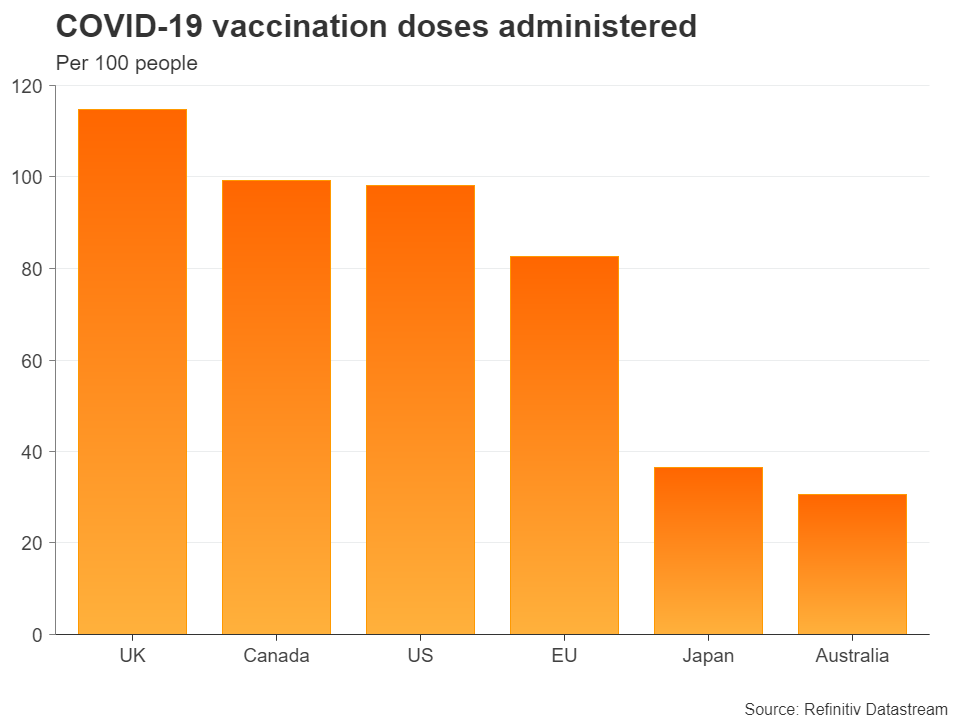 RBA meeting a symmetric risk for the aussie?

If Lowe errs on the side of caution, emphasizing the downside risks more than the impressive progress achieved, the aussie could come under renewed selling pressure against the US dollar, pushing the pair down to the 61.8% Fibonacci retracement of the November-February uptrend at $0.7378. A breach of the 61.8% Fibo would shift aussie/dollar’s outlook to bearish.

However, if the RBA hints that the bond buying days are numbered and Lowe is somewhat more upbeat than anticipated, the oversold aussie would be poised for a bounce back. The 200-day moving average (MA) at $0.7570 would be the first major test on the upside in such a scenario, though a climb above the 38.2% Fibo of $0.7619 is needed for a more solid rebound.

Week Ahead – German elections, China woes, and tons of data