The Bank of Canada (BoC) was the first central bank to slowly sail away from its super accommodative policy settings in late April, citing the rapid improvement in fundamentals and the brighter economic outlook in the years ahead. While investors are eagerly waiting to see what the next card of the tightening process could be, policymakers will likely postpone any adjustments when they publish their new policy review on Wednesday at 14:00 GMT, providing little room for improvement for the loonie.BoC is faster than the Fed

Although both the Fed and the BoC agree that the factors behind the inflation spike will soon resolve, the latter is more transparent as regards its inflation target, aiming to hold interest rates at the effective lower bound until price growth rises sustainably above the 2.0% midpoint of its target range. On the other hand, the Fed has not defined a clear ceiling for its inflation goal, saying instead that it will allow inflation to rise beyond 2.0% for some time before raising rates.Of note, Canada has absorbed a larger share of its lost jobs than the US has, and the BoC believes that it could achieve its price objective in the second half of 2022, earlier than the Fed’s 2024 timeline. Hence, the BoC is reasonably feeling more confident to wind down its bond purchases.

In April, the BoC cut its weekly bond purchases to C$3 billion from C$4bln previously. While such an action was widely expected, the Bank caught investors by surprise when it signalled that it could begin raising its key interest rate from the current floor of 0.25% in the second half of next year, with the 10-year bond yield and the Canadian dollar drifting higher in the aftermath. 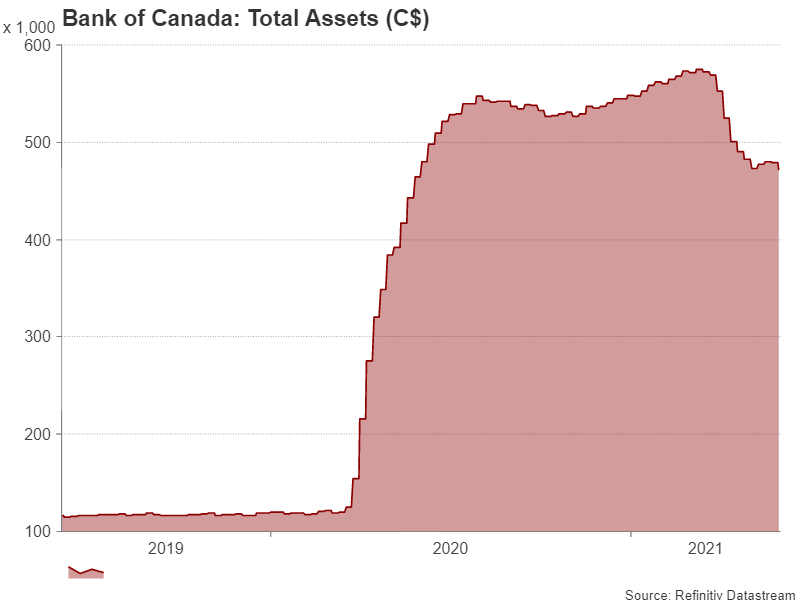 The policy turn emerged as the Bank revised its growth estimates above January’s forecasts in light of the strong resilience the economy showed in the first quarter, as well as in the face of the vaccination progress, and the improvement in the global recovery. The recent snap containment measures, however, have resulted in fresh job losses in April and May, pushing the unemployment rate marginally higher to 8.2%, while declines in consumption were also evident, suggesting that GDP growth may have slowed pace in the second quarter.

Apparently, no country is out of the woods yet, and the latest setback in economic data could discourage the Bank from extending its tapering plans this month. Aside from that, the rally in the loonie is somewhat offsetting domestic upside inflation pressures for now. Hence, the Bank could find little reasoning to move forward with its tightening plans this week.

Nevertheless, the economy has proved to be quite fast in bouncing back from prior covid waves, and remarkably, the share of population receiving a first dose of vaccine in Canada has recently surpassed the US’s, although in terms of full inoculation the economy is still lagging behind. Adding to the tailwinds is Prime Minister Trudeau’s big-tent debt-financed fiscal plan, the booming housing market (which have sent residential investments as a share of GDP to the highest since 1961), and strengthening energy prices, which further bolster optimism that despite the hiccups, the economy could resume its upward trajectory in the second half of this year.

When will the next round of tapering happen?

The next question that arises at this point is when the next tapering announcement will be. Six of the biggest Canadian banks expect the BoC to cut its bond purchases to C$2 billion, or less, as soon as July, while October’s meeting could be another potential date. In two weeks, May’s inflation readings could come under the spotlight following the surge to a decade high of 3.4% y/y in April, while business and consumer surveys will also be updated in the coming weeks, providing a better view on the second quarter. Hence, if the figures point to a robust recovery in Q2, the odds for bond tapering in July could strengthen.

As regards the market reaction, the policy meeting is expected to be uneventful. Therefore, the loonie bulls could get little impetus unless the Bank points to July’s gathering for the next round of tapering in which case, dollar/loonie could stretch its long-term downtrend towards the key support area of 1.1920 -1.1800, last seen in 2015.

Alternatively, if the BoC chief signals that more time is needed to confirm a sustainable recovery this year before engaging in more tapering practices, the pair could  jump to meet the 50-day SMA and the tough long-term resistance trendline both seen within the 1.2300 - 1.2400 zone.

View All
XM Research - 21 hours ago