The Bank of Canada is about to announce another rate hike on December 7. The market expects a 25bps rate increase despite the upside surprise in the Q3 GDP and the tight labour market. Chances of a bigger rate hike appear slim, but such an announcement could have a sizable impact on the loonie.BoC defied market pricing at the October meeting

The BoC holds its eighth and final interest rate setting meeting for 2022, a week ahead of the Fed and ECB meetings on December 14 and 15, respectively. The rate decision will be announced at 15:00 GMT with the press conference by Governor Macklem coming at 16:00 GMT.

In October, the BoC defied market pricing that it was leaning towards a 75bps move and hiked by 50bps, taking the overnight rate to 3.75% - the highest level since 2008. Both the interest rate statement and Macklem’s comments at the press conference were hawkish, keeping the door open for further (potentially sizeable) hikes. However, the Canadian dollar was spooked from the projections that the economy could stall over the next few quarters, raising concerns over potentially similar economic comments from other central banks.

Since the October meeting, data releases have been on the positive side. GDP growth surprised on the upside in the third quarter with 2.9% quarter-on-quarter annualized rate, while the latest inflation print showed signs of stabilization at arguably very elevated levels. Meanwhile, labour market data came in stronger than anticipated for October, but the September retail sales painted a bleaker picture. 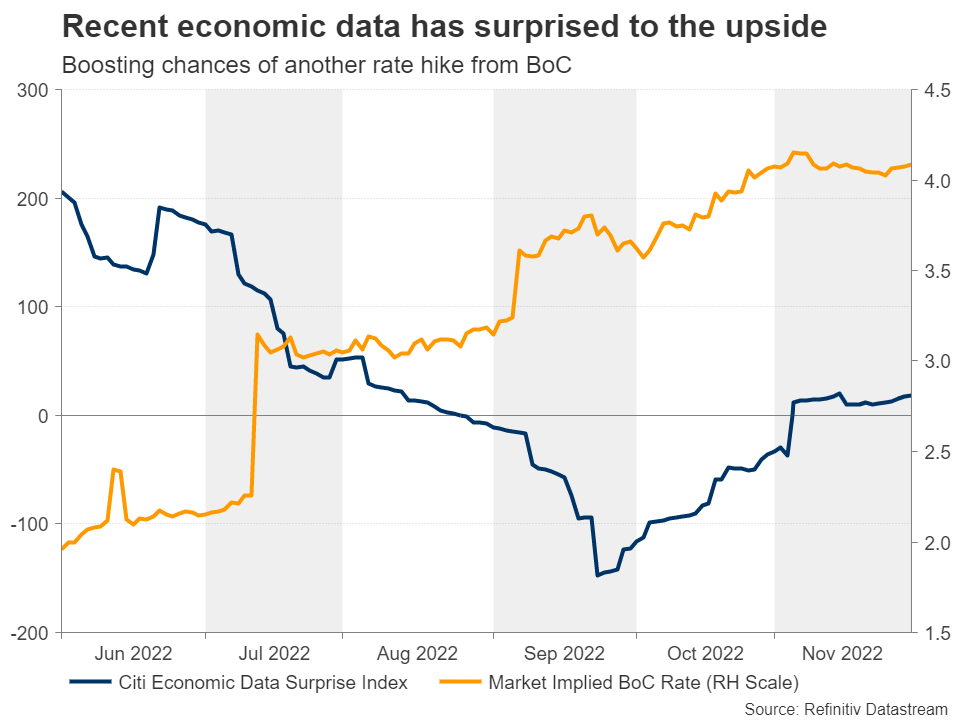 Similarly, the top two BoC officials, Governor Macklem and Senior Deputy Governor Rogers, have been on the wires reiterating their hawkish intentions. While the market appears convinced that another rate hike will be announced, the focus has been on the size of future hikes and the terminal rate. Macklem has been outspoken about getting closer to the end of the hiking cycle, but it clearly depends on the inflation trajectory and the moves from the other major central banks, especially the Fed.

Following the November 30 speech by Fed Chairman Powell, and particularly his signal for less aggressive rate hikes going forward, the market pricing is leaning towards a 25bps rate hike to 4%. A significant probability, currently above 80%, is attached to such an outcome, with the rest pointing towards a bigger 50bps move. A 25bps move could send a strong message that the BoC is closing in on its terminal overnight rate.  The immediate impact on dollar/loonie is unlikely to be massive, but as the market digests the announcement and its possible implications on other central banks, the reaction could be more sizeable.

A more sizable rate hike, for example 50bps, coupled with a stronger hawkish commentary at the press conference would open the door for appreciation of the loonie against the dollar. Loonie bulls would eye the 38.2% Fibonacci retracement level of the April 5 – October 13 uptrend of 1.3375, and eventually the 100-day simple moving average at 1.3295. If loonie bears take the reins, the 1.3605, which is the 23.6% Fibonacci level, should be the first resistance level, followed by the 1.38 area. 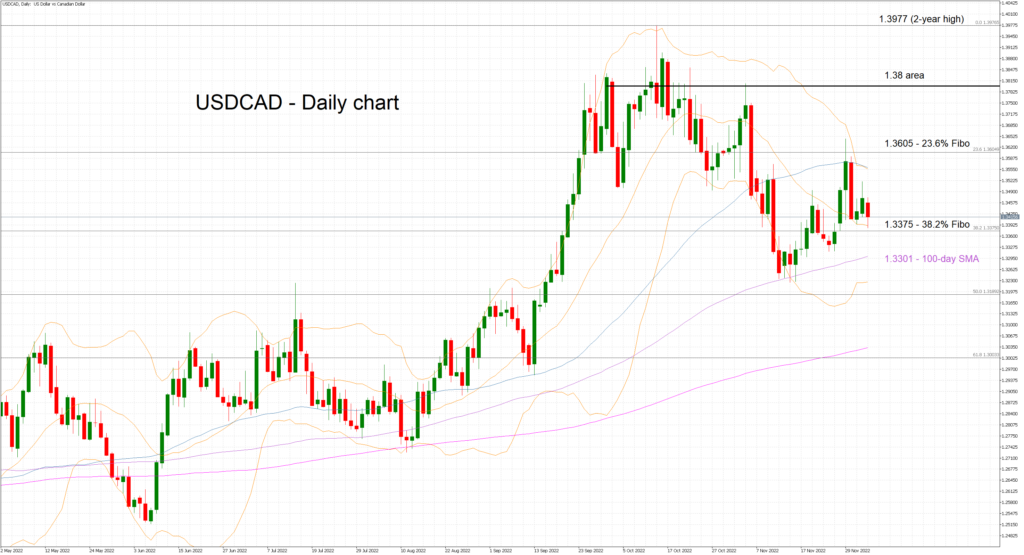