The Canadian economy is expected to have added more jobs in July as the phased easing of the lockdown across the country continues to boost employment. The jobs report, due on Friday at 12:30 GMT, could give the Canadian dollar a further helping hand in erasing its year-to-date losses versus the tumbling greenback. But with troubles brewing across the border in the United States, can Canada’s recovery stand on its own two feet?Jobs bounce set to continue

It’s so far so good for Canada’s climb out of its worst recession on record, with both employment and consumption bouncing back after the lockdown restrictions began to be slowly lifted in May. GDP rebounded by 4.5% month-on-month in May, following the historic 11.7% plunge in April, and the more forward-looking Ivey PMI indicator is expected to show on Friday that economic activity maintained its expansion in July.

A sustained recovery in the jobs market is essential for consumption to return to pre-pandemic levels so Friday’s data will be a key barometer for policymakers at the government and at the Bank of Canada.

After a gain of almost one million in June, a further 400,000 jobs are expected to have been restored in July. That would still leave 1.3 million Canadians who lost their jobs from COVID-19 out of work, but it would nevertheless be a step in the right direction. The unemployment rate is forecast to have declined to 11.0% in July, having peaked at 13.7% in May. In another healthy sign, the labour force participation rate is projected to have risen to 64.4% as the reopening of the economy encourages more people to return to work or seek employment. 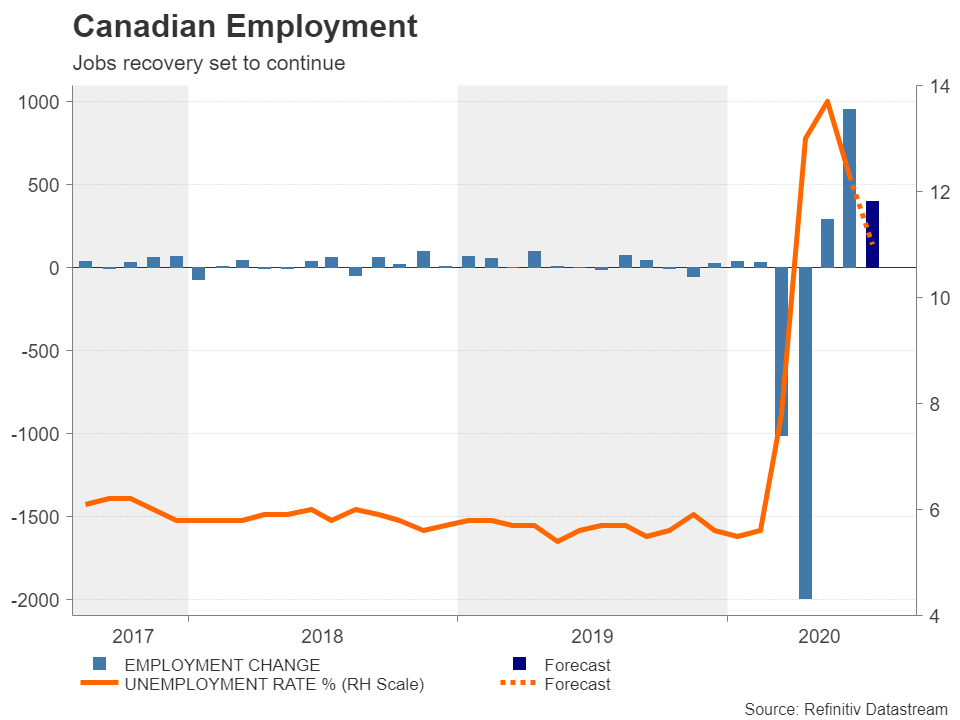 Data to play second fiddle to sliding US dollar

An upbeat set of jobs numbers could add more fuel to the loonie’s recent bull run, potentially pushing dollar/loonie below a major chart barrier at 1.32. A break below this support would open the door for the December 2019 trough of 1.2947.

In the event that the employment data disappoint and investors begin to question Canada’s road to recovery, dollar/loonie could pull back from 5-month lows and rebound towards the 1.3475 congestion zone. A sharper unwinding of the loonie’s latest gains would bring the key 1.37 level back into scope.

However, with dollar weakness being the primary driver of the loonie’s appreciation, underwhelming jobs figures are likely to spark only a knee-jerk jump in dollar/loonie. That’s not to say that there aren’t any potential risks on the horizon for the Canadian dollar, but these would probably only slow the pair’s descent rather than halt it.

One major risk for Canada’s recovery is the end of the government’s wage subsidy scheme at the end of December. The programme covers 75% of employee wages for businesses that have been impacted by the pandemic, in a bid to prevent massive layoffs. However, as in other countries that have launched similar furlough schemes, they are proving costly and are conditioned on a full reopening of the economy, which is unlikely to happen until the second half of 2021 at the earliest by most estimates. This implies governments are only delaying the inevitable and without a vaccine soon, unemployment will shoot up when these programmes end. 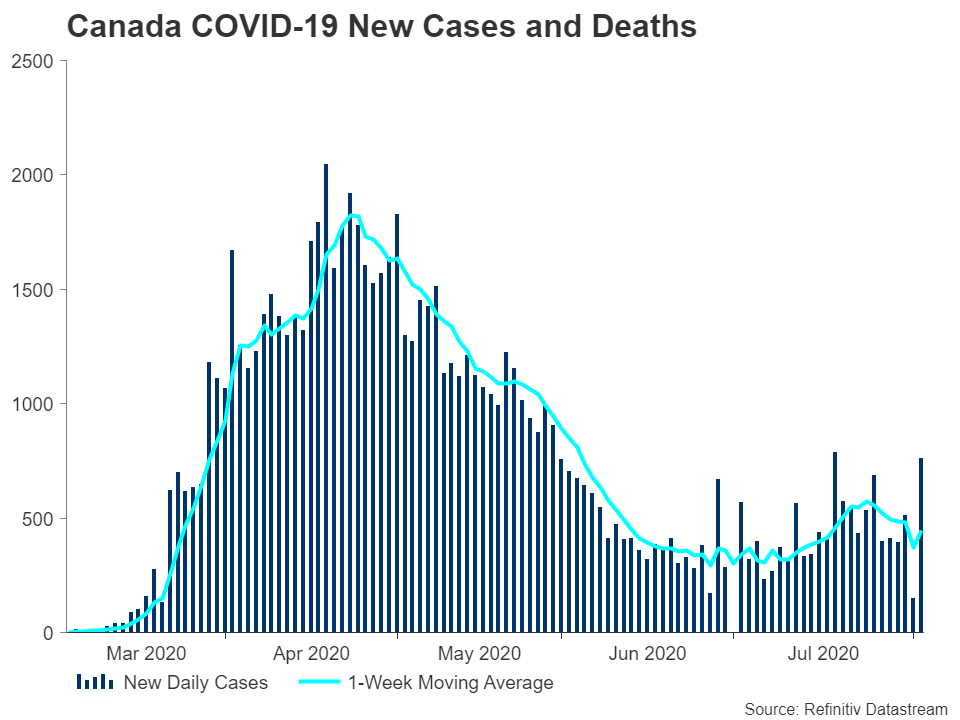 A second virus wave is another threat for the economy. Canada has already seen a small uptick in new infections in recent weeks and further flare-ups are possible heading into winter. Even if Canada can successfully fend off a second wave, the resurgence in many other places, particularly in its closest trading partner, the United States, is bound to weigh on growth, especially if demand for oil – the country’s biggest export – is affected too.

Any deterioration in the Canadian outlook would probably catch up with the loonie at some point. For now, though, it’s all about the US dollar.

To continue reading this article in full, log in to your Members Area