The European Central Bank will wrap up its meeting at 11:45 GMT Thursday and President Lagarde will have a tricky communications exercise on her hands. She will have to admit the economy is doing better, but sounding too optimistic could add more fuel to the euro's undesirable rally. Overall, a lot of good news is priced in here and the longer-term risks seem tilted towards a lower euro/dollar as the ECB/Fed policy divergence becomes clearer.One eye on the euro

The ECB chief will have to fly somewhere between a hawk and a dove when she takes questions from journalists on Thursday. The economic outlook has turned much brighter lately thanks to widespread vaccinations across Europe, but over-emphasizing the positives would risk propelling the euro even higher, something the ECB wants to avoid.

A stronger exchange rate can dampen both inflation and economic growth, by pushing down on the prices of imported products and by making exports less competitive abroad. The ECB is well aware of this and will not want to add any more fuel to the fire, considering that the trade-weighted euro is already near historical highs. 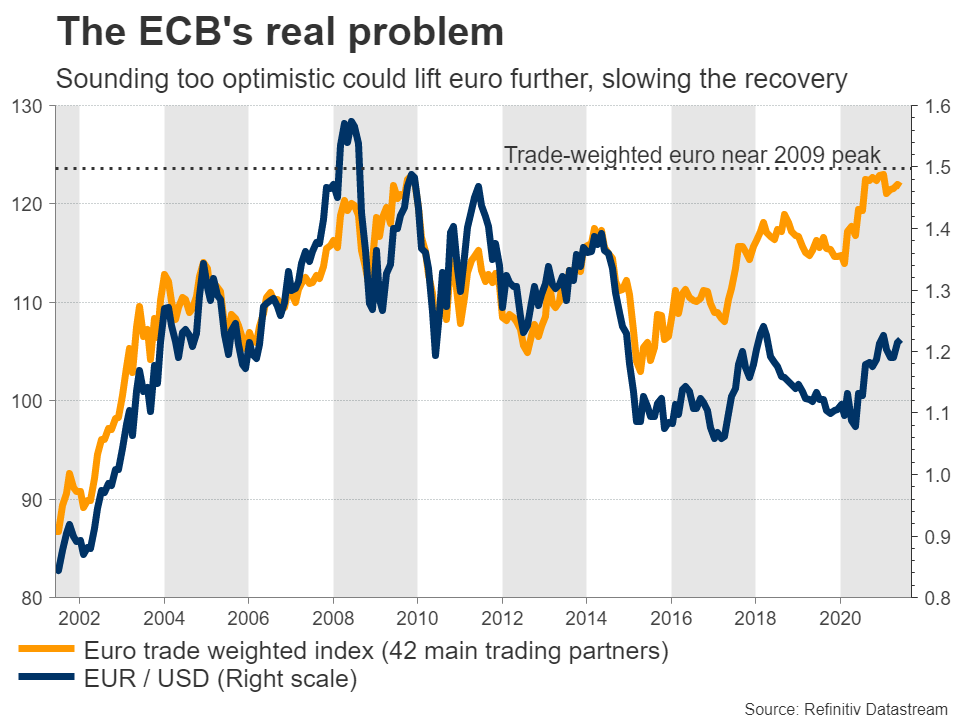 Beyond what Lagarde says, the focus will be on any changes in the pace of pandemic-era QE purchases and the updated economic forecasts. With growth firing up and bond markets calmer, the ECB might slow down the pace of its purchases slightly, while keeping the total QE envelope unchanged.

Hence, a minor change in the speed but not the size of its QE program could happen, which is unlikely to shock financial markets.

The euro area is currently in the middle of its 'grand reopening' as vaccinations have reached a point where things can start going back to normal. This momentum has spilled over into both economic data and the euro itself.

On the opposite side of this equation, the dollar remains fragile thanks to real US yields being depressed. With US inflation heating up but the Fed still unwilling to discuss an exit plan from cheap money policies, real yields - meaning nominal yields minus inflation - have dropped back near record lows. That has annihilated the dollar's rate advantage. 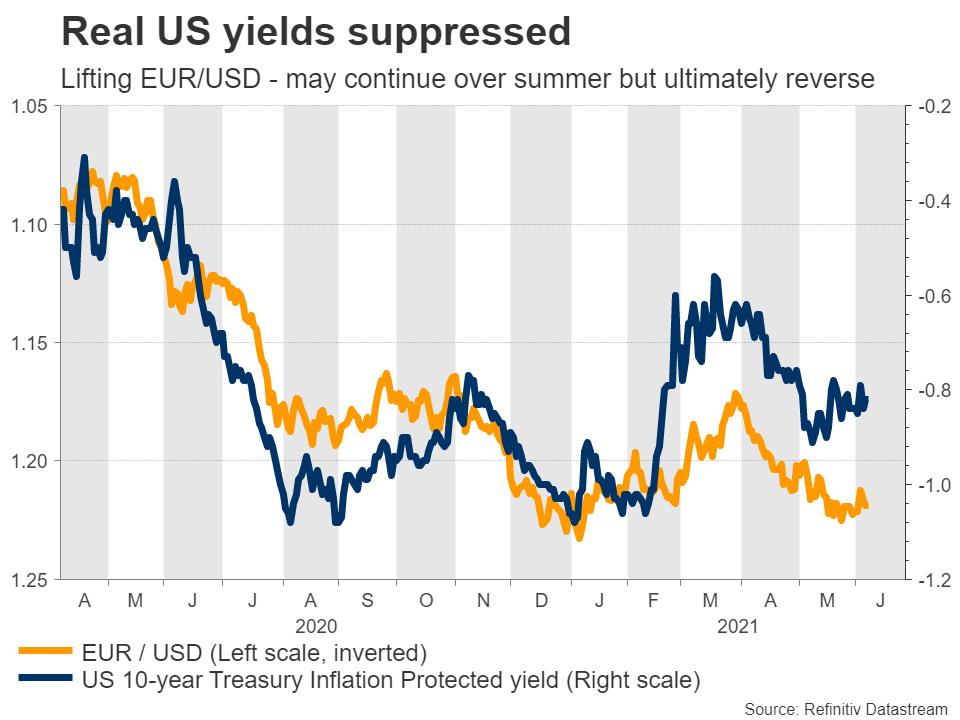 This dynamic will likely continue to play out for now as the European reopening kicks into top gear, but it could change dramatically by the late summer or autumn. Simply put, the ECB is several months - if not years - behind the Fed in the normalization game.

American authorities have just unleashed another monster spending package, and more is on the way. In contrast, the European Recovery Fund money is still stuck in the bureaucratic labyrinth, and it wasn't that impressive to begin with. Economies like Italy will need much more to sustain growth once the reopening momentum fades.

Indeed, some senior Fed officials have already opened the door for a tapering discussion to begin "at the coming meetings". This implies that by September, markets might be buzzing about a Fed taper being imminent, whereas the ECB will be nowhere close. That's a classic recipe of monetary policy divergence, which points to longer-term downside for euro/dollar.

The main risk to this view would be if US economic data massively underperform going forward, pouring cold water on expectations for a Fed tapering announcement this year.

Taking a technical look at euro/dollar, a potential pullback could encounter initial support around the recent low of 1.2100. A downside violation could open the door for a more fortified region around 1.1990, which also encapsulates the 200-day moving average.

On the upside, if buyers manage to overcome the recent high of 1.2265, then the focus would turn towards the December peak of 1.2350. Even higher, the highs of April 2018 around 1.2410 could provide resistance.

View All
XM Research - 20 hours ago