With Germany beginning a weeks- or months- long bargaining process of forming a three-party coalition after Sunday’s election resulted in a marginal victory for the left-centre SPD, the euro will shift its focus back to the economic calendar this week and particularly to the September CPI inflation figures due on Friday at 09:00 GMT. The data are expected to notch a 13-year high, flagging that the worst of inflation has not passed yet, but unless the news raises hawkish voices within the ECB, any reaction in the euro could be less powerful.The lady is not tapering despite hot inflation

Although the excuse of transient inflation dominates central bankers’ views worldwide, the tenacious pickup in price measures is definitely making policymakers sweat ahead of the winter season.

With the headline Consumer Price Index advancing surprisingly above 2.0% to a decade high of 3.0% y/y in August, the ECB had one more reason on top of its brighter forecasts for the eurozone economy to cut the pace of its monthly pandemic-led PEPP asset purchases during this month’s policy meeting, with analysts estimating a slowdown to 60-70 billion euros in the next three months from 80bln previously.

The ECB, however, is not scaling back its 1.85trl euros envelope according to Ms. Lagarde but recalibrating the March increase in bond buying, which is a divergence from the Fed’s bond tapering plans. Also, unlike the Fed, the central bank is not foreseeing any rate hikes at least before 2023, while some analysts have lifted the timeline further into the next decade.

Hence, the ECB is not expected to play catch-up for some years to come, which overall could be negative for the euro, but the reduction in PEPP purchases is a sign that policymakers are favouring a less stimulative policy. The main question now is how long the ECB will remain patient if inflation continues to overshoot its 2021 projection of 2.2%, and more importantly, if there will be any tweaks in the traditional APP asset purchases early in 2022 after the PEPP scheme expires in March. 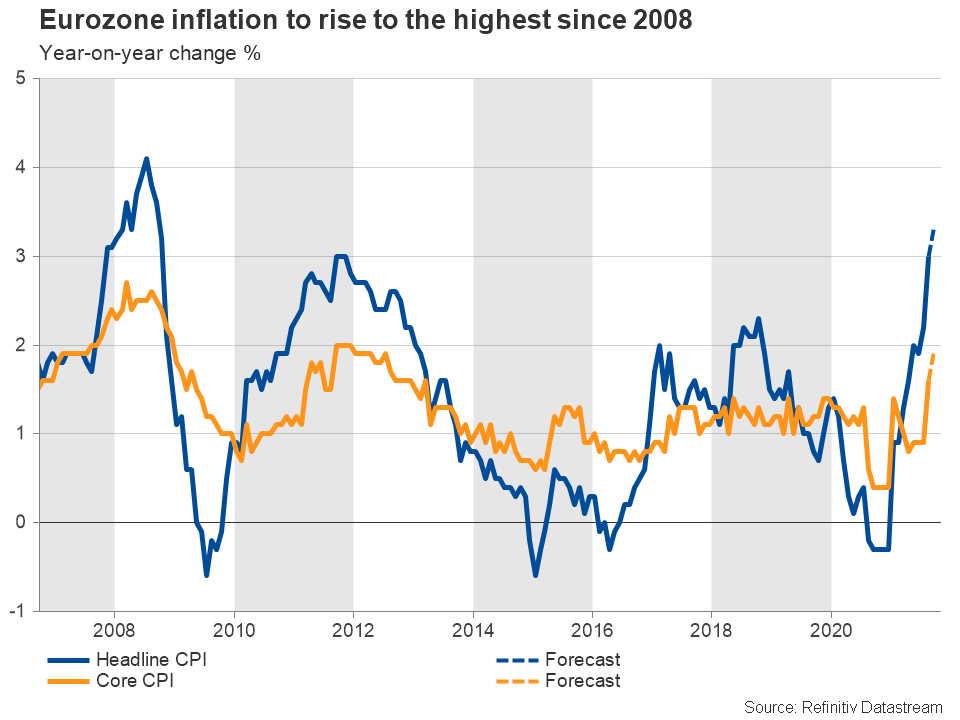 Given the boost in shipping costs and the spiral in commodity and energy prices, another increase in CPI figures would not be very surprising as inflation expectations continued to soar in the eurozone this month.

Yet, a stronger-than-expected outcome may see ECB hawks bringing the case for a termination to the PEPP program before the March expiration date back on the table, while also expressing scepticism about the flexibility of boosting the pre-Covid APP program once the PEPP scheme is phased out, as the Governing council member Madis Muller and ECB member Peter Kažimír said recently. 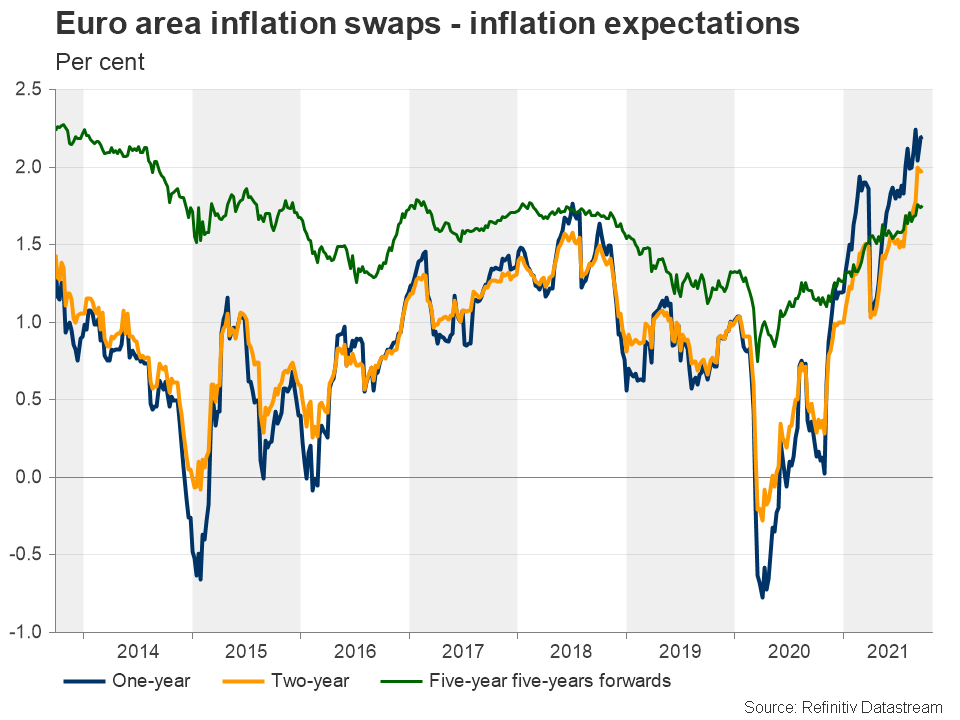 As for the euro, another unexpected pickup in CPI readings could bode well for the common currency as investors are sensitive to any inflation updates these days, especially if the stats induce some hawkish comments from ECB policymakers thereafter. Such an event could put the brakes on the one-month decline in euro/dollar near the 1.1663 low and push the pair up to last week’s high of 1.1755, avoiding an outlook deterioration. Thenn, a close above 1.1800 would then open the door for the crucial 1.1908 resistance zone.

Otherwise, if September’s inflation eases back below 3.0%, justifying the ECB’s policy strategy, euro/dollar could crack the 1.1663 floor, extending May’s downtrend towards the 2020 support area of 1.1620, while deeper, 1.1576 may attract special attention as this is where the 200-weekly simple moving average is laying.