Inflation in the euro area is expected to hit the highest in more than a year when the flash estimate for March is published on Wednesday (10:00 GMT). Fears of higher inflation have gripped bond markets lately, pushing yields higher and causing undue tightening of financial conditions for Eurozone economies. However, even though inflation may accelerate further in the coming months, the rise is expected to be temporary. Moreover, any revival in price pressures is at risk of being choked off by a sluggish recovery, as Europe has not only fallen behind the race to vaccinate its population, but it is now battling a third wave of the coronavirus. It’s no wonder, therefore, that the euro is languishing at 4½-month lows versus dollar, as the US economic outlook keeps brightening in comparison.  Inflation is creeping higher

After five months of negative prints, the Eurozone’s harmonised index of consumer prices (HICP) jumped to 0.9% year-on-year in January, holding steady in February. HICP is forecast to have risen further in March, to hit a 14-month high of 1.3% y/y, mainly due to the base effect from the drop in inflation a year ago when European economies were shut down and oil prices tanked.

However, underlying measures of inflation are not anticipated to tick higher. Excluding food and energy items, HICP is expected to stay unchanged at 1.2% y/y, while the index that excludes alcohol and tobacco as well is forecast to remain at 1.1%. The European Central Bank pays close attention to the two core rates when trying to predict whether any trend in the headline rate is sustainable or not. 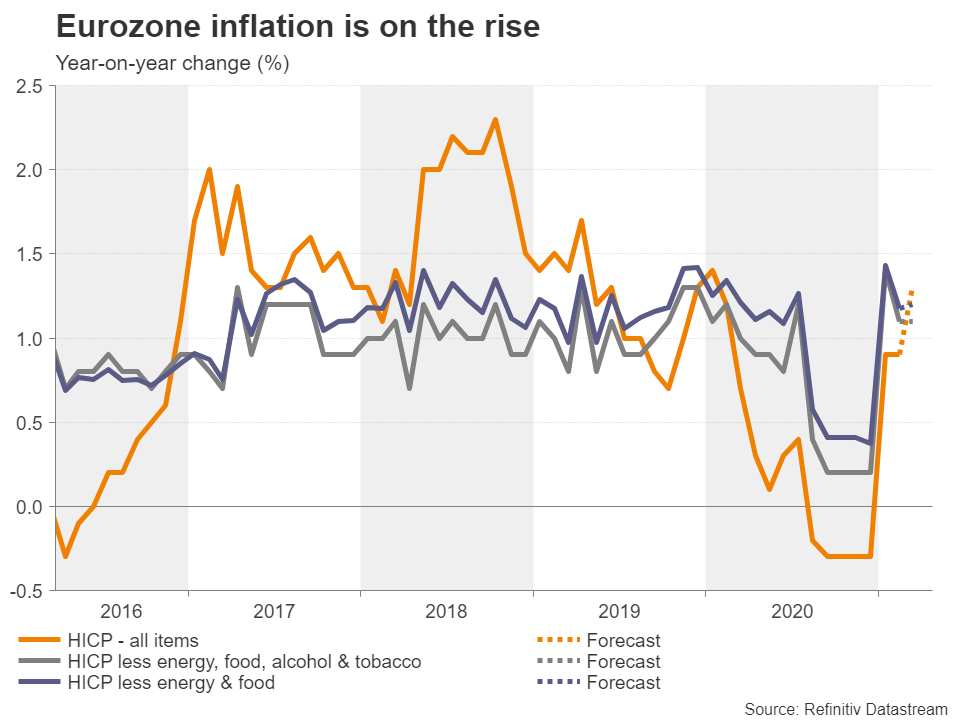 Will the inflation spike be temporary?

After nearly a year of soaring energy prices and supply chain disruptions that are almost certain to feed into higher consumer prices, the headline rate of inflation will probably continue rising in the coming months. Inflationary pressures could become even more pronounced once businesses such as those in the hospitality, travel and leisure sectors mark up their prices as soon as they are able to reopen their doors.

However, once the low base effect of 2020 wears off and the price increases from the oil rally and supply-side shocks fade, whether the upward pressure on prices persists will probably depend on the strength of demand. As things stand, consumption in the Eurozone is not expected to enjoy as strong a rebound as in the United States, where the virus relief packages approved far eclipse Europe’s in size (the EU hasn’t even started distributing last year’s €750 billion recovery fund).

A slow rollout of COVID-19 vaccines in the European Union was already threatening to delay a full reopening in member states. But a re-escalation of virus cases in many countries that has been dubbed as the ‘third wave’ could force tight restrictions to stay in place at least until early summer, hampering the recovery further.

If the expected comeback in consumption isn’t powerful enough to sustain the price increases and to additionally generate some wage growth, the jump in inflation will not only be temporary but the risk of deflation may even return. Europe’s nascent recovery is one reason why the ECB has responded differently to the Fed to the surge in government bond yields, pledging to step up its asset purchases from April in a bid to prevent a sharp rise in long-term borrowing costs in the euro area.

However, while the move suggests policymakers are not worried about permanent inflation, they may need to clarify their policy in the coming months, specifically, on what their tolerance threshold is for allowing inflation to overshoot the Bank’s target of “close to but below 2%”. This may be a conversation the ECB may not be too comfortable to have but might soon find itself in the tricky situation of having to explain its stance to the markets should inflation continue to edge higher.

Euro on a slippery slope

In the meantime, the euro remains stuck near 4½-month lows against the US dollar, finding support at the 38.2% Fibonacci retracement of the September 2020-January 2021 uptrend at $1.1758. A weaker-than-expected inflation reading on Wednesday could further add to the view that the ECB will begin to withdraw its stimulus long after the Fed, weighing on the pair.

The single currency could then slip below the 38.2% Fibonacci and head towards the 23.6% Fibonacci at $1.1699. Losing the $1.17 handle would open the door for a major test of the $1.16 support region, which was successfully defended back in September and November.