Flash PMI numbers for the Eurozone will likely attract a lot of attention on Tuesday when they’re released at 09:00 GMT as the euro gets savaged in the currency markets. Expectations that the European Central Bank will lag other central banks in normalizing monetary policy remains the primary cause of the euro’s pain. But fresh concerns about the Eurozone economy have made investors even more nervous about the outlook lately. Can the PMI data bring some relief to the beleaguered euro?Almost there

The Eurozone economy has made good progress towards a full recovery from the pandemic this year, with GDP expected to recoup the lost output by the end of this year. Whilst the impact of widespread supply shortages and soaring energy prices is clearly being felt across the continent, particularly in Germany’s vast auto industry, nobody is forecasting a recession, at least not yet. 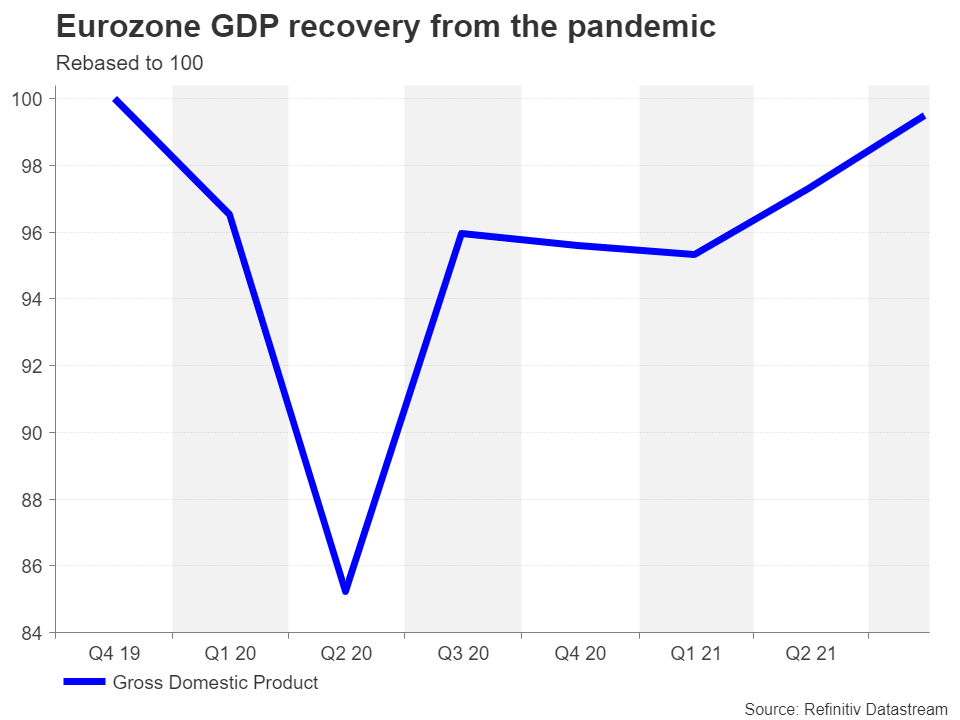 The closely watched PMI indicators by IHS Markit have been steadily heading lower in recent months but remain comfortably above the 50 level that separates growth from expansion. The downward trend likely continued in November as the supply constraints and energy crisis have yet to subside, while the re-imposition of some virus curbs in several EU states probably also dragged on growth. 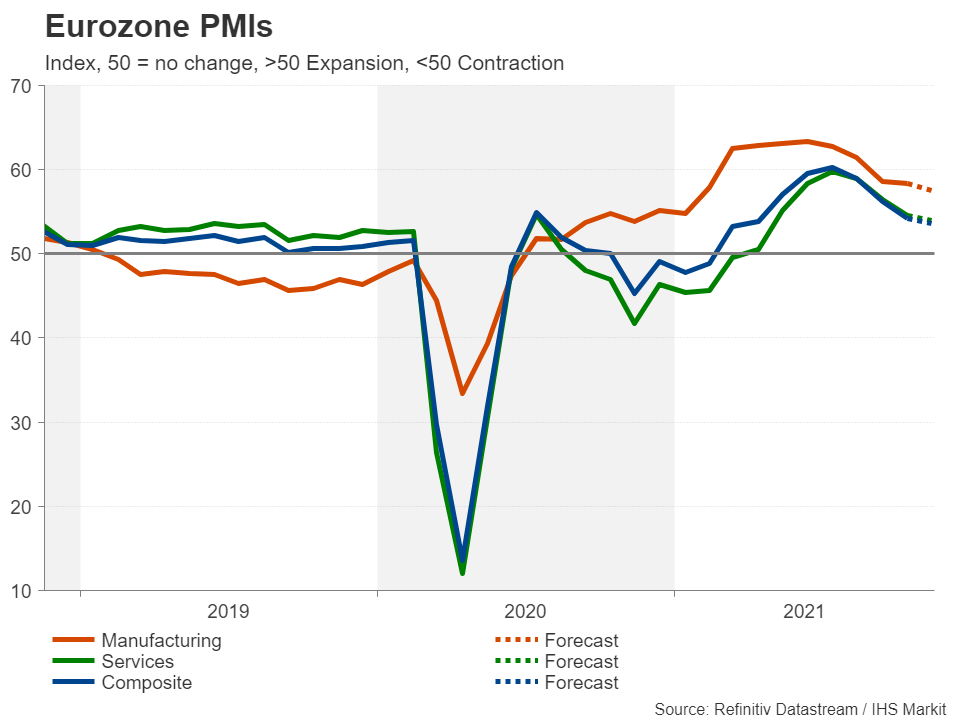 Should the PMI numbers fall by more than expected in November, the euro could resume its downfall as it would heighten worries about a deep economic slowdown in Europe.

How much lower can the euro go?

Euro/dollar found support near the 61.8% Fibonacci retracement of the March 2020-January 2021 uptrend when it hit a 16-month low of $1.1262 on Wednesday. Further losses could see the pair sliding towards $1.1160, which has acted as both support and resistance in the past. If this level is breached as well, the 78.6% Fibonacci of $1.1002 would likely become the next target for the bears.

But in the event of positive surprises in the PMI data, the euro could get onto a more solid footing to climb towards the 50% Fibonacci of $1.1492 before reaching for the 50-day moving average, currently at $1.1600.

Investors are increasingly downbeat about the growth outlook in 2022 as there are several risks on the horizon. Apart from the supply-chain bottlenecks and the associated jump in the prices of raw materials, virus cases are rising, leading some countries like Austria to announce a nationwide lockdown. Furthermore, flagging growth in China poses an additional problem for Europe’s export-dependent manufacturers.

But all this doesn’t justify why the euro has depreciated so much over the past week. A better explanation is that the recent events have only reinforced expectations that the European Central Bank will likely only manage to beat the Bank of Japan among the big central banks when it comes to raising rates in a post-pandemic world.

Although inflation in the euro area is surging – the headline figure hit 4.1% in October, it is rising even faster in the United States. Not only that, but the US economy is in a much stronger position comparatively to withstand rate hikes than the Eurozone’s. This means that the ECB can afford to be a lot more patient than the Federal Reserve in waiting for some of the transitory factors to fade before deciding whether it should raise rates to control inflation.

Nevertheless, money markets are still pricing in a substantial probability of a 10-bps rate hike in 2022 so it may be too soon to become overly bearish about the euro. The single currency’s main drawback right now is that the Eurozone economy isn’t shining as brightly, and the ECB is more relaxed about inflation than its peers. But all that could change in the coming months, especially if high inflation proves to be stickier than anticipated.