As Europe’s vaccine drama unfolds, the flash March PMI prints for the euro area may generate some positive headlines for the region’s struggling economy on Wednesday (09:00 GMT). The easing of certain lockdown restrictions in some countries probably led to an improvement in Eurozone services and overall activity in March. Though, with several countries tightening their virus curbs lately, the outlook remains murky, hence, investors are focusing their attention on the European Union’s vaccine progress, which is seen as the only permanent way out of lockdowns. The euro has been on the backfoot after the European Central Bank’s push back against rising yields so any gains from slightly brighter PMI data are likely to be limited.An increasingly uneven recovery

The narrative of an uneven recovery couldn’t be truer than in the Eurozone where the manufacturing sector has been roaring ahead while the endless lockdowns have scuppered the recovery in services. As European nations go in and out of lockdowns, the services sector is expected to have continued contracting in March, but at a smaller rate. Analysts are forecasting the services PMI rose from 45.7 to 46.0 in the flash reading. 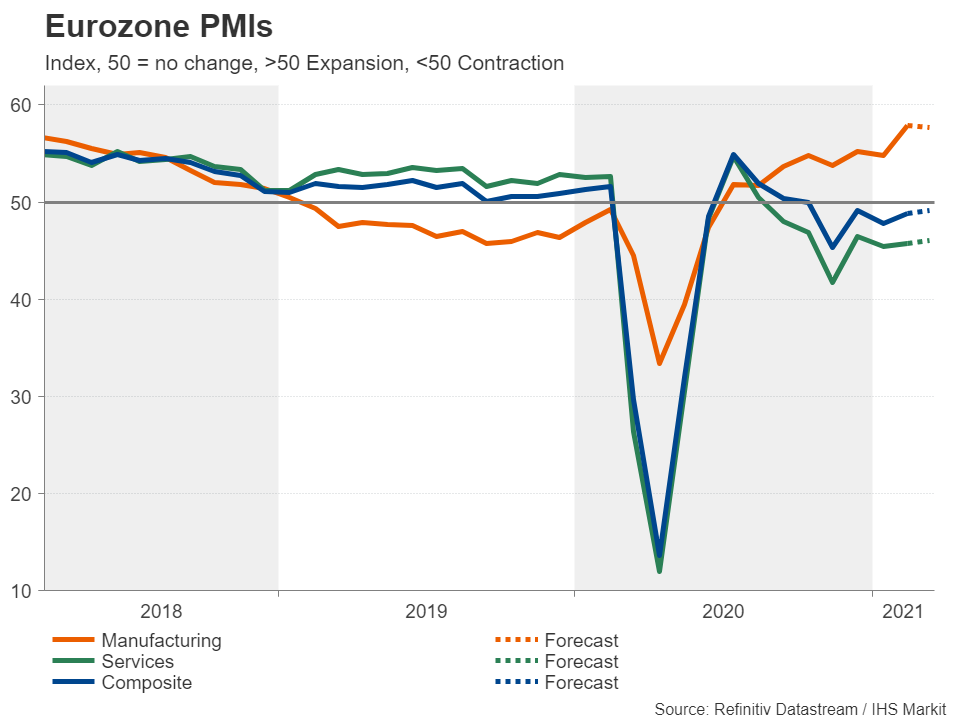 But as the economic recovery globally gathers pace and trade rebounds, manufacturers likely enjoyed another month of healthy export demand in March. The manufacturing PMI is expected to have held comfortably above the 50-expansion level, albeit moderating a little to 57.7.

As a full reopening of the economy becomes increasingly dependent on the success of the vaccine rollouts, the latest PMI numbers are not anticipated to spark anything more than a knee-jerk reaction in forex markets. The euro is currently hovering above its 200-day moving average (MA) against the US dollar, having failed several times to overcome resistance in the $1.1980 area.

Better-than-expected PMI figures on Wednesday could help shove the pair above this barrier, paving the way for a test of the 20-day MA just under the $1.20 level. Higher up, the 123.6% Fibonacci extension of the September-October 2020 downtrend at $1.2108 could become the next major resistance to watch.

US economy set to outpace Europe’s

The euro’s medium-term outlook has been blighted by a number of factors in recent weeks, meaning its negative correction against the dollar isn’t likely to come to a quick end. The EU’s shambolic management of the bloc’s vaccination programme has dealt a serious blow to the Eurozone’s recovery efforts. Virus cases are surging again in the continent’s three biggest economies – Germany, France and Italy – with authorities either reimposing lockdowns or delaying the lifting of restrictions. 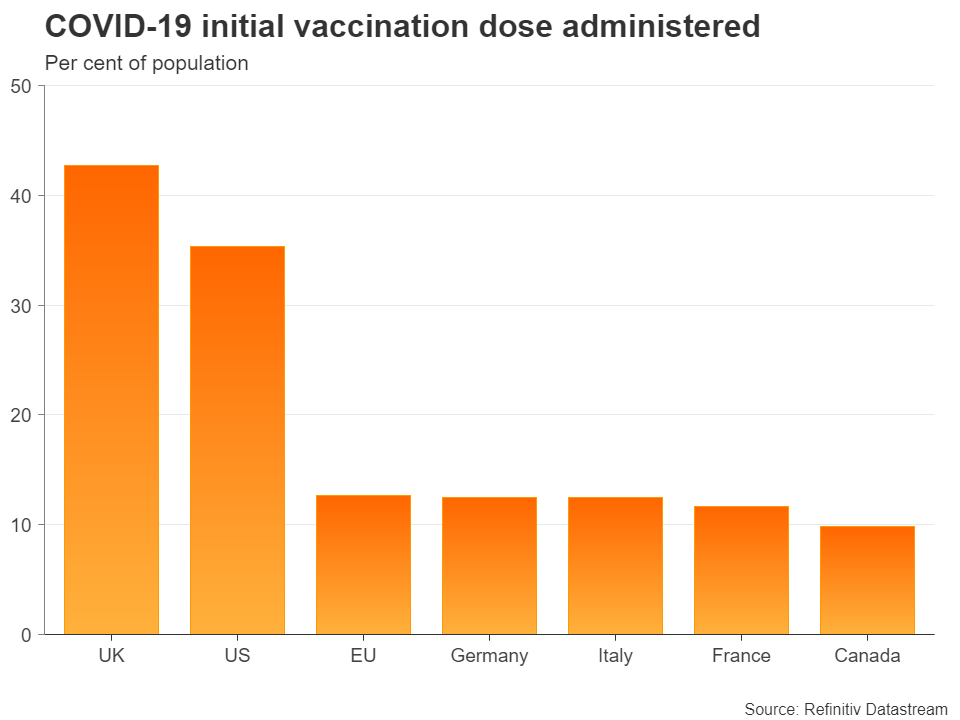 In contrast, not only is the United States injecting more stimulus into its economy, but its vaccination campaign is accelerating, paving the way for a consumption boom when businesses safely reopen in the second half of the year. With everything pointing to a lagging and bumpy recovery in the euro area, Eurozone yields have not risen as much as US Treasury yields during the global bond rout. In fact, Eurozone yields have been on the retreat in March as doubts about Europe’s recovery plan have intensified and the European Central Bank has stepped up its purchases of local government bonds, widening the spread with soaring US yields.

If it starts to look like there won’t be a significant relaxation of virus rules before the summer, the euro will probably continue to lose appeal and the only potential game-changer at this point is if the EU were able to get its act together on the vaccination front.