What distinguishes the Fed from other key central banks is its confidence over bond tapering. On Wednesday at 18:00 GMT, the Fed is widely expected to announce that its bond program, which massively expanded its balance sheet over the past two years to fight the economic shock from the pandemic, has done its job. The news, however, is already well telegraphed; therefore, the policy statement itself may not affect the dollar. However, a bulk of questions on inflation and future rate hikes will probably put Powell in the corner during his press conference, likely jolting the dollar if his comments provide fresh direction.Time for bond tapering

After months of guessing, markets will finally see the Fed pressing the taper switch to start reducing the pace of its bond purchases on Wednesday even though nonfarm payrolls have not been as descent in the past two months as policymakers wished and analysts anticipated.

Minutes from the September meeting clarified that the $120 billion monthly buying would slow gradually, starting with a $10bln cut a month in Treasuries and a $5bln reduction a month in mortgage-backed securities in mid-November or mid-December, with the program estimated to close by mid-2022.

Policymakers based that scenario under assumptions that the economic recovery will remain broadly on track but disappointingly, recent GDP growth figures for Q3 displayed the weakest expansion since the recovery started.

Nevertheless, investors saw the glass half full once again as the lion's share of the slowdown was attributed to a temporary contraction in auto sales and to chip shortages, while encouragingly the survey also showed that consumer spending continued to underpin the recovery. What’s more notable is that compensations in the private sector outpaced the rising inflationary pressures, remaining slightly above the pre-pandemic trend. Hence, the negative surprise in GDP data and the worrying growth signals coming from the flattening of the yield curve could do little to postpone the bond tapering decision this week, especially as inflation continues to run hot. 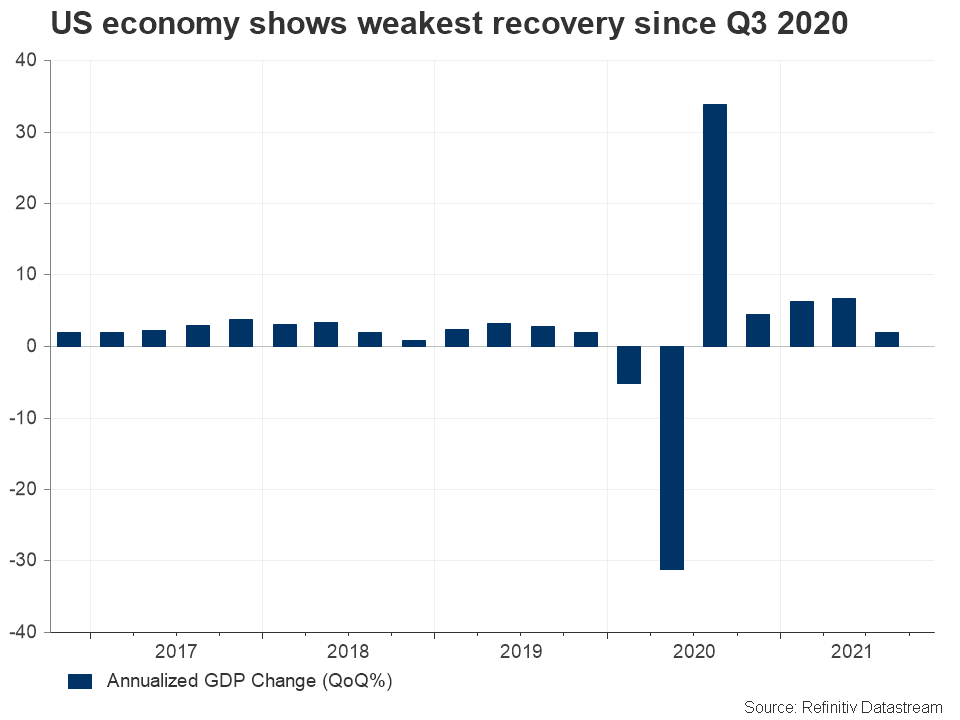 Rate expectations to come under examination

Besides, comments from Fed speakers have already got the message out that a diminishing bond buying program in the coming months is not a secret anymore. Hence, what remains to be seen now, and perhaps could be the next key market mover for the US dollar, is when and how the transition to higher interest rates will happen. The central bank will not update its rate projections this month, therefore investors will seek any language twists around inflation and pay close attention to Powell’s press conference to detect any pushbacks in the transitory narrative and hence any changes in the rate outlook.

Despite global central banks sticking to an anti-inflation mode, traders are growing confident that the Fed will raise its benchmark interest rate twice by 0.25 bps each time by the end of next year, once during the summer and later at the end of 2022. Apparently, there is a good explanation for that. 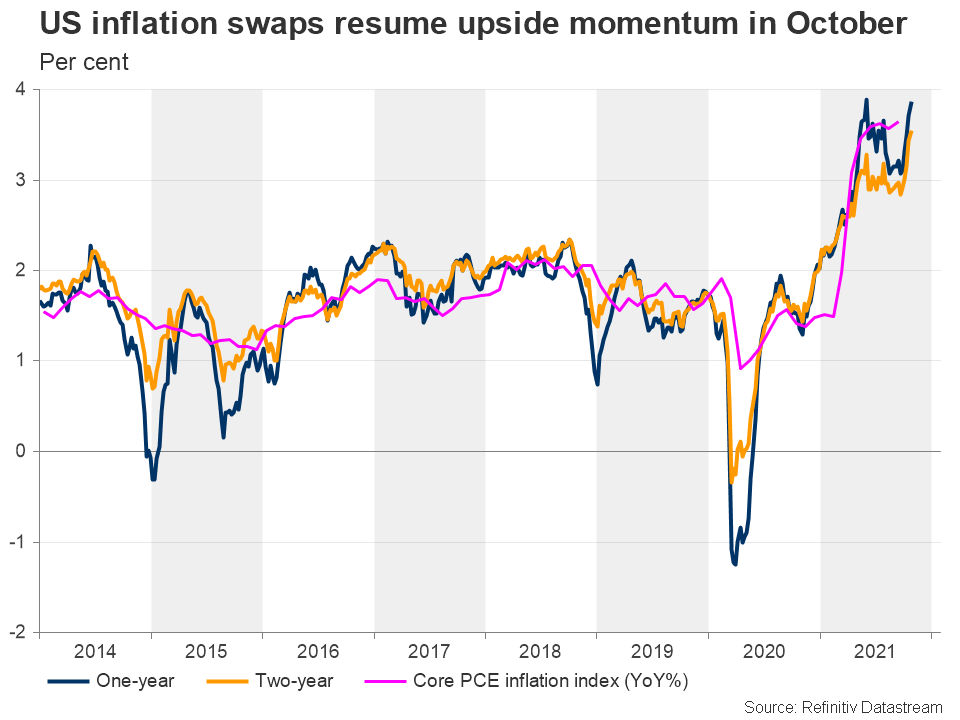 Secondly, the battle with the pandemic hasn’t been won yet, meaning imbalances between limited global supply of goods and services and an unprecedented demand may keep underpinning input and wage costs in the coming months, resulting in higher consumer prices. Therefore, what remains to be seen during this week’s policy meeting is whether the Fed will seriously recognize that inflation is carrying durable risks for the economy, opening the window for interest rate rises next year or at least not playing down the market pricing of rate hikes as the ECB chief Christine Lagarde did. The other option would be to announce a steeper cut in bond purchases, but that would be a softer tightening alternative and hence would have a smaller impact on the US dollar. 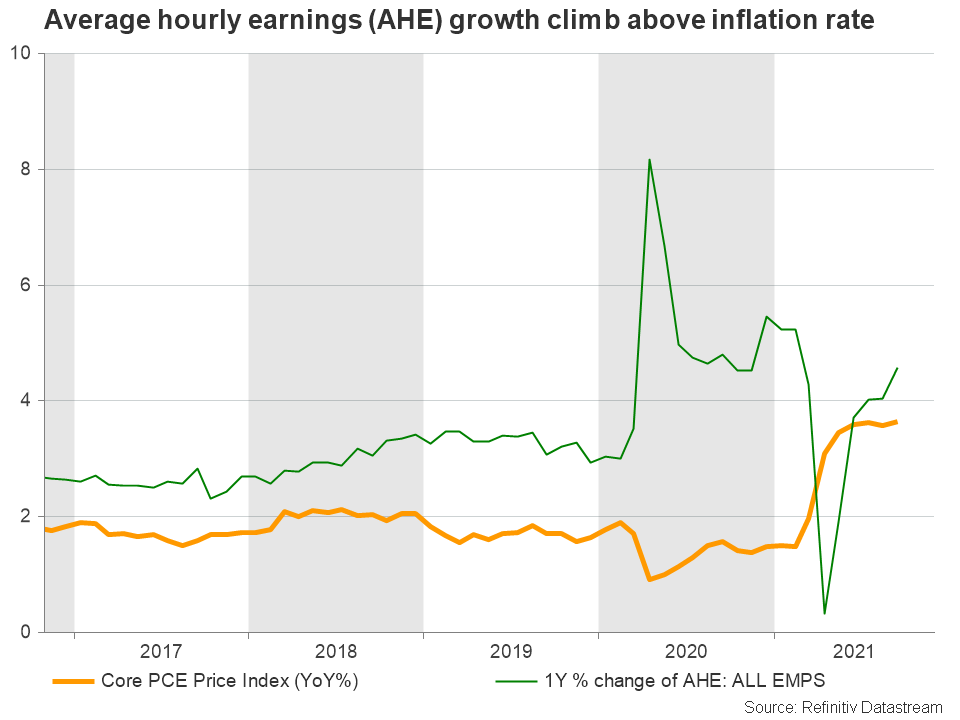 From a technical perspective, the Fed will need to sound hawkish enough and lean to the market’s side to breach the major resistance of 114.54 in dollar/yen, triggering a new bullish round towards the 115.38 barrier.

If Powell announces the start of the bond tapering phase but plays down the aggressive rate hike pricing by the markets, the pair could dip below the supportive 20-day simple moving average (SMA) to meet the 113.00 level. The sell-off could sharpen later in the week, clearing the way towards the 112.00 – 112.30 region if non-farm payrolls signal the US economy is still far from full employment conditions.