GDP, industrial production and trade figures will be the first major set of data releases out of the UK in 2022 on Friday (07:00 GMT). However, as the data was collected before the Omicron variant started spreading like wildfire and as no new restrictions are currently on the horizon, markets will be more focused on the Bank of England’s next course of action. Rate hike expectations are building up again and the renewed speculation has put the wind in the pound’s sails. Omicron: keep calm and carry on

Although it’s too soon to reach a definitive conclusion about the economic impact of Omicron, it is looking increasingly likely that this latest wave gripping Britain and many other parts of the world can be ridden without shutting down large swathes of the economy. Yes, hospitalizations are rising, but they remain below the peaks seen in previous waves. This can only be a good thing for the economic recovery that has been dealt several setbacks during the course of the pandemic and must come as a relief to policymakers. 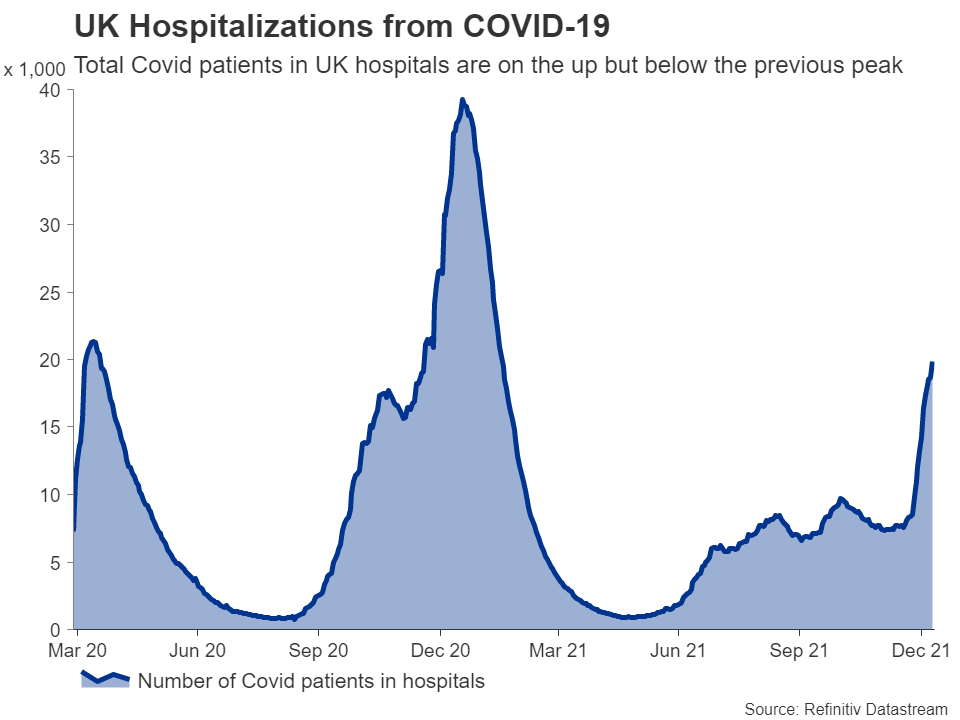 The recent flare up in price pressures has central banks most worried about inflation in decades. The Bank of England has already hiked interest rates once to keep a lid on surging inflation in the UK and could do so again at its next meeting in February. If Omicron had turned out to be more dangerous, policymakers would probably have proceeded much more cautiously with further tightening.

Supply disruptions not going away

But after Prime Minister Boris Johnson ruled out additional measures for England in the New Year, there is nothing stopping the BoE from raising the Bank Rate again in February by 25 basis points. If anything, Omicron has only heightened concerns that the pandemic-related supply constraints will likely persist well into 2022, forcing central banks to get even tougher on inflation.

Unless the economic conditions in the UK take a dire turn for the worse, market participants will continue to price in a strong probability of four rate hikes by year end. Friday’s data is unlikely to alter this outlook.

GDP growth is forecast to have accelerated to 0.4% month-on-month in November, after unexpectedly slowing to just 0.1% in October. This would push up the 12-month growth rate to 7.5% from 4.6% before. The expansion is expected to have been driven by the services sector, which is predicted to have risen by 0.5% m/m, as manufacturing and overall industrial production are both projected to have grown by a more meagre 0.2% in November. 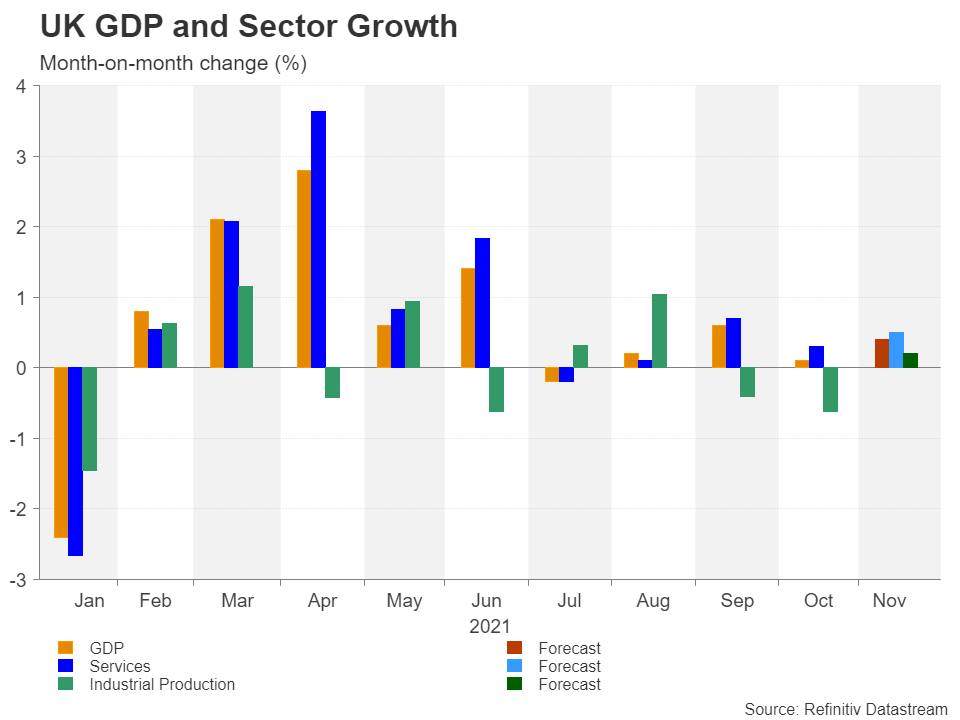 Other data on Friday will include Britain’s trade balance in goods, which is expected to have widened slightly in November, although the figures rarely impact the pound these days. With the 10-year yield on UK gilts surging to 1.20% this week – the highest since late October, which itself was a post-pandemic high – sterling has been on a roll over the past month. The pound’s trade weighted index just reached the highest since the Brexit referendum in June 2016. Its gains versus the euro have been particularly notable, climbing to the highest in nearly two years.

How much further can the pound rally versus the euro?

Euro/pound has breached all of its moving averages and is headed for the 0.83 mark. If this handle is broken too, only the 0.82 and 0.81 psychological levels stand in the way of the declines stretching towards the 123.6% Fibonacci extension of the February-March 2020 rally, which lies at 0.7992. On the upside, the 20-day moving average at 0.8420 is the nearest key resistance for the pair.

Whilst the Bank of England is looking more and more likely to lift borrowing costs in February and this should keep sterling well supported in the near term, there could be some slight downside pressure for the currency from renewed Brexit woes as London and Brussels are still locked in talks to try and resolve the impasse over the contentious Northern Ireland protocol. In addition, Johnson has been facing scandal after scandal in recent weeks and some political turbulence in the upcoming weeks shouldn’t be ruled out.