The Reserve Bank of New Zealand (RBNZ) will wrap up its upcoming meeting at 02:00 GMT Wednesday. Economic data have lost some momentum lately and as a result, markets have priced out expectations for rate hikes. That said, the economy remains in good shape overall. As for the kiwi, the outlook still seems positive, just not against the US dollar.Housing market on fire

Quite a lot has happened since the RBNZ last met in February, but since developments have been both positive and negative, they will likely cancel each other out in the central bank's eyes.

On the bright side, the island remains virtually virus-free. Because of this, Australia and New Zealand agreed to establish a 'travel bubble' between them, so there is some relief coming for the struggling tourism sector. Additionally, the government will raise the minimum wage by roughly one kiwi dollar to $20 per hour, which will hopefully boost spending in the economy.

However, the data pulse has started to slow. Retail sales and business confidence both declined lately, while economic growth disappointed in Q4. That said, the RBNZ already expected a gradual slowdown in its latest economic forecasts, so this won't be any huge surprise. 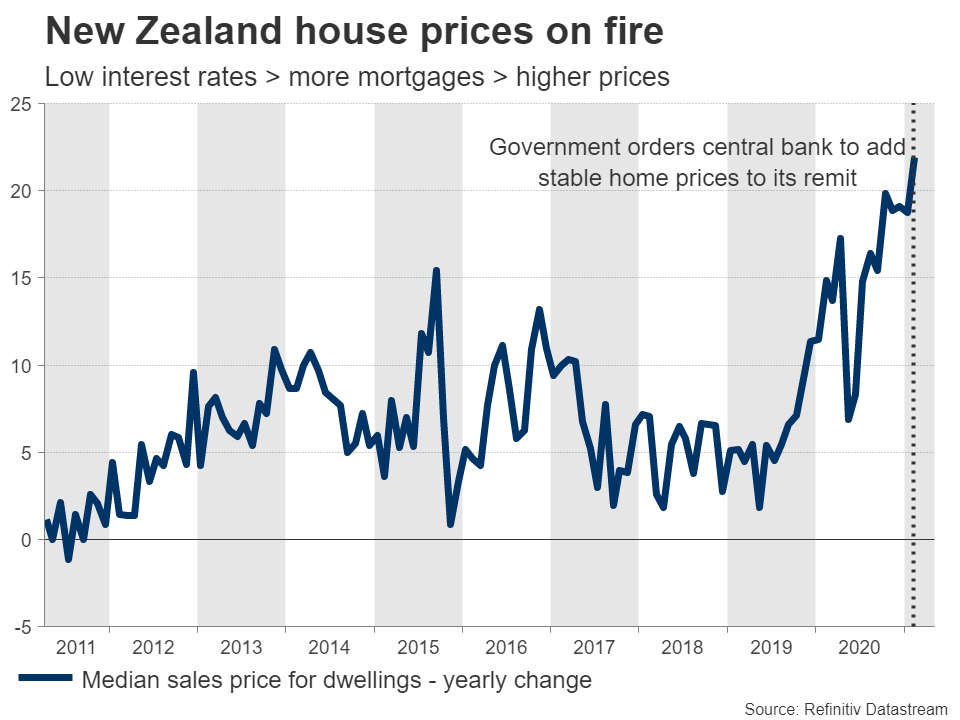 The other piece of news is that the RBNZ's mandate has been changed to also consider the impact on home prices when formulating decisions, in addition to keeping inflation stable and promoting full employment. House prices in New Zealand have been on fire lately as low interest rates encouraged more borrowing for mortgages. This change essentially makes it harder for the RBNZ to cut rates again.

RBNZ to 'hold the line'

Turning to the upcoming meeting, no policy changes are on the cards. Given the mixed developments lately, it is also difficult to envision the RBNZ changing its language either. Policymakers will likely repeat that they are 'on hold' for the foreseeable future.

There is no real need to push back against market pricing for future rate hikes. Markets are currently pricing in around a 30% probability for a rate increase by this time next year, which seems fair given the solid shape of the overall economy. Plus, this probability declined substantially lately, so the market itself is having doubts.

If the RBNZ simply reaffirms its wait-and-see stance, any reaction in the kiwi is likely to be minor.

Bigger picture positive, but mind the US dollar

Overall, the kiwi's fortunes will depend mostly on how the economy performs, the speed of vaccinations globally, commodity prices, and risk sentiment in the markets. All of these factors seem to be improving, so it is difficult to be pessimistic on the currency. 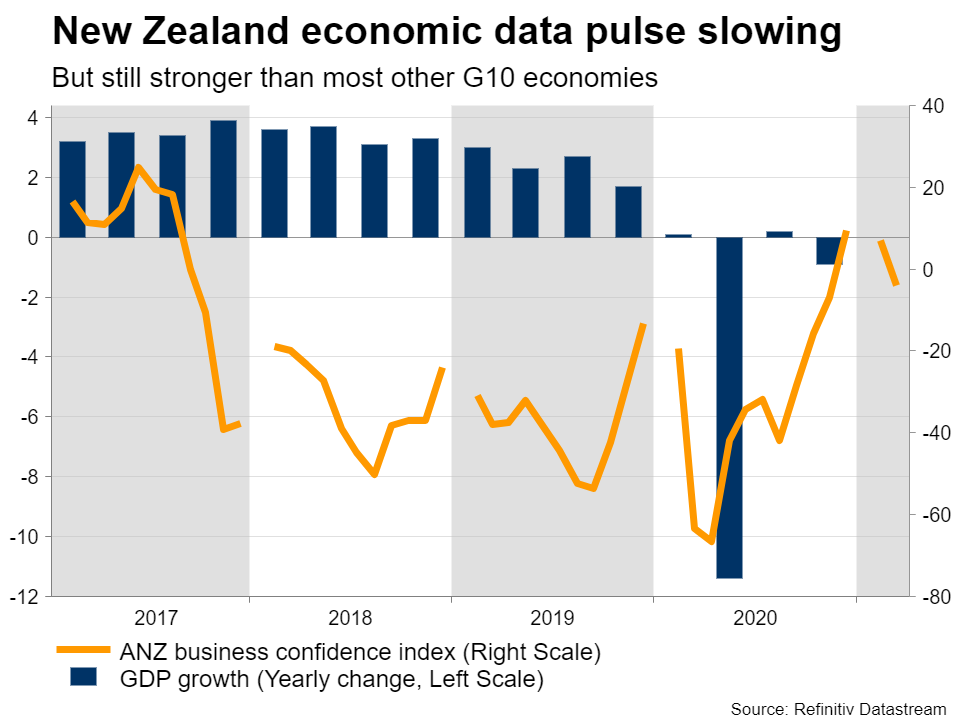 New Zealand is almost virus-free and the economy is stronger than most other regions thanks to fewer lockdowns, global vaccinations are moving forward, dairy prices are elevated, and America is about to unleash a landslide of stimulus that could keep market happy for a while.

The 'catch' is that the outlook for the US dollar seems promising too with the American vaccination program firing on all cylinders, so any future gains in the kiwi might not be reflected in dollar/kiwi.

Instead, euro/kiwi or kiwi/yen might be better candidates. Despite the latest rebound, the prospects for the euro remain bleak, with the region still partially locked down, behind in stimulus, and unlikely to catch up in vaccinations. It's a similar story for the yen, which is likely to suffer as the global economy heals its wounds, thanks to the BoJ keeping a ceiling on Japanese bond yields.

Taking a technical look at kiwi/yen, immediate resistance to advances could come from the 78.00 region, before the recent top of 79.15 comes into play.

On the downside, preliminary support may be found near the 76.70 zone, a break of which would turn the focus to the latest low of 75.65.