The latest employment report out of the United Kingdom will get the pound’s attention on Tuesday, which will be followed by GDP growth figures on Wednesday, both due at 06:00 GMT. The pound has gone from the best performing major currency at the start of the year to one of the worst over the past month as investors have downgraded their growth expectations for the British economy. Will the upcoming data send fresh warning signals about the UK’s economic health, or will they ease investors’ concerns? 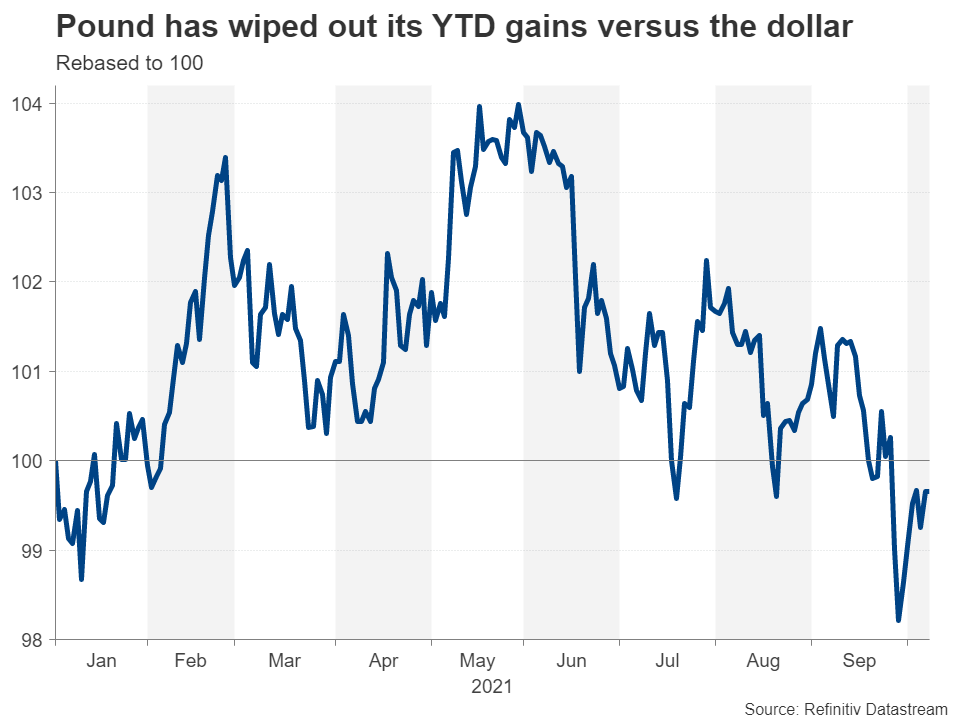 Bottlenecks in global supply chains and the resulting shortages are being felt across all the major economies but they seem to be more acute in Britain, with many blaming the country’s departure from the European Union for exacerbating the problem. Specifically, the UK is experiencing a severe shortage of truck drivers, which is impacting everything from food deliveries to supermarkets to fuel supplies for petrol stations.

However, whilst there might be temporary fixes for the problems in the haulage industry, its associated shortages are not the only risks facing the UK economy. The soaring cost of natural gas, which Britain depends on for a big chunk of its non-renewable energy, has led to the collapse of several electricity providers and customers could soon see their bills skyrocket.

The combination of higher fuel prices and wages for truck drivers is likely to significantly push up costs for businesses who are already dealing with a host of other supply disruptions. Hence, they may have no choice but to pass on the increased costs to consumers.

The Bank of England is already alarmed at the prospect of inflation not only rising more rapidly than anticipated, but also staying elevated for a considerable period of time. Policymakers have recently been dropping hints that interest rates could rise as early as this year. An early rate hike would only add to the pain for businesses and consumers, dampening economic growth even more.

Will there be signs of trouble from the data?

Some of the supply-related constraints might be visible in the August readings for GDP growth and industrial output due on Wednesday. German industrial production data that’s already been released showed the sector took a bigger-than-expected hit in August from the supply problems. A similarly poor showing for the UK could weigh on sterling. 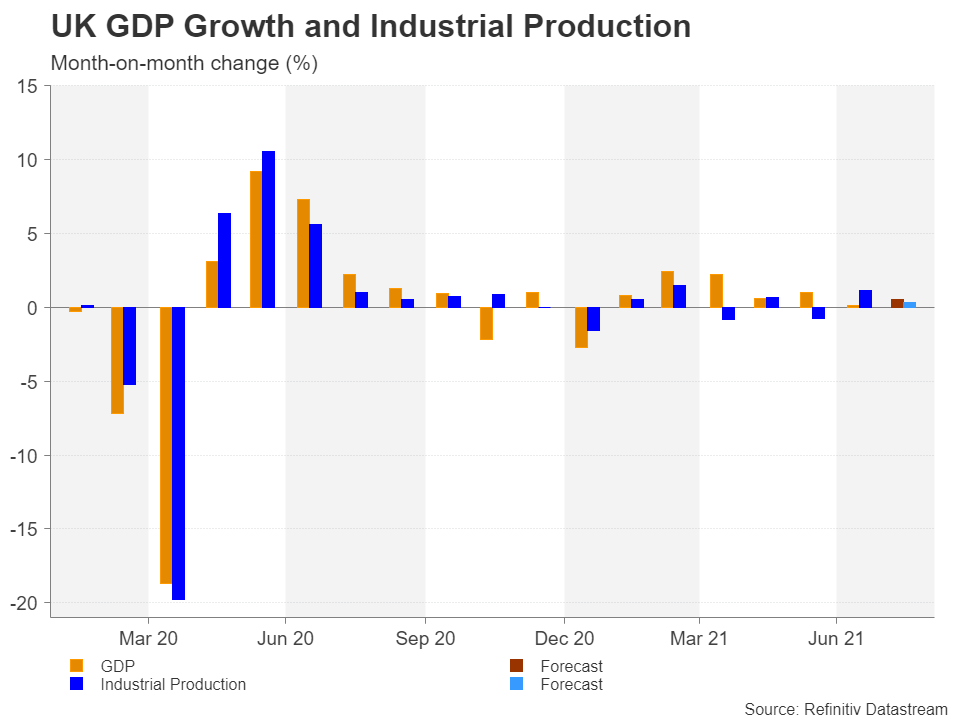 Investors will also be focusing on the jobs numbers coming out a day earlier for signs that more people might have joined the dole queue as the end of the government furlough scheme approached at the end of September. In particular, the claimant count and payrolls data for September will probably garner more interest than the headline employment print, which is one month behind.

Should unemployment claims, which have been falling since April, start to rise, it could flag a big jump in joblessness in October. However, if company payrolls continued to increase strongly in September amid the labour shortages, that could offset concerns about the effects of the furlough scheme drawing to a close.

So where would all this leave the pound? The currency is currently attempting to overcome strong resistance in the $1.3630 region and overall better-than-expected numbers could help to overcome it, opening the way for the $1.37 handle. However, should the data badly miss the forecasts, fuelling worries about growth, cable could head back towards the September trough of $1.3410, which was a 9-month low. Below that level, the next target for the bears is the $1.33 mark that lies slightly beneath the 161.8% Fibonacci extension of the April-June upleg.

In the bigger picture, however, the pound’s direction will likely be determined more by the global growth outlook that sets the tone for broader risk sentiment and whether the US Federal Reserve will stay as hawkish given the growing downside risks. In the meantime, a more hawkish Bank of England will probably lend only modest support to sterling as investors are not convinced premature rate hikes are the way to go.