The UK is moving to the next phase of reopening this week, with investors looking for signs of growth in the monthly GDP growth figures due on Tuesday at 08:30 GMT. Industrial output and trade data will be released on the same day, though overall the stats may not fully reflect the growing optimism in the economy, likely leaving the pound unaffected although some signs of expansion are already evident.US fiscal stimulus & AstraZeneca the key headwinds for pound

Traders have been driving the British pound higher in the first two months of the year in hopes that the vaccination rollout in the UK, which is one of the fastest in the world, could enable the economy to reopen and grow at a quicker pace than other economies. The rally, however, came to a halt after Congress solved the fiscal uncertainty in the US and breathed some life back to the dollar by approving Biden’s $1.9 trillion stimulus plan. Shortly after, the US president confidently announced a larger infrastructure bill of $2.25 trillion dollars despite the rising inflation fears, further enhancing the strength of the dollar.

However, given the UK’s great performance on the vaccine front, the US story would not be able to hurt the pound alone if the rare but serious blood symptoms linked with AstraZeneca jabs had not popped up. The AstraZeneca vaccine has been a national pride for Britons and the backbone of the speedy inoculation program, but the negative health warnings from the European Medicines Agency (EMA) have further damaged the confidence in the vaccine, which is cheaper and easier to store, and responsible to deliver three billion doses this year. Although the EMA expressed the opinion that the benefits from the shots outweigh the risks, several European economies have restricted its usage in some age groups, adding extra pressure on the pound.

On the positive side, the discouraging vaccine news did not prevent Boris Johnson from further relaxing lockdown restrictions as the rate of new Covid cases and the death toll decelerated to the lowest in seven months. Non-essential shops and services will resume operation this week, likely boosting the pace of recovery in the second quarter if the removal of restrictions becomes a permanent situation, as the British Prime Minister promised last month.

The latest upbeat Markit/CIPS manufacturing and services PMIs for March have already brightened the outlook for the second quarter, showing business optimism rising to a seven-year high, new orders speeding up to the highest in three years, and the pace of permanent hiring advancing to the largest in six years. In evidence of rising inflationary pressures, input prices and costs charged by factories surged substantially as well, while the average percentage of disposable income saved in the final quarter of 2020 was the second biggest ratio in history according to the Office for National Statistics, raising speculation that the extra cash could fuel a sharper growth if restrictions further ease.

Perhaps Tuesday’s monthly GDP growth data may not fully reflect the above economic optimism and could be outdated as lockdown measures were mostly in place during that period. Nevertheless, the report will be closely watched for any significant upside surprises, which could raise speculation that the UK economy has started to pick up steam before the reopening announcement in March. 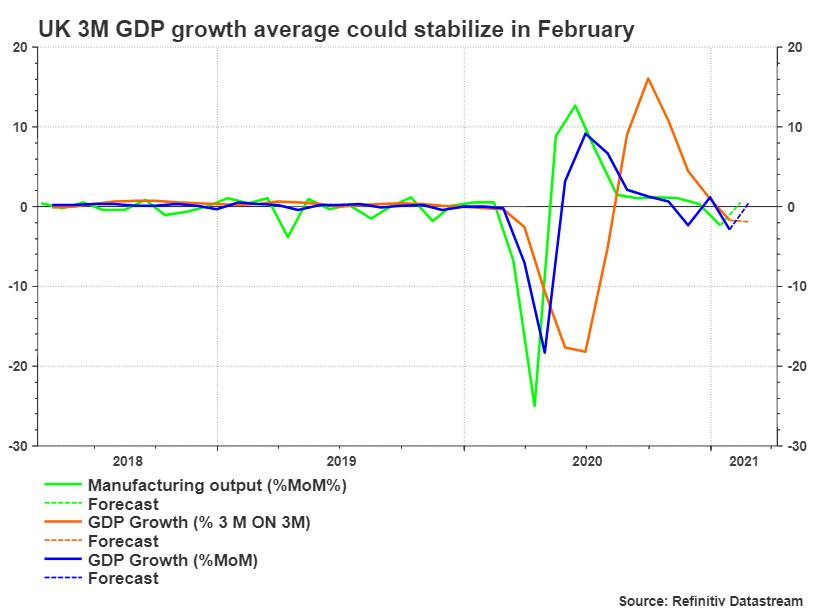 Currently, markets are expecting the three-month average to have slowed to -1.9% y/y in February from -1.7% in January, while the monthly and yearly GDP changes are forecast to have improved to 0.6% and -8.6% respectively. Separately, the industrial and manufacturing output could also show some recovery on a monthly basis if the data strengthen to 0.5% from -1.5% and -2.3% respectively, though this could again be old news, causing minor volatility to the pound. On the other hand, the good’s trade deficit with EU and non-EU countries is said to have widened, raising some caution about the UK’s trade position.

From a technical perspective, an upside correction is possible in pound/dollar if the key support around 1.3670 holds firm. Immediate resistance could be detected near the 23.6% Fibonacci of the latest downfall at 1.3800, while slightly higher, the 50% Fibonacci of 1.3887 may be another obstacle before the spotlight turns to the next key Fibonacci levels of 1.3954 and 1.4020.

Alternatively, if the 1.3670 floor collapses, the 1.3600 round level may attempt to stop any decline towards the 1.3500 key mark, where any violation would neutralize the market structure in the long-term picture.