Consumer prices in the United States are expected to have risen by north of 4% for a second month in May. But after the mediocre jobs report, few think another jump in CPI would be a game changer for the Fed. The data, due on Thursday at 12:30 GMT, may therefore be greeted without much fanfare. However, a busy week for US Treasury auctions means there are other sources of volatility to worry about, hence, a muted response is far from certain if markets are already stirred.Inflation within sight of 5%

The US dollar is still reeling from last week’s roller-coaster ride as the latest taper fears that had led the currency higher proved to be a false alarm after nonfarm payrolls disappointed again on Friday. With the next major release being the CPI report for May, it’s looking a lot like a repeat of last month when a big NFP miss was followed by a big CPI beat. 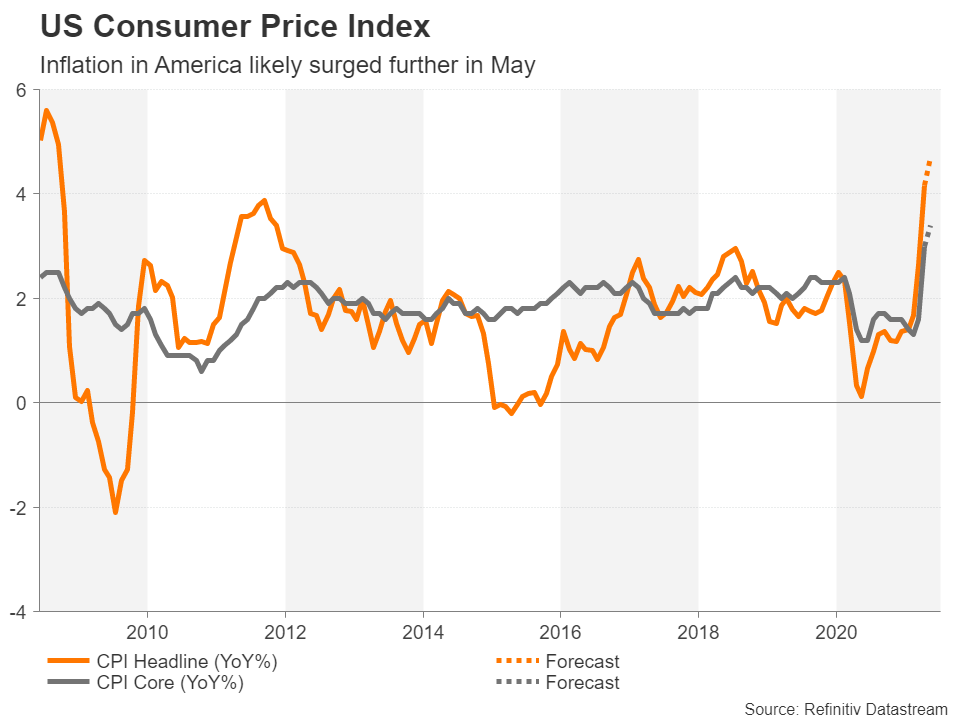 Some risk of market overreaction

A bigger-than-expected surge in headline CPI, particularly to or above the symbolic 5% mark, could spark a bit of panic amongst investors, especially in bond markets. However, whilst there have been a number of surprises in US data lately, on balance, they more or less support the Fed’s view that the jobs recovery will take time and that the price hikes are being driven mainly by transitory factors. Thus, the most probable scenario is that markets will take the data in their stride.

Still, there may be some sensitivity to the CPI inflation metric in the run up to the Fed’s policy gathering on June 15-16 and there could be added volatility from fluctuations in bond yields as the Treasury Department is planning to auction $120 billion in new debt this week.

Monthly rise in CPI could hold the key

As far as the immediate reaction to the inflation figures is concerned, the important thing to watch is the monthly print as April’s worryingly strong overshoot from the estimates suggested that there’s more than the low base effect of 2020 that is pushing prices higher.

The dollar is currently struggling to hold above its 50-day moving average against the yen and without any fresh upside, the pair is at risk of slipping back below the 109 level (the 23.6% Fibonacci retracement of the January-March upleg). Below the 23.6% Fibonacci, the April trough of 107.46 is the next major support that could come into focus.

On the other hand, another huge positive surprise in the CPI data could propel dollar/yen above the recent resistance area around 110.3, bringing the 111 level back within range.

Treasury auctions pose an upside risk for the dollar

In the bigger picture, although the dollar’s downtrend appears to have been halted by taper speculation, it is highly unlikely that the Fed will signal something other than simply the start of discussions on how and when to begin scaling back asset purchases at its June meeting. So it’s probably too soon to see a meaningful rebound in the greenback just yet.

Should the inflation numbers fail to revive the dollar, there could be a short-term boost, however, from a Treasury auction going awry. The Treasury Department will sell $58 billion of three-year notes on Tuesday, $38 billion of 10-year notes on Wednesday and $24 billion of 30-year notes on Thursday. Poor demand for one or more of those auctions could send the yields on the respective Treasury notes spiralling higher, potentially lifting the greenback as well.

Otherwise, in the absence of any new shocks, investors will have to wait for Fed Day to get fresh cues for the dollar.

View All
XM Research - 20 hours ago