US inflation: has it peaked? - Forex News Preview

The consumer price index for April is due out of the United States on Wednesday (12:30 GMT) and the latest report could be the most crucial one yet as it could show that inflation has peaked, or at the very least that it is slowing. The Federal Reserve just hiked interest rates by 50 basis points and is likely to raise them again by a similar amount at the next meetings. This has propelled the US dollar to 20-year highs against a basket of currencies. Treasury yields have also jumped, while stocks have tanked. But are markets poised for a reversal should the surge in prices start to wane?CPI may have topped at 8.5%

Even though inflation hit a 41-year high in March, American consumers have kept spending and the labour market has continued to tighten. The recent batch of upbeat data is helping to dispel fears of an imminent recession, further bolstering the dollar amid the heightened risk of a downturn in other countries. But this unprecedented period of swelling inflation may be coming to an end.

The 12-month rate of CPI is expected to have eased to 8.1% in April from 8.5% previously. More significantly, the month-on-month rate is projected to drop sharply 1.2% to 0.2%, which would mark the slowest pace of increase since November 2020. The core figure, which excludes food and energy prices, is also forecast to moderate, falling from 6.5% to 6.0% year-on-year, although the monthly rate is predicted to pick up to 0.4% from 0.3%. 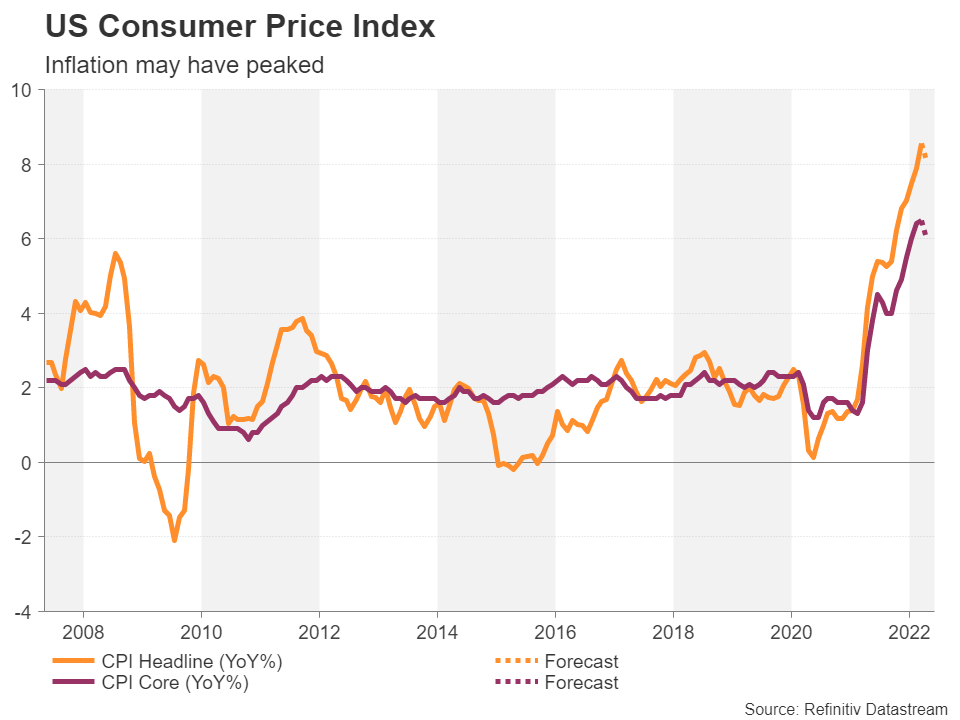 Have we reached peak inflation?

When core CPI rose by less than expected in March, many investors saw this as a sign that inflation is near its peak. There was further proof of this when the core PCE price index – the price metric that the Fed pays more attention to – was also slightly weaker than anticipated. Therefore, if the headline rate does indeed slip in April for the first time in eight months, that’s likely to further intensify the belief that the worst of the price shock is over.

But that would not necessarily be the end of the inflation scare as the focus would then shift to how fast and how far it will fall. It’s worth remembering that inflation first started accelerating in the spring last year so the year-on-year comparison will naturally begin to slacken. Moreover, higher borrowing costs are expected to curtail demand in the economy so this will exert additional downside pressure on prices in the coming months.

Some price pressures are likely to persist

The main problem, though, in the US is that shelter costs, which make up almost a third of the CPI basket, are still rising on the back of strong demand for rental properties. This is something that’s been brought on by the housing crisis amid a shortage of affordable houses. The big jumps in rental payments are unlikely to subside quickly until more properties become available.

The widespread shortages of key components and raw materials look set to continue too, with the latest lockdowns in China wreaking fresh havoc on global supply chains that are still reeling from the Ukraine conflict.

Stocks looking for a reason to bounce back

On the bright side, there is some evidence to suggest that shipping costs, which soared during the pandemic, are past their peak and energy prices also appear to be settling below the highs from March when the West slapped sanctions on Russian oil and gas exports. Perhaps more importantly, several measures of inflation expectations in the US seem to be edging lower lately.

With equities deep in the doldrums and Fed year-end rate hike expectations still pushing higher, concrete signs that inflation is plateauing could inject a burst of optimism into the markets. However, a scaling back of Fed bets for December, which currently stand at 195 basis points, would be negative for the dollar.

Against the yen, the greenback is currently testing the 161.8% Fibonacci extension of the April pullback at 130.93. If this resistance holds, the pair could initially slide towards the 61.8% Fibonacci of 128.46 before turning its sights to the crucial supports at 127 and 125.

However, if the CPI data fails to cool rate hike bets and dollar/yen smashes above the 131 level, the 261.8% Fibonacci of 133.40 could become the next major target for dollar bulls.

There can be no doubt that peak inflation will be a significant moment for the markets, but Wednesday’s numbers may not be conclusive enough to confirm we’re there yet. The next few months will be critical as investors might hit the panic button if the economy begins to slow down before price pressures have substantially eased. But in the meantime, traders will likely welcome any encouraging trace of peak inflation.