Although the dollar ended last week on a positive note, it’s been trading in a corrective fashion overall for more than a week now, due to growing speculation that the Fed may soon need to start reducing the pace of its rate increases. Although this is not expected to happen this week, investors are sitting on the edge of their seats in anticipation of clues and signals with regards to the future course of action. The decision and the statement are scheduled to be made public on Wednesday at 18:00 GMT, with a press conference by Fed Chair Powell to be held thirty minutes later.The switch

When they last met, Federal Reserve officials delivered their third consecutive 75bps rate increase and updated their projections to point to a terminal rate of 4.6% in 2023 and not any cuts until 2024. Up until a couple of weeks ago, they were all singing from the same hawkish song sheet, which combined with the hotter-than-expected inflation numbers for September, allowed investors to lift their terminal rate up to 5%. Even with a rate cut in the equation, interest rates at the end of 2023 were seen higher than the Fed’s own projection for the year. In other words, the market turned more hawkish than the Fed itself. 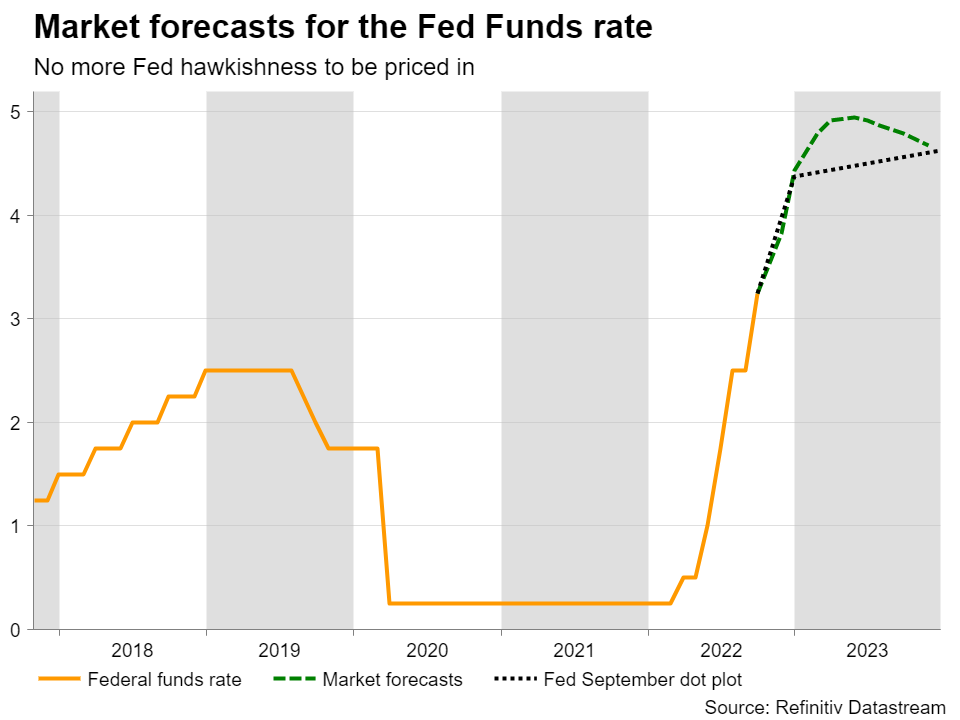 However, the whole aggressive-Fed narrative came into question a couple of weeks ago, when reports suggested a slowdown in rate increases from December onwards, with the view being echoed by some policymakers thereafter. What added more credence to the newborn dogma was the disappointing PMI and housing data last week, as well as the Bank of Canada’s decision to announce a smaller-than-expected hike and note that it is getting closer to ending this historic tightening crusade. This may have been interpreted as setting the tone for other major central banks, and indeed investors were proven right just a day later, when the ECB also opened the door to slower rate increases.

Investors are in full agreement that the Committee will serve its fourth consecutive triple hike on Wednesday, but they are split on whether the December increment will be of 50 or 75 basis points. And that’s still the case even after last week’s better-than-expected GDP data for Q3.

However, despite the sparkly GDP rate, a dive into the details revealed a different story. Domestic demand hit its lowest in two years due to the Fed’s aggressive hikes, while residential investment contracted for the sixth straight quarter. The nation’s economic health was overstated due to tumbling imports resulting in a shrinking trade deficit. Combined with the fact that the effects of the past cumulative tightening are not being fully felt yet, this suggests that there is still the likelihood of a modest downturn early next year. 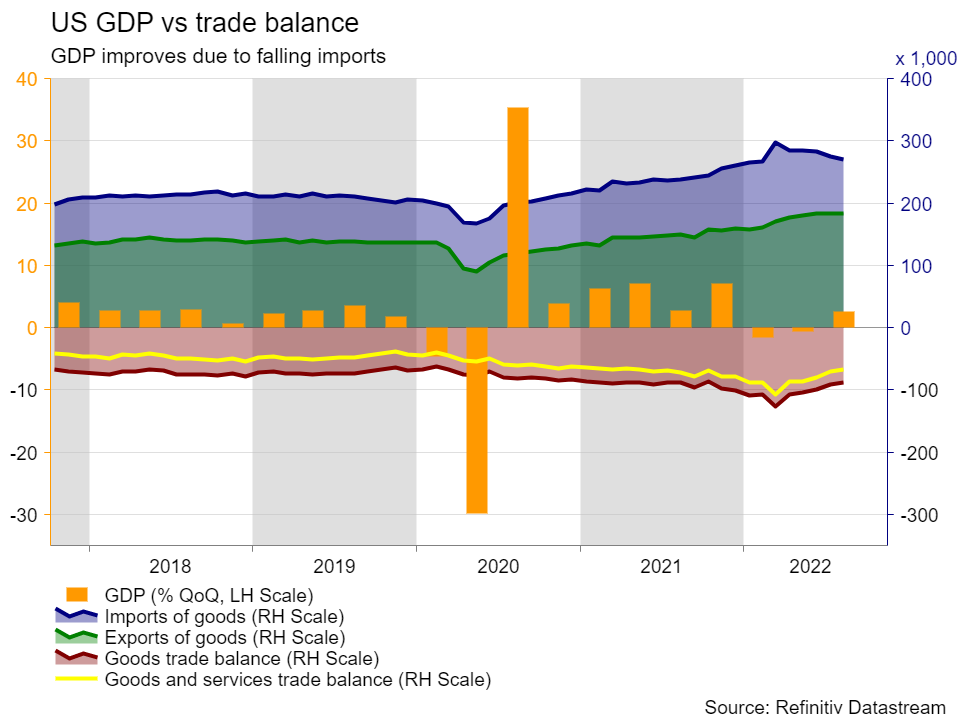 Ergo, Powell and his colleagues may confirm the narrative of slower future hikes due to growing economic risks. They may have begun considering the risk of overdoing it as inflation tends to react slowly to higher rates, let alone now that the distortions to the economy caused by the pandemic are still not fully resolved. Given that the market still sees rates higher than the Fed does in December next year, such an outcome could result in some more dollar selling as there is no more Fed hawkishness to be priced in. However, Powell may try to pass the message in a way that it does not give rise to substantial loosening of financial conditions.

Therefore, a potential retreat in the dollar may not be suggestive of a trend reversal genesis. After all, with other major central banks also hinting at slower rate increases, the Fed could hold onto first place on the hawks’ league. Traders may liquidate some more of their long dollar positions on Wednesday, but they may re-enter the game at lower, more attractive levels. A sanguine employment report on Friday could be a justification for doing so. Otherwise, the correction may extend for a while longer.

From a technical standpoint, the recent weakness in the greenback helped euro/dollar climb above the downtrend line drawn from the high of February 10, and although the pair pulled back on Friday, it stayed above that line. This keeps the case of a rebound firmly on the table. If the bulls indeed regain control, they could initially aim for another test at Friday’s high of 1.0100 or near the 1.0200 zone, marked by the peak of September 13. A break higher could pave the way towards 1.0370, slightly below the 200-exponential moving average. This is the territory around where traders may decide to buy dollars again.

Now, in case the Fed appears much more hawkish than expected, showing no signs of remorse, euro/dollar may quickly break back below the downside line and slide to the 0.9700 or 0.9535 zones. A breach of the latter support area would confirm a lower low on the bigger timeframes and may allow extensions towards the 0.9335 zone, defined as a support by the inside swing high of September 17, 2001.