Will the UK PMIs intensify worries over a recession? – Forex News Preview

After seeing UK inflation accelerating to double digits earlier this week, pound traders may now turn their gaze to the flash UK Purchasing Managers Indices (PMIs) for August, due to be released out on Tuesday at 08:30 GMT. With the preliminary GDP data revealing contraction in the second quarter of the year, traders may want more clues on how the economy has been faring thereafter.Are the UK PMIs headed towards contractionary territory?

There are no forecasts available at the time of writing for any of the three indices, but it is worth mentioning their July prints. The manufacturing PMI slid to 52.2 from 52.8, while the services one fell from 54.3 to 52.6. The composite index declined as well, to 52.1 from 53.7. Although all three of them remained above the boom-or-bust zone of 50, they’ve been trending lower since March. Therefore, combined with the BoE’s warnings over a recession, investors may be biting their nails in anticipation of whether the PMIs will get closer to the 50 line, or even fall below it. 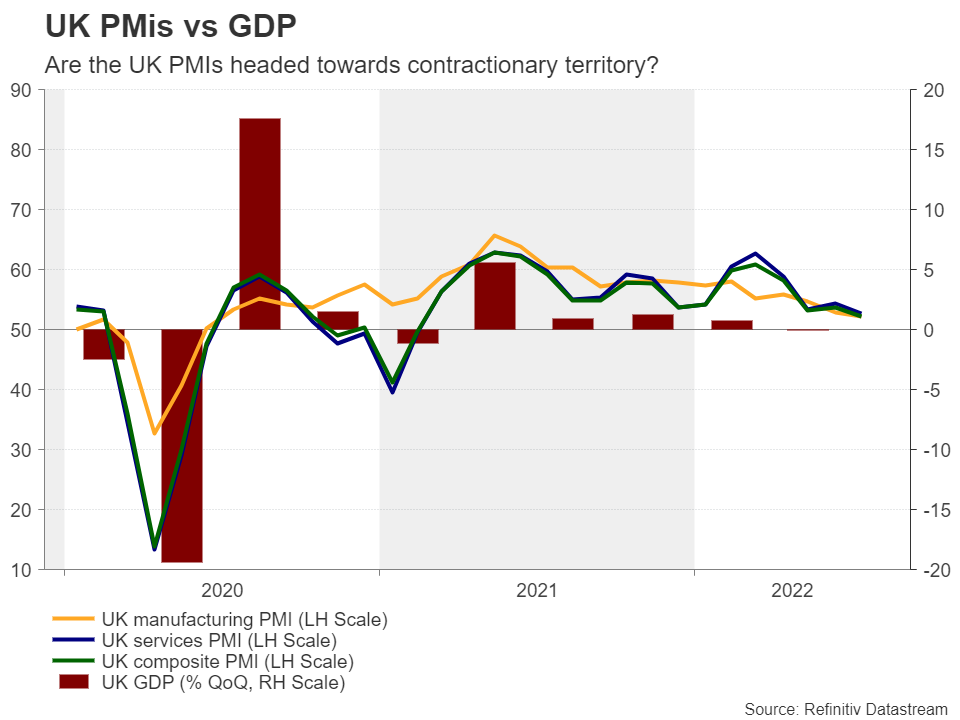 At its latest gathering, the BoE raised interest rates by 50bps to 1.75%, retaining the option to act more forcefully if deemed necessary. That said, officials maintained warnings over the UK economy entering recession, saying that this could happen this quarter and last for a whole year. That’s maybe why the pound stayed under pressure even after the UK became the first major economy to experience double digit inflation.

On Wednesday, the July CPI data revealed that the headline rate jumped to 10.1% from 9.4%, while the core rate, which excludes the volatile items of energy and food, rose to 6.2% from 5.8%. This suggests that prices are not rising only due to Russia’s restrictions of gas supplies, and that’s maybe why market participants were quick to raise their bets with regards to future rate hikes by the BoE. They now see the bank rate peaking at 3.75% in May next year, while ahead of the data, they were expecting it to peak at 3.25% in March. 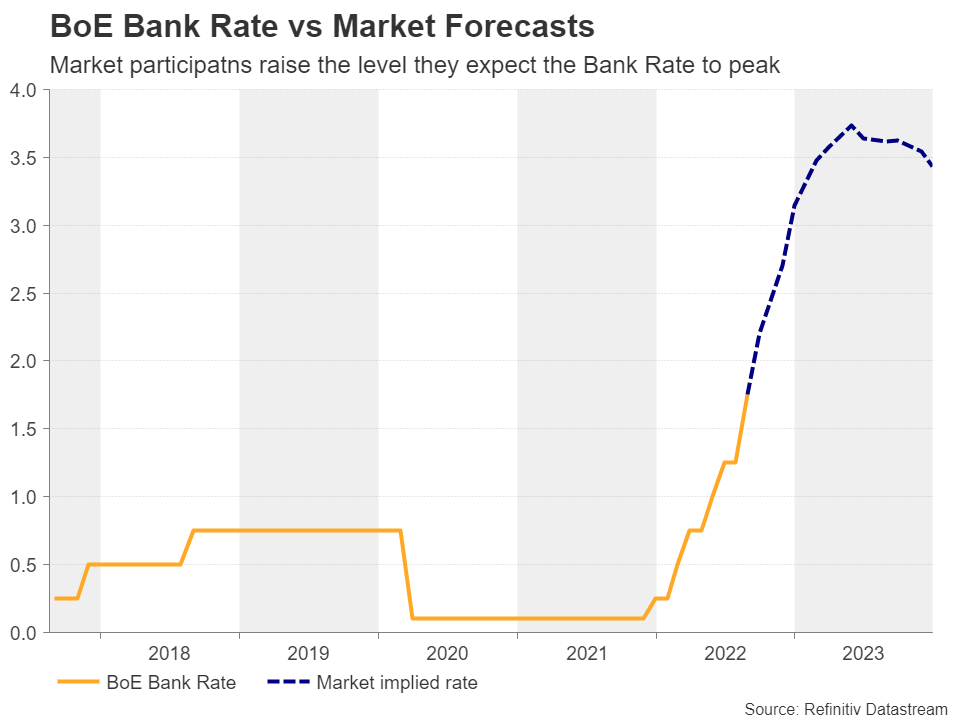 How big is the risk of a UK recession?

Maybe the pound failed to capitalize due to traders staying worried over recession risks rather than trusting the BoE relieving them from the pain of very high consumer prices. Yes, the employment data for June pointed to a labor market remaining tight, but although wages accelerated, real wage growth remained well into the negative territory. What’s more worrisome, during the first quarter of the year, the real disposable income of households slid by the most since we have data for. 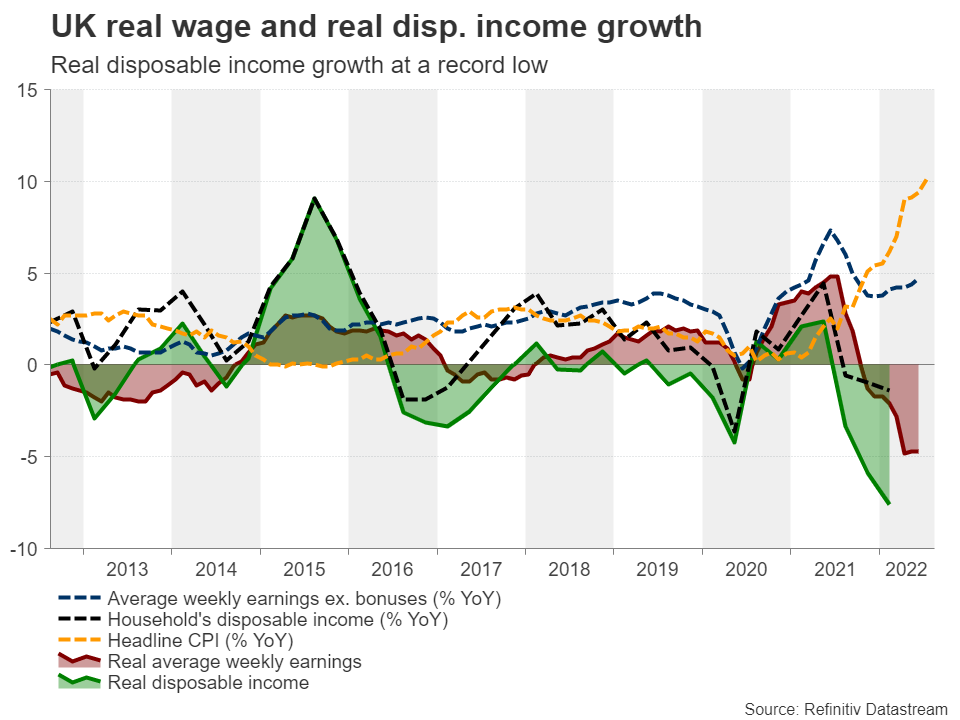 The market’s concern is also visible in the UK government bond market. Although yields have been in a steady uptrend due to the BoE’s actions, the difference between the 10- and 2-year yields turned negative this week for the first time since 2019 and continued well below the level hit then. The last time we saw the 10yr/2yr spread being that low was back in 2008, during the global financial crisis. 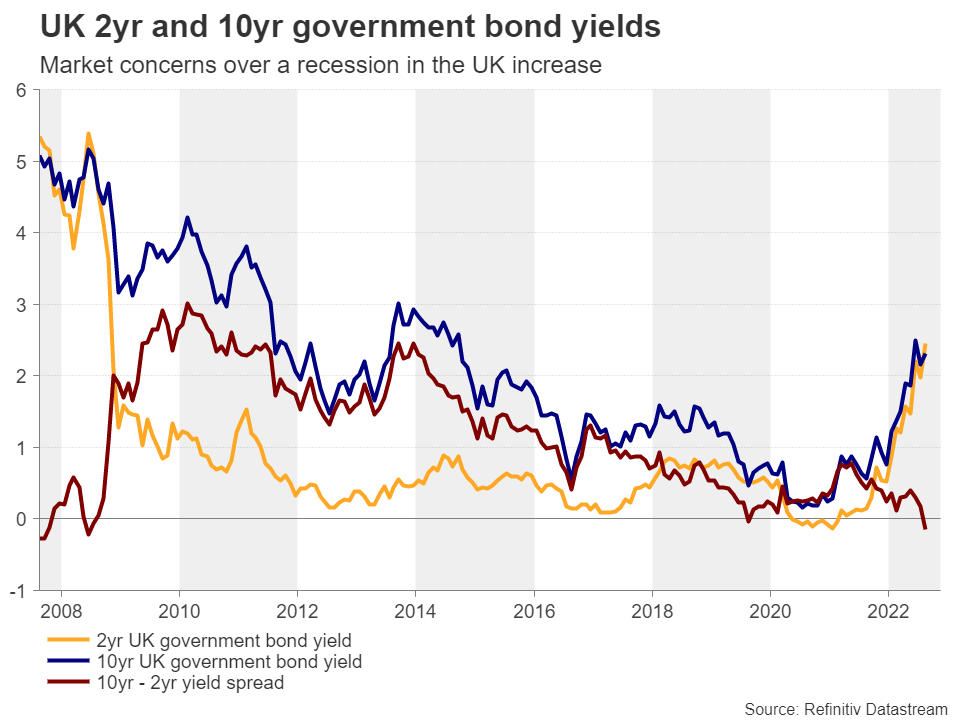 Pound breaks below 1.20 dollars. Is more trouble on the cards?

So, with all that in mind, lower PMIs, especially if any of the indices falls below 50, could spell more trouble for the British currency. Pound/dollar already fell below the 1.2000 psychological hurdle yesterday, which may have invited more bears into the game, encouraging them to push even lower in case UK data keeps disappointing. They may aim for the July 14 low of 1.1760, the break of which would confirm a forthcoming lower low on the weekly chart and probably set the stage for larger declines, perhaps towards the low of March 20, 2020, at around 1.1400.

Alternatively, improving PMIs may result in some pound buying, or better say, some short covering. Pound/dollar could rise back above 1.2000, but with the fundamental picture staying gloomy, this may be just a dead cat bounce before a new round of selling. For the outlook of this pair to change, a break above the key resistance zone of 1.2295, accompanied with notable improvement in UK economic data, may be needed.