How the pandemic made China stronger

The Covid-19 pandemic has stigmatized China as the birthplace of one of most awful diseases in modern history. But it is not all black for the second biggest economy in the world, although challenges remain, as its successful handling of the virus has likely marked another positive quarter in the end of 2020 at a time when new lockdown measures are prolonging growth agonies in the rest of the world.Covid-19, a national pride

China’s Communist governing party had a tough year, receiving words of hate for initially playing down the danger of Covid-19 and leading to the leakage of a global health crisis. But the truth is that the pandemic proved valuable in tightening the party's political grip in China and Hong-Kong.

With the virus attracting all the attention and the government imposing draconian measures to contain its rapid spread, aggressive demonstrations against China’s new national security law in Hong Kong calmed down and the leading party soon retook control. Moreover, citizens’ anger over the strict social distancing rules and the month-long health monitoring they went through early in 2020, without even receiving compensation, has now transformed to national pride and respect of the country’s successful response. Of course, rumors that China is hiding mass infections continue to feed foreign skepticism, but someone could also say that a large wave of infections is hard to keep in the dark.

From an economic perspective, manufactured-good exporting countries such as China have been less exposed to the tourism damage the Covid crisis caused in service-oriented economies. Nevertheless, subdued consumption abroad emerged from lockdown measures, and a stronger national currency are still a headwind for China’s international sales. Exports for December, which are due out on Thursday, are expected to shrink to 15% year-on-year from an almost three-year high of 21.10% in November, while imports are said to tick up to 5.0% y/y from 4.5% previously, pressing the trade balance lower to $72.35 billion. Even if that is the case though, the data would still hold within healthy economic territory, causing little market discomfort. 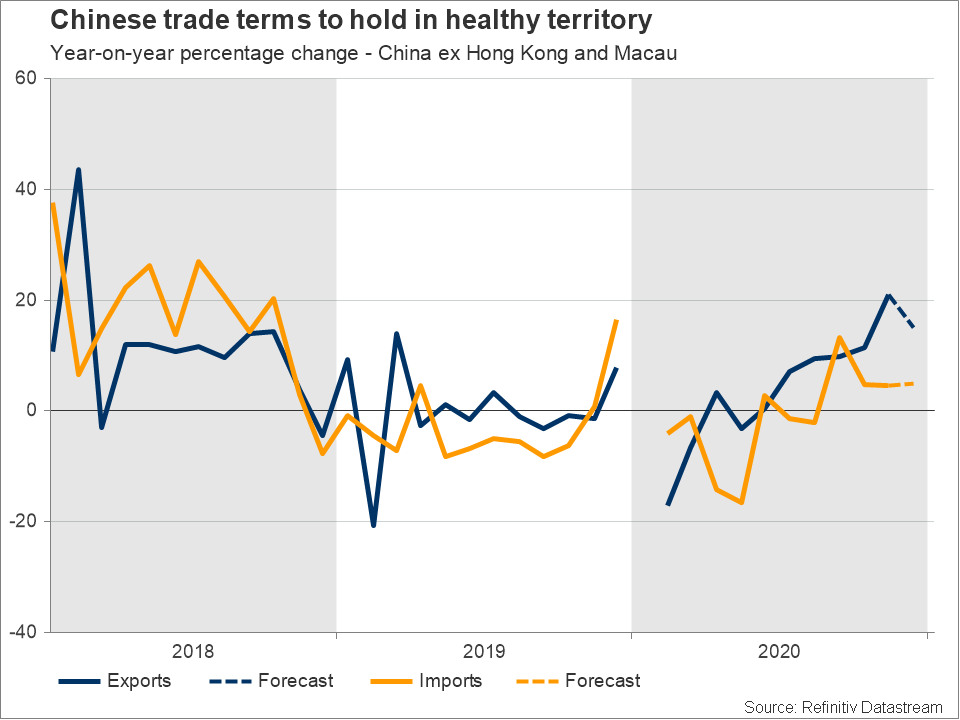 Internally, retail sales and industrial output have been posting positive growth rates during the last quarter of 2020, while inflationary pressures have also improved, though marginally, adding to hopes that despite its relatively smaller stimulus efforts, the economy may have finished the turbulent 2020 year on an optimistic note unlike its US and European counterparts.

The bond market is another advantage for China and a source of demand for the yuan. Although investing in Chinese securities requires some risk taking due to the complicated political landscape, the 3.0% yield in the 10-year Chinese bond will not pass unnoticed when compared to the US equivalent of 1.0% and the negative European ones. The puzzle, though, is that China's corporate debt levels are already elevated and that could present a burden in the absence of continually high growth. 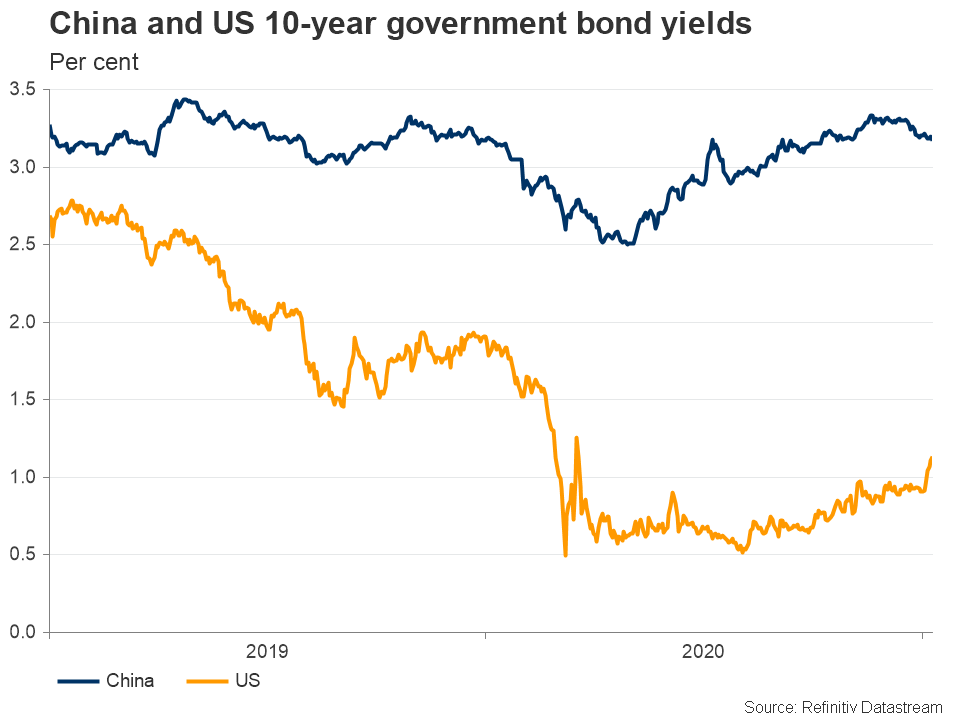 Besides, investors tend to shift their funds in regions with the highest growth potential and China could be one of those places in 2021 according to the IMF, which predicts expansion to accelerate to around 8.0%.

The stock market had a constructive year too in the absence of any direct trade tensions with the US and in support of fiscal and monetary stimulus, with the blue-chip CSI 300 finally surpassing its 2015 peak and touching a 13-year high last week. There are some valuation jitters pressuring Chinese indices, but apparently such worries must be bigger in the US stock markets.

Even though the future is promising for China, the economy is not totally out of the woods yet. Trade tensions with the US could re-escalate despite Joe Biden’s election as China’s fast-growing tech sector and its expansive external policy threatens the US and European dominance, especially as global business competition moves to a virtual platform. Specifically, the new US president messaged to markets during his campaign that he will seek global cooperation to influence China’s behavior, but that could be a tough call since the EU and several Asian countries have already negotiated individual long-term agreements with Beijing.

Nevertheless, in the near term, and as far as the virus remains the main topic in global markets, China could benefit from its relatively better Covid conditions, keeping some footing under the yuan and the Australian dollar, which saw little selling from the recent Australia - China trade conflicts.

Looking at AUD/USD from a technical perspective, the pair has strengthened its March uptrend considerably above the 200-weekly simple moving average (SMA), increasing the case of a downward correction as the RSI seems to have topped in the overbought territory.

Should the bears take over, a decisive close below 0.7635 could confirm additional losses towards the crucial 0.7400 level, where any break lower would make the ongoing uptrend less credible.

Note that Q4 GDP growth figures out of China next week are expected to show a stronger annual expansion of 6.1% versus 4.9% in the previous quarter. On a quarterly basis, projections are also optimistic, suggesting a faster expansion of 3.2% compared to 2.7% in Q3.