The US President will deliver a keynote speech on Wednesday, during which he will outline his plans for a multi-trillion-dollar infrastructure package. The catch for the markets is that this bill might be partially funded by raising taxes on businesses and investments. The dollar and stocks might suffer a decent correction as markets grapple with the threat of higher taxes, but the overall trajectory for both seems positive.Taxman is coming

The prospects for the US economy keep getting brighter. Millions of people are still out of work, but that may be a temporary phenomenon. Congress has thrown tremendous amounts of money at the problem and almost 45% of Americans have already received a vaccine jab.

It will probably be a stellar summer in economic data, as direct money transfers and all the pent-up demand from unchained consumers come together to unleash a powerful spending boom. But when things seem so incredibly cheerful, it's often fruitful to consider what could go wrong.

Markets have been focusing on the risk of the Fed raising interest rates next year if the economy truly heals its wounds very quickly, but perhaps the real risk is on the fiscal side. President Biden is pushing hard for another investment package in the trillions of dollars, this time on infrastructure and child care, which will be partially financed by raising taxes on corporations and capital gains. 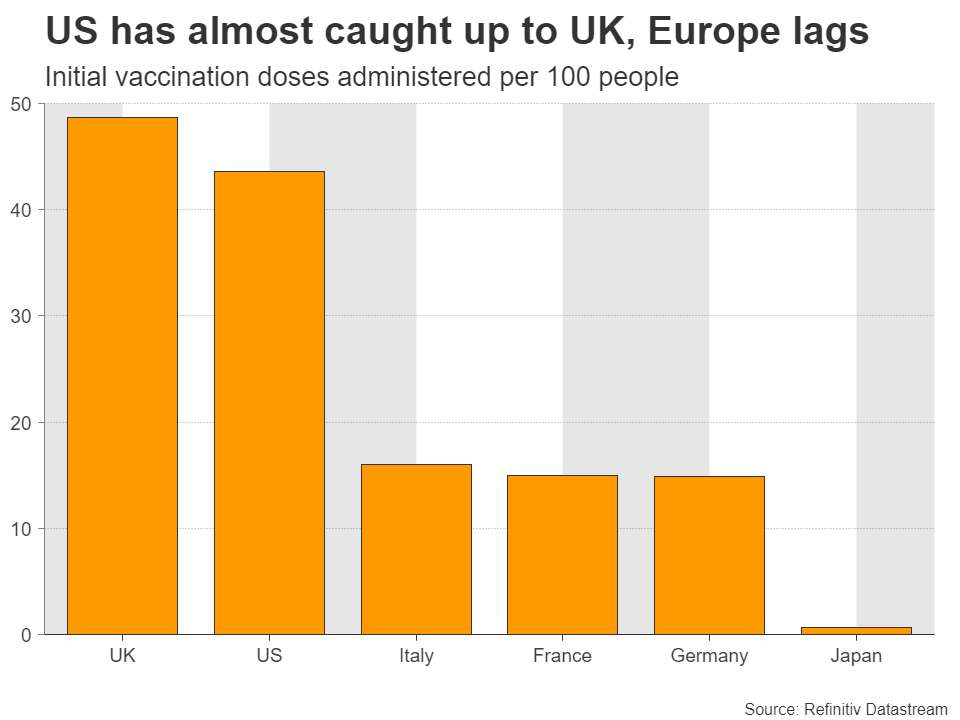 Raising taxes to fund productive investments like infrastructure will probably have a positive net impact on the economy, but the impact on financial markets is a different story.

Much of the market reaction will depend on how much Biden aims to raise taxes. Media reports suggest the corporate rate could be hiked to 28% from 21% currently, while capital gains on investments might be taxed in a progressive manner like regular income, with the rate scaling higher as the amount itself increases.

This could have serious implications for stock markets and the dollar. If investors fear that capital gains taxes are going to rise, they could lock in some profits on their shares with the current lower rates, generating a wave of selling. Similarly, the sky-high valuations of several companies might not make much sense with higher corporate taxes. 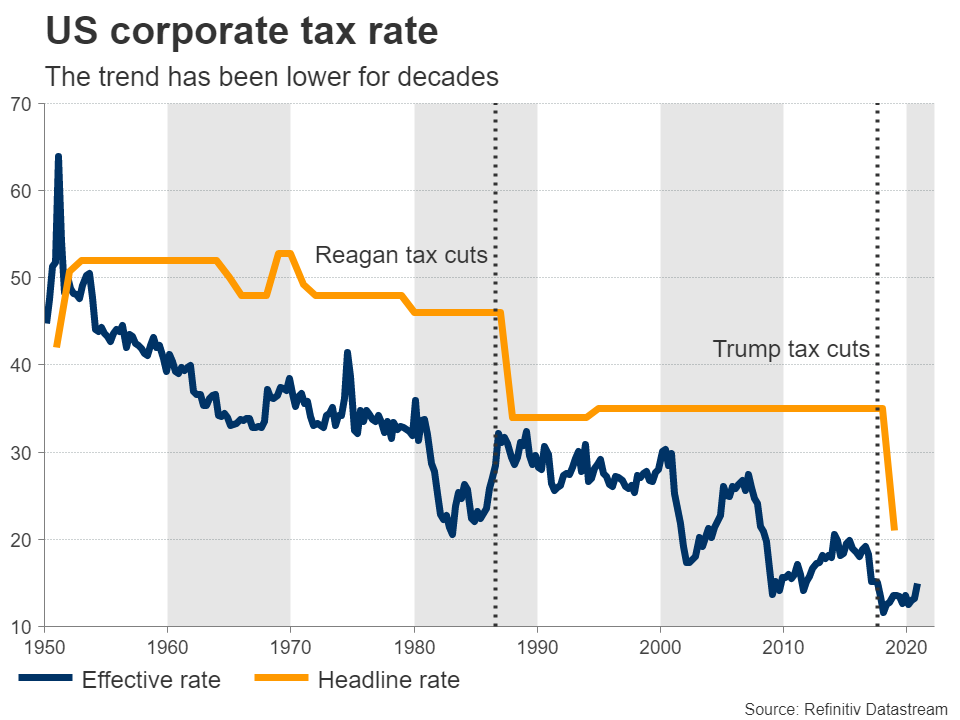 As for the dollar, it might also experience a short-term correction. The playbook here is the market reaction before the Trump tax cuts of 2017. Both equities and the dollar skyrocketed as corporate taxes were cut, so it is natural to expect the opposite reactions this time. In a nutshell, higher taxes imply fewer capital flows to America.

Correction, not a reversal

Taking a step back, even if we see some negative reactions as markets grapple with the prospect of higher taxes, the overall path for both the dollar and equities seems higher.

The main argument is that the US economy is likely to do great. The level of spending that has been unleashed is simply unprecedented. The stock market might kick and scream at first, but ultimately, markets track the economy.

Additionally, Biden's infrastructure plans will be only partially funded by tax increases. That's crucial because it implies the government might keep adding to the deficit even after it has raised taxes. This could soften the blow for investors. 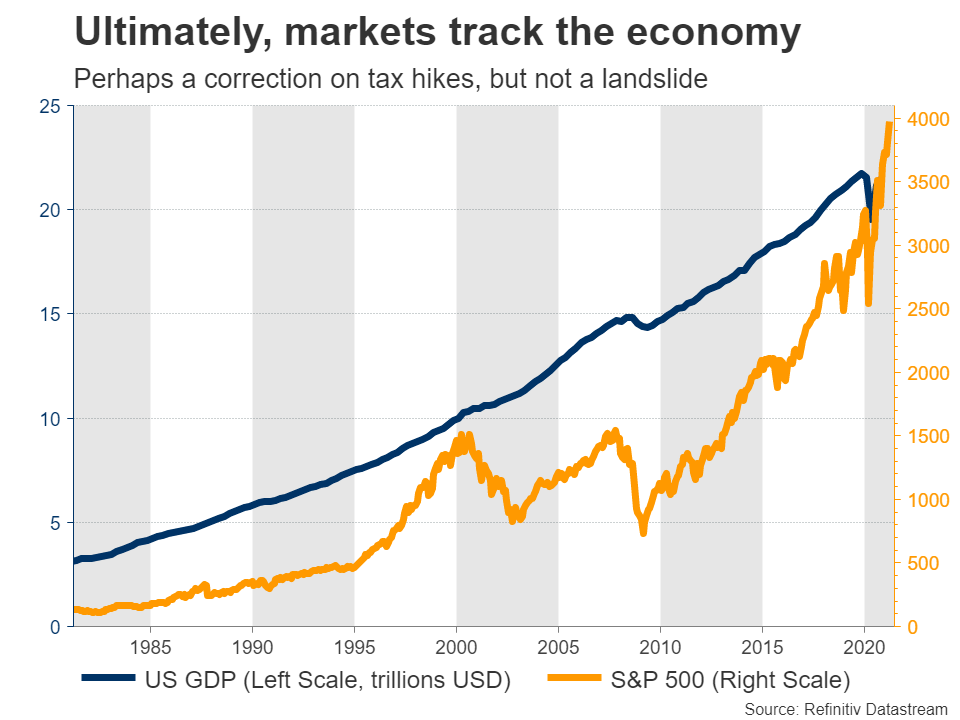 As for the dollar, if the US economy is doing that well, the Fed will most likely raise interest rates years before the European Central Bank or the Bank of Japan. Both of those economies are still struggling and are miles behind America in the immunization race.

Most probably. It won't be easy to get this bill through the Senate, but Biden commands enough support to do it. The Senate is split 50-50 between Democrats and Republicans, so he would need every single Democrat to go along and use the budget reconciliation process, like with the last relief package.

That said, it looks like he has the votes. Even the most 'fiscally conservative' Democrat senator – Joe Manchin – recently said he favors an “enormous” infrastructure package that would be paid in part by raising taxes. Of course, as with most bills of this size, the final version might be watered down substantially.

Ultimately, there is a lot of momentum and enthusiasm for such policies right now, with millions of people out of work and after decades of rising inequality. It is unlikely that any Democrat senator will dare break the party line and suffer a storm of political blowback.

View All
XM Research - 2 weeks ago