After nearly three years of being cut off from the rest of the world, China has finally lifted most of its strict COVID-related restrictions, with the latest development being the reopening of its borders on January 8. Since December, when the first reopening announcements were made, financial markets have periodically cheered the prospect of the reopening boosting global growth, while on other occasions, they reflected concerns about the spreading of new COVID variants to the rest of the world. So, how can the reopening of the world’s second largest economy affect this planet’s economy and how may financial markets respond?

Economic recovery is a given…

Combined with efforts to stabilize the property sector, the removal of COVID-related restrictions in December likely turned the switch for kickstarting the engines of the domestic economy, while the physical reconnection with the rest of the world at the turn of the year will certainly have significant implications on a global scale as well.

Many businesses are resuming operations, while consumption and investment are likely to shoot up as households have been massively saving over the past three years. Exporters of goods, and most importantly commodity exporters, may largely benefit as China is the world’s largest commodity consumer, while supply chain pressures may ease further as China supplies 15% of the world’s goods exports. Destinations preferred by Chinese tourists will also thrive, with the surge in bookings offering concrete evidence that spending by Chinese tourists, which in 2019 amounted to $255bn, will strongly recover. 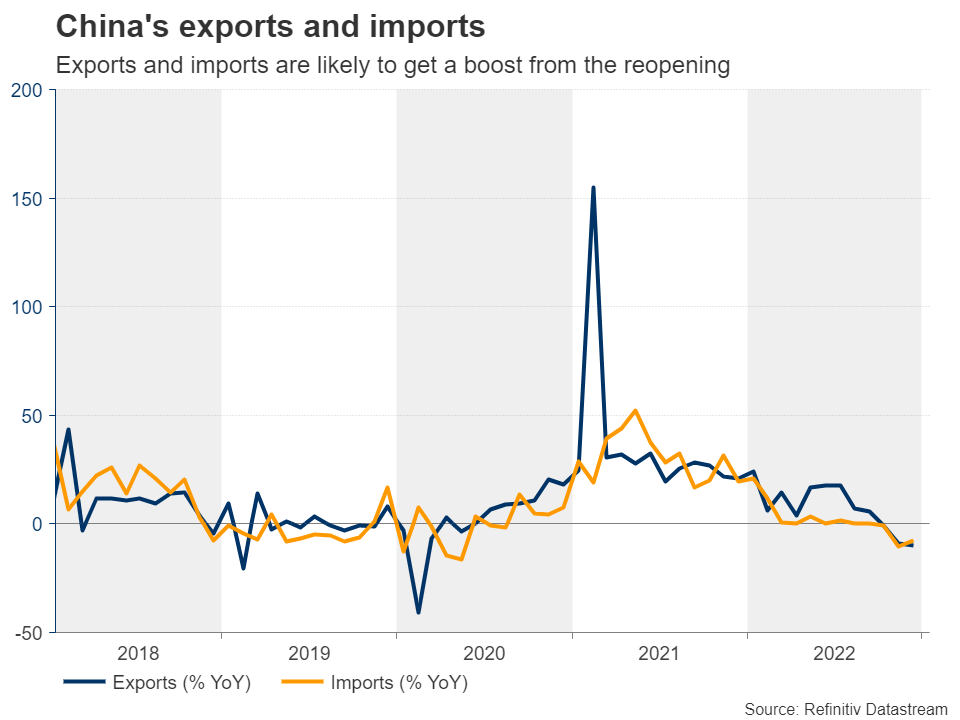 …but will it be a slow one?

Having said all that though, the loosening of strict COVID-related curbs has also resulted in surging infections in several districts, with the media talking about millions of estimated daily cases and around 60k deaths since China’s policy U-turn. Accelerating infections may delay a return to full potential due to distortions like labor shortages, while spreading new variants outside China may disrupt economic activity in the rest of the world as well. Therefore, the recovery may not be as fast and smooth as initially estimated by the markets.

Data for Q4 revealed that the Chinese economy grew 2.9% y/y, the second weakest figure since 1976, but still better than the market’s 1.8% forecast. On top of that, retail sales and industrial production for December came in much better than expected, confirming the positive impact the loosening of the restrictions had during that month. With the nation opening its borders, numbers for the current quarter are likely to be much better, but the big question is: Will they meet market expectations? If not, another round of risk aversion could hit the markets and thereby, equities may drift further south. 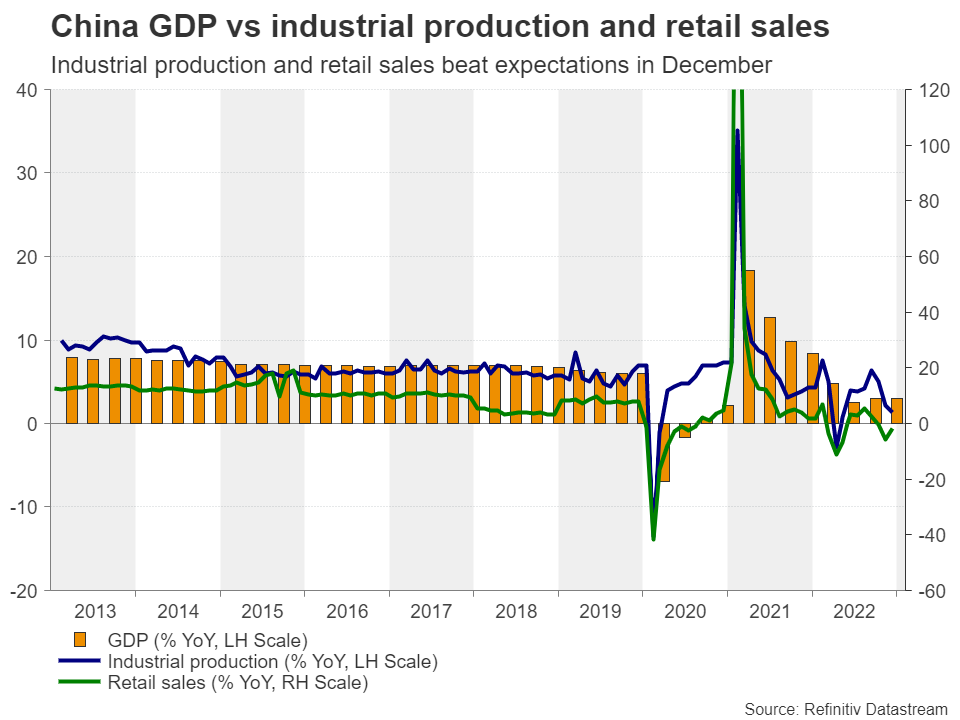 Alternatively, if the disruptions are not harmful enough to prevent the world’s second largest economy from rebounding strongly, a sudden increase in demand could lift energy and commodity prices. China is the world’s top crude importer while it also holds the first place in terms of imports of industrial metals, like copper and iron ore. Such development could well refuel inflation around the world, with Europe potentially facing the biggest trouble. Although the continent was able to build reserves by importing liquefied natural gas after Russia closed major natural gas pipelines, a potential spike in demand for LNG from China may result in intensifying competition and perhaps reinflate gas prices, leaving Europe with shortage-related problems next winter. 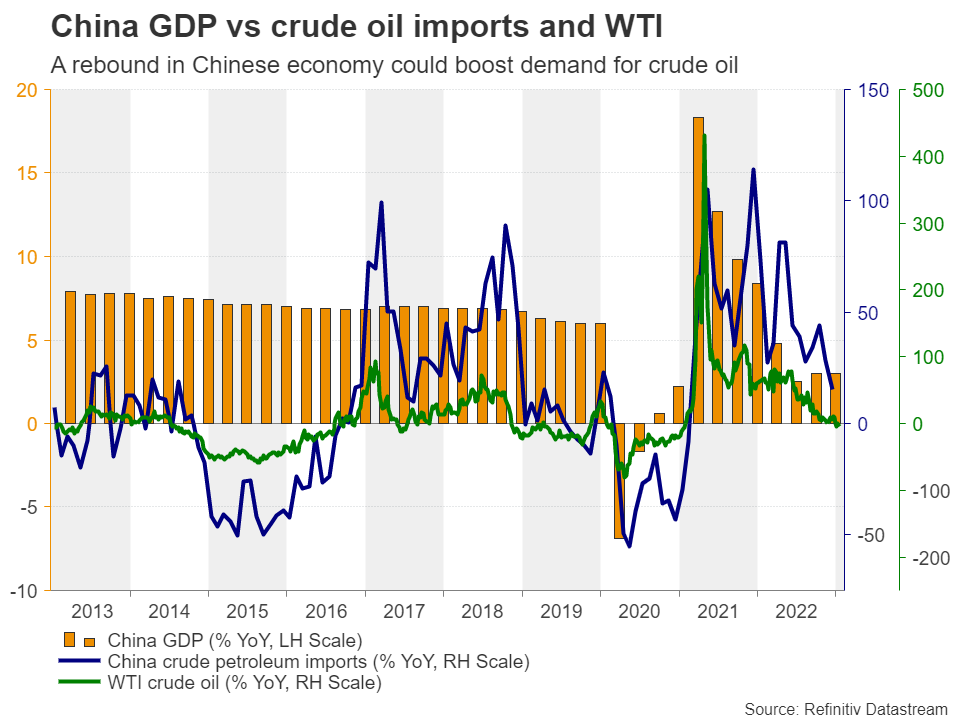 A rebound in inflation may ring alarm bells to the ears of major central banks, who may decide to step on the accelerator again and resume ultra-sized interest rate hikes. Higher interest rates for longer could tighten financial conditions further and thus, result in deeper wounds to economies that are already on the verge of recession. So, even if the financial world cheers the prospect of a fast economic recovery in China in the coming weeks and/or months, the positive effect is likely to stay limited and short lived. Stock indices are likely to tumble again should central banks accelerate and extend their tightening crusades as higher interest rates translate into lower present values for high-growth firms that are valued by discounting expected cash flows. 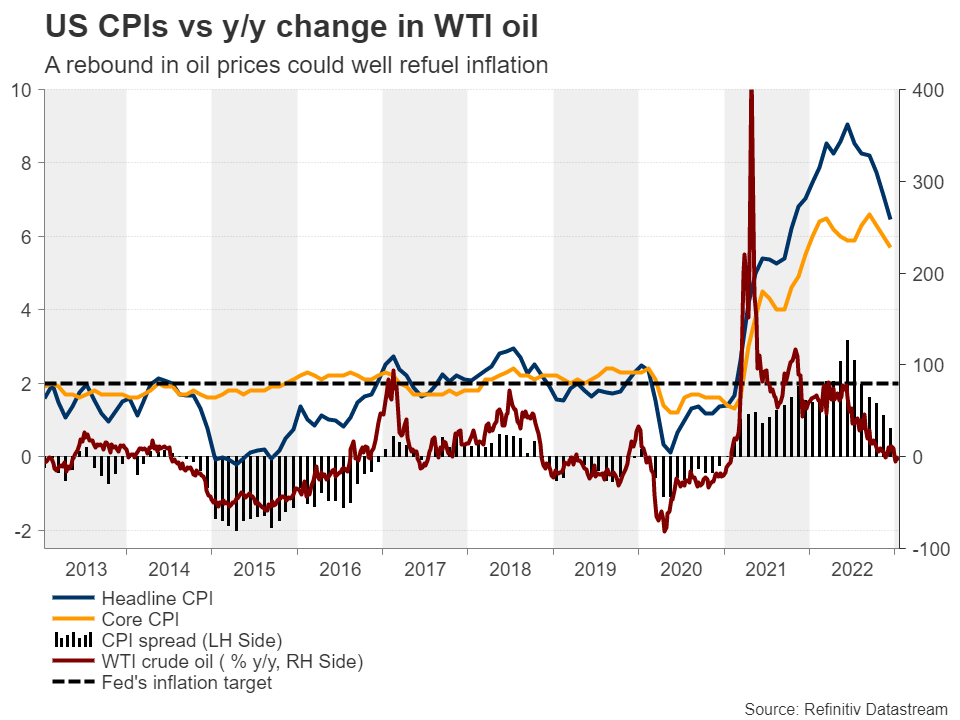 …and which is better for the global economy?Putting everything together, a delayed recovery of the Chinese economy may be a better outcome for the globe. It could be safer for China’s engines to return to full function in the second half, or towards the end of the year. By then, inflation may be much lower than current levels, especially with the war-related rally in oil and gas prices getting out of the year-on-year calculation from March onwards. As such, any boost in demand is likely to be healthier because even if inflation rebounds somewhat, as long as it is closer to target levels, central banks may have the luxury to stay on hold rather than being forced to return to ultra-sized interest rate hikes.