Alibaba is set to announce its fourth quarter financial results for the 2022 fiscal year on Thursday. The company’s shares have been plunging since early 2021 as the online retail behemoth was caught in the middle of a major regulatory crackdown on multiple sectors of the Chinese economy. To make matters worse, the upcoming earnings report is expected to indicate a deterioration in the firm’s financials due to the renewed round of Covid-19 restrictions in China that appear to have severely impacted its e-commerce business. Nevertheless, the consensus recommendation from Refinitiv analysts is ‘buy’, suggesting solid growth prospects for the firm.

China’s retail giants have seen their earnings estimates for Q1 getting slashed amid the government’s pursuit of zero-Covid strategy, which has slowed down manufacturing production and deteriorated supply chain disruptions. In turn, these developments have been constantly increasing fears over a slowdown in growth alongside discouraging consumer spending.

This latest development is added to a raft of existing challenges that most major Chinese companies have been grappling with, including a long-lasting regulatory assault by the government and the global monetary tightening, which has been luring capital away from risky assets. Meanwhile, the effect of the Chinese government’s latest stimulus package has proved non-existent as April’s retail sales slumped 2.5% month-on-month, marking an annual decrease of 6%. 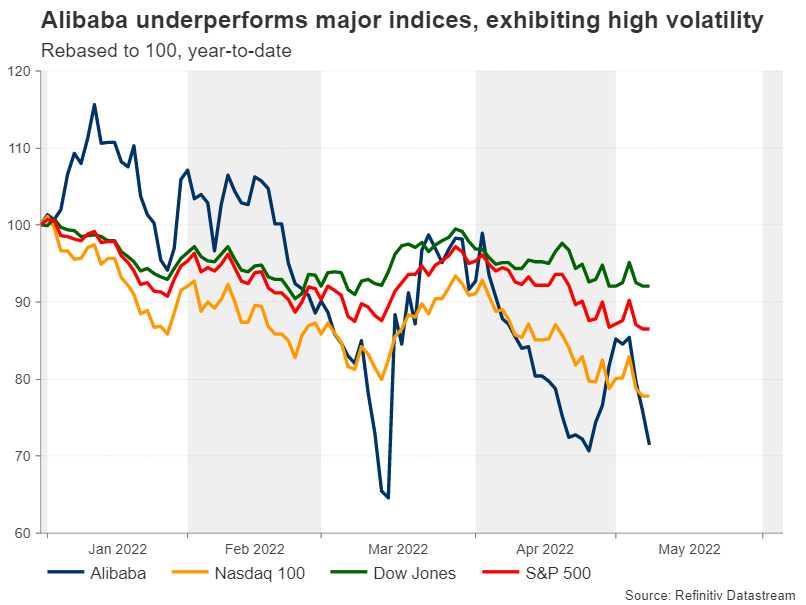 The ongoing war is also exacerbating major Chinese enterprises’ outlook. China remains an ally of Russia, which could have potentially tempered US investors’ demand for Alibaba's stock, even if it retains substantial growth prospects. The war in Ukraine has also heightened the significance of geopolitical factors for investors, with some becoming wary of the economic and financial consequences of possible increased tension between China and the West in the future. Furthermore, the American regulators have recently added JD.com to the provisional list of companies that may be removed from the American exchange if they fail to adhere to the rules regarding foreign companies' operating framework. Therefore, the fear of a potential delisting could also be partly responsible for Alibaba’s recent underperformance.

Idiosyncratic risks on the table

Alibaba has been adversely impacted by the cloudy Chinese macro environment and the long-lasting regulatory woes, which have enabled its competitors to gain part of its market share. Additionally, the recent lockdown has applied upward pressure to its operational costs, making the firm unable to keep its prices as low as its major US rivals. In turn, lower profit margins lead to decreasing net earnings that incentivise investors to steer towards more profitable companies.

Aside from that, in April, Warren Buffett's partner Charlie Munger cut his Alibaba stake by 50%, after building up the position for over a year. Following that news, Alibaba's share price experienced a sharp decline, with investors attributing this move to company-specific jitters.

In March, Alibaba revealed that it plans to boost its share repurchase program from $10 to $25 billion in an effort to support its collapsing share price, which was mainly attributed to external repercussions.

In contrast to most American firms that have been buying back their stocks at significantly elevated prices, Alibaba has been trading at relatively cheap valuations as a result of the continuous sell-off. Hence, the recently announced buyback program could prove beneficial for long-term investors that plan to enter in these low-price levels.

Mixed financial figures are expected for Alibaba as the zero-Covid policy imposed in China appears to have largely weighed on consumer spending. The retail behemoth is expected to post revenue of $199 billion for the fourth quarter, according to consensus estimates by Refinitiv IBES, which would represent a year-on-year growth of 6% but an 18% drop from the last quarter. Additionally, earnings per share (EPS) are estimated to decrease from $16.87 in the previous quarter to $7.29, marking a 29% decline on an annual basis.

Although Alibaba realized huge gains after the Covid-19 pandemic outbreak, this lockdown appears to have an adverse impact on the firm as it is also facing tough challenges because of the current uncertain macroeconomic outlook of the Chinese economy. The firm is currently undervalued with a trailing 12-month price to earnings (P/E) ratio of 11.1 (as of May 11, 2022), which is lower than its sector’s average of 27.7. Moreover, its forward 12-month P/E ratio is currently at 10.6, with most of its major competitors reporting a higher figure. 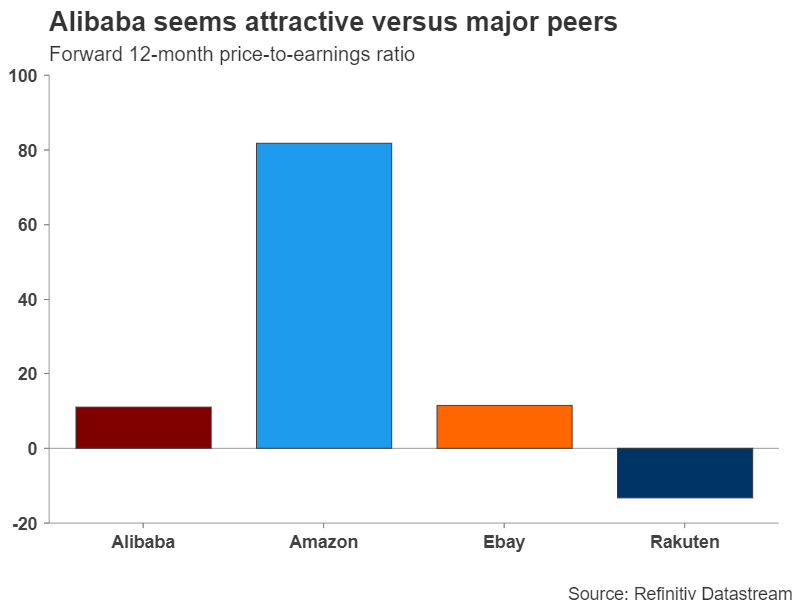 Overall, these indications could also suggest that due to the persistent sell-off, Alibaba’s share price has reached ‘value’ territory. Therefore, the firm’s attractive valuation alongside its significant growth prospects could skew long-term investors’ risk-reward ratio to the upside, given that Alibaba would manage to overcome its short-term headwinds.

Taking a technical look at Alibaba, a negative long-term outlook can be observed as the share price has been losing ground since the beginning of 2021. Even though the firm has been posting solid earnings figures in recent quarters, its stock price has failed to halt the decline, indicating that investors are more concerned about the broader macro risks of the Chinese economy.

Nevertheless, in case of stronger-than-expected financial results, the stock price could test its recent resistance barrier of $102. Should buying interest intensify further, then the next obstacle could be met at $124.

On the other hand, if earnings disappoint, initial support may be found near the recent low of $81.5, where a potential violation would turn the focus towards the 2022 low of $73.