Google’s parent Alphabet is set to unveil its financial figures for the first quarter of 2022 on Tuesday, April 26, after Wall Street’s closing bell. The third most valuable publicly traded company in the US is expected to record a double-digit year-over-year revenue growth but experience a quarterly decline in both revenue and earnings figures. In the current unfavorable environment of rising interest rates, signs of a slowdown in economic growth could spell greater trouble for tech stocks. However, Alphabet’s consensus recommendation from Refinitiv analysts is ‘buy’, indicating bright growth prospects for the company.

The Fed’s recently launched rate hike cycle to counter inflationary pressures has triggered a broader sell-off in tech stocks. It is common knowledge that rising interest rates directly reduce the value of the companies’ future cash flows, which is an extremely negative development for tech stocks as their performance heavily relies on their growth prospects. Furthermore, higher interest rates could discourage borrowing by firms, reducing their disposable funds for investment and development spending.

Apart from the broader gloomy environment, Alphabet also carries some idiosyncratic risks. In 2022, Alphabet launched a fresh appeal to overturn the $2.8 billion fine imposed by the EU's General Court for antitrust infractions. Additionally, the US Justice Department and 11 states filed a lawsuit in 2020 alleging that Alphabet used its market power to fend off rivals; the trial is expected to take place in 2023. 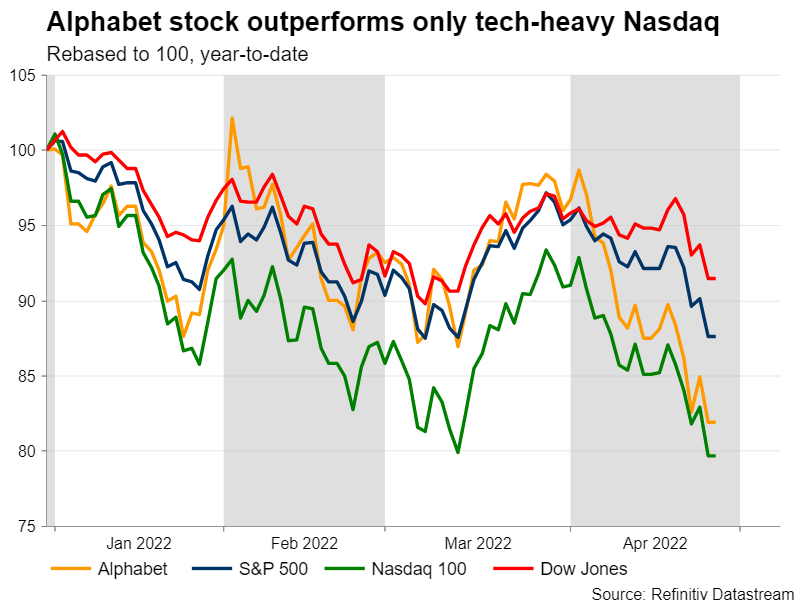 Advertisement remains the name of the game

Alphabet generates almost 80% of its income from advertising on its Google and YouTube platforms. Although there has been a slowdown in spending on some social media platforms like Meta, Alphabet has managed to navigate through these headwinds due to its diversified nature, which also enabled it to stay insulated from the recent restrictions in privacy policy settings introduced by Apple.

On the other hand, as fears over a possible recession are increasing, many businesses might scale down their advertisement spending, leading to a loss of income for the tech behemoth. Additionally, the Russian invasion of Ukraine could pose a significant threat to Google’s ad income, but the company currently estimates that its direct impact in Russia accounts only for 0.5% of its total revenue.

Overall, there is a broader rotation in ad spending from traditional media to the internet, which constitutes a key catalyst for Alphabet’s future growth. Therefore, as digital ads and e-commerce trends continue to pick up, Alphabet seems uniquely positioned to keep capturing the lion’s share of the global advertising market.

Google’s Cloud Platform has been making substantial progress lately, expanding at an impressive rate despite the intense competition and its small stake in the industry. Although Alphabet’s cloud segment recorded revenue growth of 44.6% in annual terms in the previous quarter, it still remains unprofitable. Moving forward, the main challenge for the firm is to improve its cloud venture profitability, while also gaining market share from its well-established competitors, Amazon Web Services and Microsoft Azure.

Revenue and earnings to decrease

Mixed financial figures are expected for Alphabet. The tech giant is expected to post revenue of $68 billion for the fourth quarter, according to consensus estimates by Refinitiv IBES, which would represent a year-on-year growth of 23% but a 10% decline from the previous quarter. Additionally, earnings per share (EPS) are estimated to decrease from $30.70 in the previous quarter to $26.10, with the figure also decreasing 0.7% on an annual basis.

Is Alphabet a buy ahead of its stock split?

Alphabet has already announced that it is going to proceed with a 20:1 stock split in July to increase liquidity and enable retail investors to obtain nominal shares. Usually, companies that announce splits have experienced sustained market outperformance and try to benefit from the immediate positive momentum as most of the times investors want to increase their exposure after the split is completed.

Moreover, based on Bloomberg data, S&P 500 companies that executed a stock split have on average outperformed the index. Therefore, despite the recent weakness, this development could provide some additional strength to the tech giant’s share price.

One of the cheapest valuations in the tech gang

On the bright side, Alphabet’s valuation could be considered attractive for many investors, who bet on its growth prospects but also waited for a potential downside correction to step into the market. The 12-month forward price-to-earnings ratio, which denotes the dollar amount someone would need to invest to receive back one dollar in annual earnings, currently stands at 20.1x, with tech-heavy Nasdaq posting a significantly higher 27.0x figure. 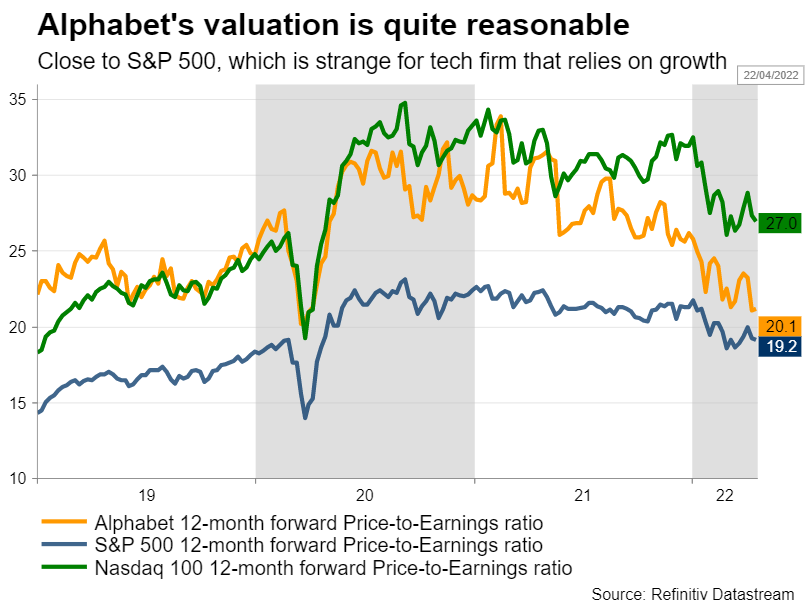 After a solid 2021, and an even stronger start in 2022, which led to a new all-time high, Alphabet’s stock price is currently trading at almost 18% below its peak.

A positive surprise in the upcoming earnings report could propel the share price higher towards the $2,630 barrier, with another break opening the door towards $2,875.

On the downside, further downside pressure would send the price to test the 2022 low of $2,490, a violation of which could shift attention to the $2,460 hurdle.