The Walt Disney Company will release its third quarter earnings results on Tuesday, November 8, after Wall Street's closing bell. The leading entertainment powerhouse is expected to post year-on-year revenue and earnings growth as Disney theme parks and movie theatres around the world have reached their pre-pandemic traffic levels despite some temporary headwinds. However, the real driver for markets will be the subscriber growth metrics of the firm’s streaming services, with Netflix’s better-than-expected subscriber figure in Q3 providing a positive early indication for Disney+.Stock price tumbles despite strong fundamentals

Disney’s diversification efforts have indeed materialised enabling it to perform well during different economic cycles. The success of its streaming business provided significant income streams when the company was forced to shut down its theme parks after the Covid-19 outbreak, whereas the strong rebound of its theatres and resorts has offset the post-pandemic slowdown of its media division. Although the firm’s core financial figures are continuously growing in the past few quarters, surprisingly the stock price has lost almost 35% since the start of the year. 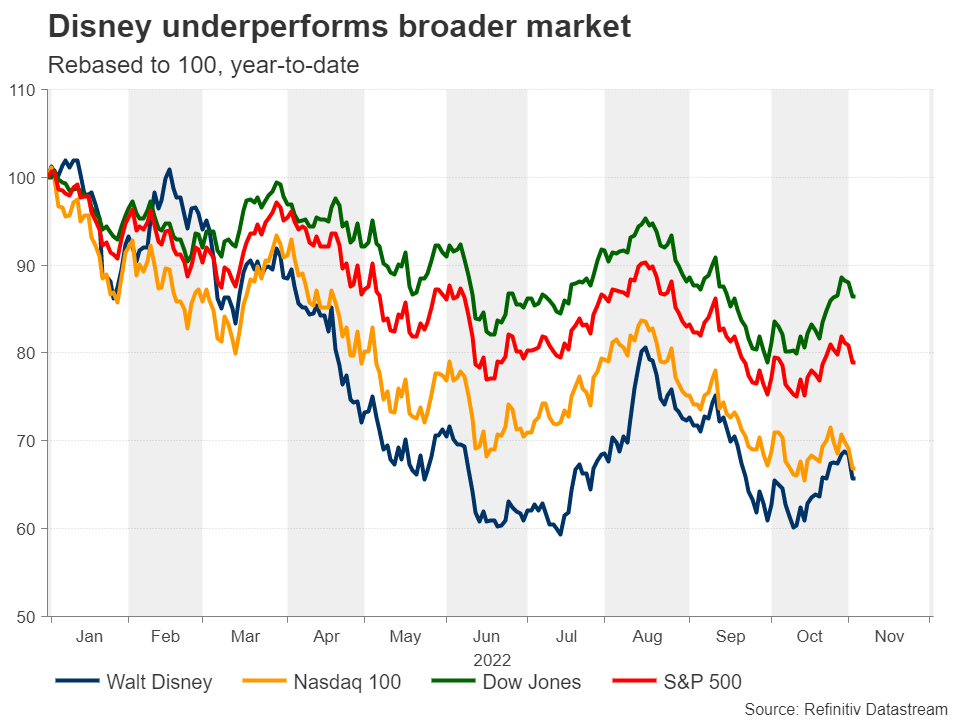 Most of this weakness is attributed to increasing market fears that the firm’s streaming segment will face significant difficulties to attract new subscribers in a period of reduced demand and intensifying competition. Moreover, in the upcoming months, consumers are likely to get more squeezed by the persistent inflationary pressures and the liquidity drain from central banks, which could curtail their spending on discretionary items like amusement parks and leisure trips.

The fact that Disney’s share price has fallen dramatically despite the rebound in its on-site facilities clearly indicates that markets seem to be more focused on the firm’s streaming segment performance. That being said, analysts are expecting 8.5 million net new subscriptions in the third quarter, with Netflix’s recent outperformance in this key metric hinting that a potential negative surprise could have a devastating outcome for Disney’s stock.

Apart from that, Meta’s and Alphabet’s earnings announcements triggered rising concerns that ad business will most likely suffer a slowdown in the months to come as recession fears loom.  If that scenario materialises, Disney is likely to receive a significant blow, considering that its ad revenue is already set to fall by 33% in Q3.

Disney’s attractions all around the world have been working in full gear since the global economic reopening, but headwinds keep piling up. In the September quarter, revenue generated from US theme parks is expected to experience a pullback due to the impact of Hurricane Ian. Moreover, a renewed phase of lockdowns in China forced the Shanghai Park to shut down, with more parks prone to closing as the Chinese government insists on its zero-Covid policies. Finally, the strengthening dollar continues to constantly devalue the income generated from theme parks overseas.

Disney is expected to report solid fundamentals as the traffic in its amusement parks and theatres has rebounded to pre-pandemic levels, while subscriptions for Disney+ are posting consecutive quarterly increases. The world's leading entertainment conglomerate is anticipated to post revenue of $21.24 billion for the third quarter, according to consensus estimates by Refinitiv IBES, which would represent a year-on-year growth of 14.64%. Additionally, earnings per share (EPS) are set to decrease from $1.09 in the previous quarter to $0.54, but jump 47% on an annual basis

Although Disney is anticipated to face macroeconomic risks due to the combination of monetary tightening and persistently high inflation, investors and markets appear confident that it can achieve its growth targets. This optimistic outlook is also reflected in its hefty forward price to earnings ratio of 19.0x, which is substantially higher than the consumer discretionary sector’s average of 9.1x. This number denotes the dollar amount someone would need to invest to receive back one dollar in annual earnings – the higher it is, the more 'expensive' the stock. 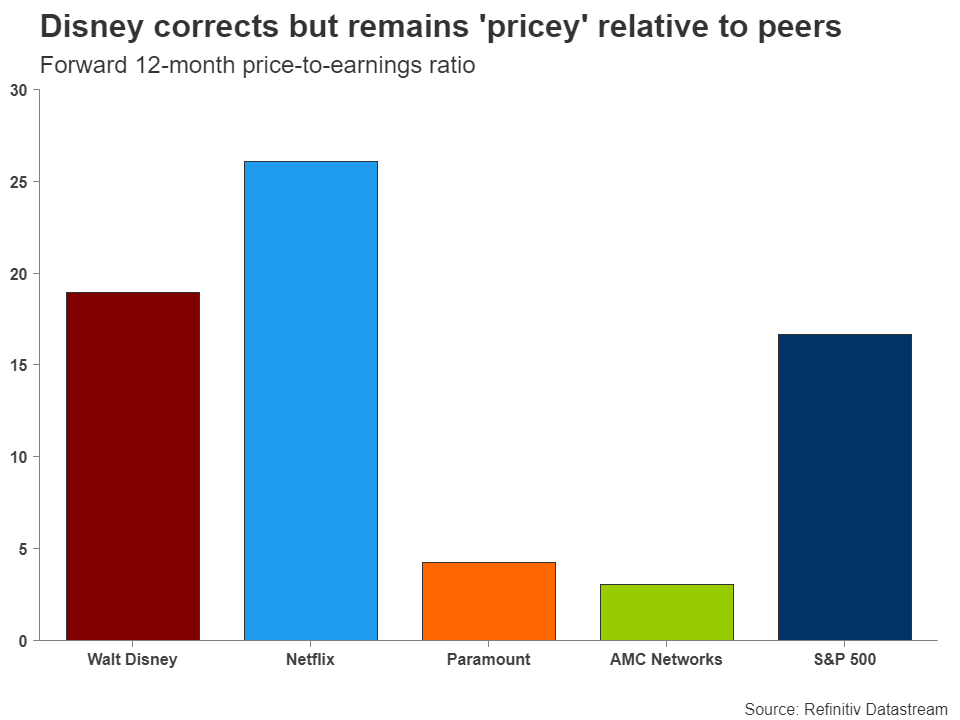 Disney's share price has been in a sustained downtrend since the beginning of the year, but lately it is exhibiting some signs of recovery. Even though the latest rebound faltered after Powell’s hawkish remarks, an impressive earnings card could alter the sentiment back to positive.

In the bullish scenario, solid financials could propel the price towards the recent high of $108.70 Successfully breaching this region, the price might then test the $117.50 barrier.