Exxon Mobil and Chevron are scheduled to report their third quarter earnings on Friday, October 28, before Wall Street’s opening bell. The energy behemoths are coming off historical record profits in the previous quarter, which are expected to experience a minor decline in Q3 as oil and natural gas prices have corrected moderately lower from their 2022 peaks. Considering that revenue streams are anticipated to remain robust, investors will shift their focus on whether rising costs and reducing demand due to increasing recession fears will dim forward guidance.

The energy sector has posted a remarkable surge in 2022, driven by multiple factors. At first, when the global economies emerged from the Covid-19 pandemic, constrained supply failed to cover rising demand as the pandemic-induced recession had forced oil producers to pump significantly fewer quantities. Moreover, the chronic under-investment in fossil fuels due to the global intensifying efforts for a quick transition towards clean energy, acted as a headwind on producers’ effort to effectively ramp up supply, inducing upward pressures on oil prices.

To make matters worse, the Russian invasion of Ukraine and the consequent sanctions from Western allies on Russian energy exports not only triggered a massive spike in energy commodity prices but have also kept them elevated until now. In addition, earlier in October, the OPEC+ cartel agreed to cut oil production by 2 million barrels a day, putting a tough floor to the declining prices. 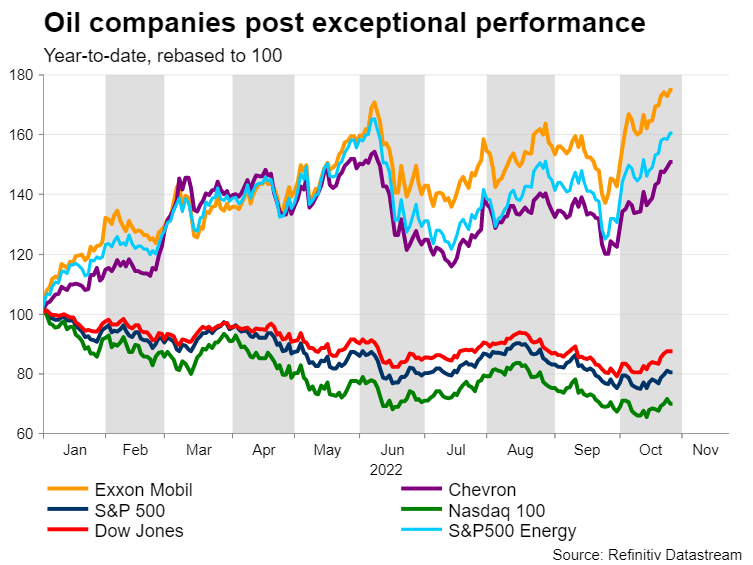 Summing up, all the above have acted as catalysts that boosted oil prices and maintained them at high levels despite the recent pullback, enabling the energy sector to be the best-performing sector globally.

As the possibility of an upcoming global economic recession that would shutter oil demand is increasing, energy companies are at a crucial crossroad. Will they adhere to Biden’s Administration request for more production and lower consumer cost or align with OPEC’s intentions to keep production tight. At the same time, shareholders keep pressuring for higher payouts as they fear that the blockbuster performance will be short-lived, while the US government urges energy companies to use their accumulated dry powder for investment purposes.

Exxon Mobil and Chevron are projected to exhibit record revenue figures, albeit profits will probably suffer a minor dent due to declining oil and natural gas prices. The former is expected to post revenue of $119.89 billion for the third quarter, according to consensus estimates by Refinitiv IBES, which would represent a massive year-on-year growth of 62.49%. Earnings per share (EPS) are estimated to reach $3.76, marking an increase of 137.8% on an annual basis but a 9.1% decrease versus the previous quarter.

For Chevron, forecasts by Refinitiv analysts suggest that EPS is anticipated to dip from $5.82 in the last quarter to $4.81, which would however translate to an annual jump of 62.60%. Revenue is projected at $59.20 billion, a substantial increase of 32.46% over the same period last year.

Up until now, energy firms have used their rising operating income to pay out debt accumulated during the pandemic. Nonetheless, the big question that lies ahead is in which growth levers will all these excess cash flows  be invested and how much will be directed back to shareholders.

Even though both Exxon Mobil and Chevron have been massively outperforming markets thanks to their fundamental strength, their valuations remain substantially low, indicating that investors are not betting on their longer-term prospects. The 12-month forward price-to-earnings ratios, which denote the dollar amount someone would need to invest to receive back one dollar in annual earnings, currently stand at 9.5x and 10.4x respectively. These ratios are not only way lower than the tech-heavy Nasdaq’s average multiple of 22.4x but also stand below the S&P 500’s 15.9x. 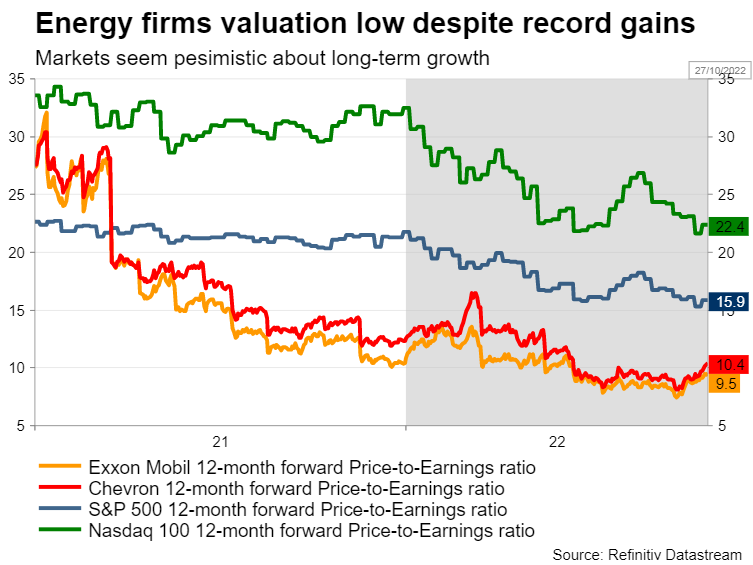 There are many reasons why investors remain cautious on whether oil companies have more upside potential. Geopolitical flare-ups, OPEC+ production cuts and supply constraints might keep the price of oil elevated during the winter, further extending the sector’s outperformance. However, as soon as the supply-demand imbalance is resolved and energy prices come back down to earth, energy companies’ shares will probably experience a significant pullback.

In addition, most energy companies are currently trading near all-time high levels without any material changes in their business operations such as new discoveries or massive technological innovations that could justify this massive surge. Therefore, the sustainable growth of the sector lies in how efficiently energy corporations will invest their current cash surplus to generate energy from renewable sources.

Will Chevron stock revisit its highs?

The long-lasting energy crisis has triggered a rally in Chevron’s stock price, which has reached a fresh all-time high in 2022. Although the share price experienced a partial downside correction, it appears to be regaining ground ahead of Q3 earnings, threatening its previous historical high.

Hence, if there is a positive surprise in the upcoming earnings, the stock price could move higher to test the all-time peak of $182.40 before flying to fresh highs.

On the flipside, bearish actions could encounter initial support at the $167.00 hurdle, a violation of which will shift the attention to the September low of $141.00.