Exxon Mobil Corporation is set to unveil its third-quarter financial results before the opening bell on Friday. The oil behemoth is expected to post solid figures as commodity prices have skyrocketed in the last quarter. Moreover, the company will measure up to a rather weak annual comparison when the energy sector was just coming out of the pandemic-induced demand and price destruction. Although this quarter promises a sequential improvement, the consensus recommendation from Refinitiv analysts is ‘hold’, indicating moderate growth prospects for the firm.Energy giants thrive as power crisis intensifies

Currently, the global economy is picking up again, significantly increasing demand for oil and natural gas. However, investment in new capacity isn't meeting this renewed demand, as companies have been hesitant to put money into fossil fuels, given the global push for green energy. Therefore, it is becoming obvious that the energy crisis will be longer-lasting, with oil and natural gas prices remaining elevated for a prolonged duration, while the upside potential seems huge as demand will continue to outpace supply on a global level.

Exxon Mobil projects that operating results from the oil and liquids businesses will improve by $200 million compared to the previous quarter thanks to an uptick in oil prices. Moreover, the rally in natural gas prices is likely to have contributed another $500 million to $900 million to its upstream business profits. In addition, the firm plans to reduce the cost of pumping oil in the Permian Basin to about $15 a barrel, a level only seen in the oil fields of the Middle East. Hence, the markets are betting on a further upside in Q4 for energy giants, as oil and gas continue to surge amid slashing costs and capital expenditure. 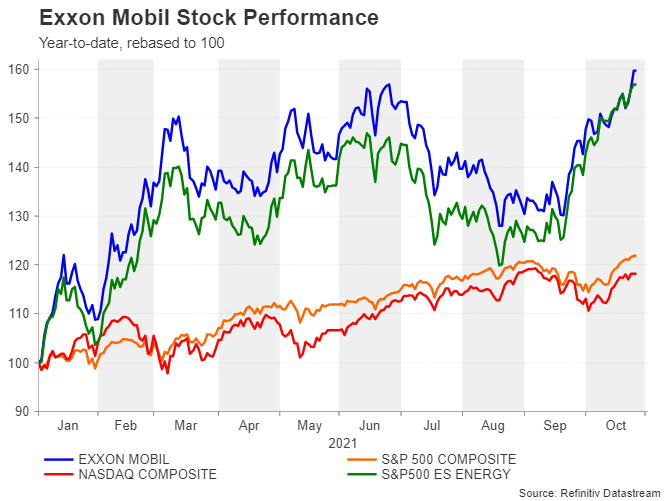 Solid financial figures are expected for Exxon Mobil due to the current favoring global economic environment. The energy giant is expected to post revenue of $76.33 billion for the third quarter, according to consensus estimates by Refinitiv IBES, which would represent a year-on-year growth of 65.23%. Earnings per share (EPS) are estimated to reach $1.56, representing a massive increase of 960% on annual basis and a 41.8% increase versus the previous quarter. Net income is forecast to rise to $6.623 billion.

Although Exxon Mobil has realized huge gains after the global economic reopening, which were also turbocharged by the surging oil and gas prices, the company remains overvalued relative to its competitors. The company currently has a trailing 12-month price to earnings (P/E) ratio of 16.7 (as of October 26, 2021), which is substantially higher than the oil and gas sector’s average of -35.6. However, this fact suggests that the company has recovered faster than most of its industry rivals. Furthermore, its forward 12-month P/E ratio is currently at 11.6, with most of its major competitors having a higher figure, posting an industry average of 18.7. Hence, this might indicate increased future earnings potential for the company, which have not been fully priced in by the markets yet. On the other hand, a low future P/E ratio might also signal pessimistic growth prospects for the firm. 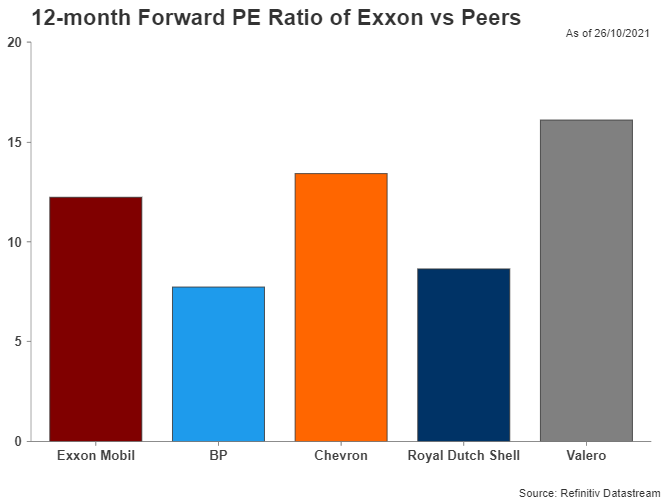 The ongoing energy crisis has triggered a rally in Exxon Mobil’s stock price, which has almost reached December 2019 levels. The share has been posting consecutive positive sessions prior to the earnings announcement, as surging oil and gas prices have boosted expectations for the firm’s prospects. A solid earnings report could propel the price to a new 23-month high, where initial resistance could be met at the December 2019 resistance region of $67.5. If the price continues its ascent, then the next target for the bulls might be the $70 psychological mark. On the flipside, should the earnings disappoint, immediate support may be found near the recent low of $62.3, where a violation would turn the focus towards the 50-day moving average, currently at $57.92.

Overall, analysts are holding on to their neutral view for Exxon Mobil, even though the company is expected to post strong growth figures. Despite the shift to green energy, the future of the sector seems bright. Nevertheless, analysts are worried about the firm’s underperformance relative to its competitors.