Major US equity indices slumped on Wednesday in the aftermath of the latest FOMC policy meeting, in which the Fed hiked its base interest rate by 75 basis points in line with market expectations and reiterated its commitment to get inflation under control. What attracted investors’ focus though was the Fed’s updated dot-plot as it now signals a more aggressive hiking pace and a higher terminal rate than the markets were projecting. What does that mean for stocks?No Fed pivot but maybe a pause
On Wednesday, the Fed proceeded with the widely expected third consecutive 75bps rate hike and provided insightful statements on its future policy moves. Specifically, the central bank revealed the updated version of its dot plot, which essentially indicates where interest rates might be in the coming years according to its members' projections. The latest version depicted the benchmark rate rising to 4.4% by year-end before peaking and staying at 4.6% till the end of 2023.

These interest rate levels are far above what markets were anticipating before the event, delivering a huge blow to investor sentiment and inflicting severe damage on risky assets. What’s more, the new dot plot does not entail a rate cut in 2023, hinting that tight monetary conditions could stick around for longer than expected. Therefore, persistently high interest rates will most likely weigh on stocks, especially on tech stocks as their discounted cash flows will remain under significant pressure.

Another notable development of the latest FOMC meeting was that for the first time Jerome Powell acknowledged that the possibilities of a soft landing are diminishing as a prolonged period of high interest rates could ease conditions in the jobs market and dip economic growth below acceptable levels. Therefore, considering that price stability remains the top priority, the Fed appears ready to cause significant collateral damage, even a recession, in the process of getting inflation under control. In such a scenario, the consequences for the stock market will be devastating.

Following those statements, the US Treasury yields spiked higher with the policy sensitive two-year note hovering at 15-year high levels around 4.13%, while the inversion between the two- and 10-year Treasury yields reached the deepest level in four decades. 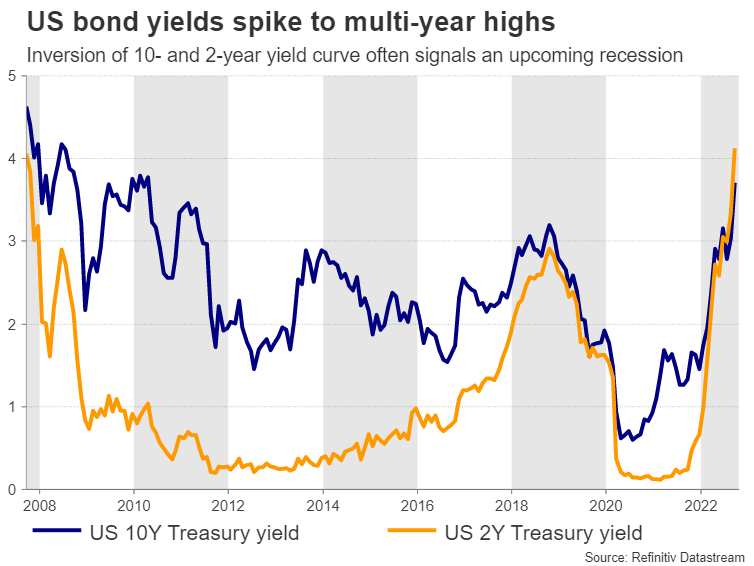 In addition, apart from hurting valuations and making borrowing to fund new investments unattractive, elevated interest rates are likely to extend the dollar’s outperformance. The US dollar index has spiked to fresh 20-year high levels, benefiting both from surging Treasury yields and safe haven flows. This trend will probably deteriorate US firms’ fundamentals, with exports becoming less competitive, weighing on sales in foreign markets.

Moreover, an extended period of tight economic conditions will most likely curtail domestic demand, adding more problems to the US firms’ weakening financial performance, which in turn might translate to drops in share prices.

Where could the Nasdaq bottom?

Nasdaq is a tech-heavy index, thus its performance is more sensitive to interest rate fluctuations relative to the other major US indices. Taking a technical look, we can see that the index has been trading deep into bear territory, but the latest developments could send it even lower.

Therefore, for traders who are seeking the next potential support region, the 200-week simple moving average, currently at 11,160 might be a good choice. Even lower, the index could encounter strong support around the 10,590 region, which is the 61.80% Fibonacci retracement of the 6,779-16,759 upleg , extending from the pandemic lows until the all-time high.