Google parent, Alphabet Inc, will report its third quarter earnings on Tuesday after the market close as its stock’s incredible post-pandemic rally takes a pause. Worries about ad revenue are weighing on the search giant’s share price but the Q3 earnings could ease those concerns as they will likely show that the cloud business is going from strength to strength. However, will there be enough positives in the earnings call to inject fresh life into the rally?Apple privacy policy hurts digital ad businesses

The digital advertising industry suffered a setback when Apple decided back in April to allow users on its iOS platform to opt out of app tracking of user data across different apps. Snapchat owner, Snap Inc, sparked a selloff in tech firms whose business model relies on digital ads for revenue after it missed its earnings estimates last week as the changes to Apple’s privacy policy limit its ability to offer targeted ads. Alphabet shares have tumbled about 5% in the aftermath, erasing some of the year-to-date gains.

Nevertheless, the stock is up more than 55% this year, which far outstrips the roughly 20% gains for the S&P 500 and Nasdaq 100. Optimism about Alphabets’ growing cloud segment is behind this monstrous rally and could again come to the rescue by lifting Q3 earnings. 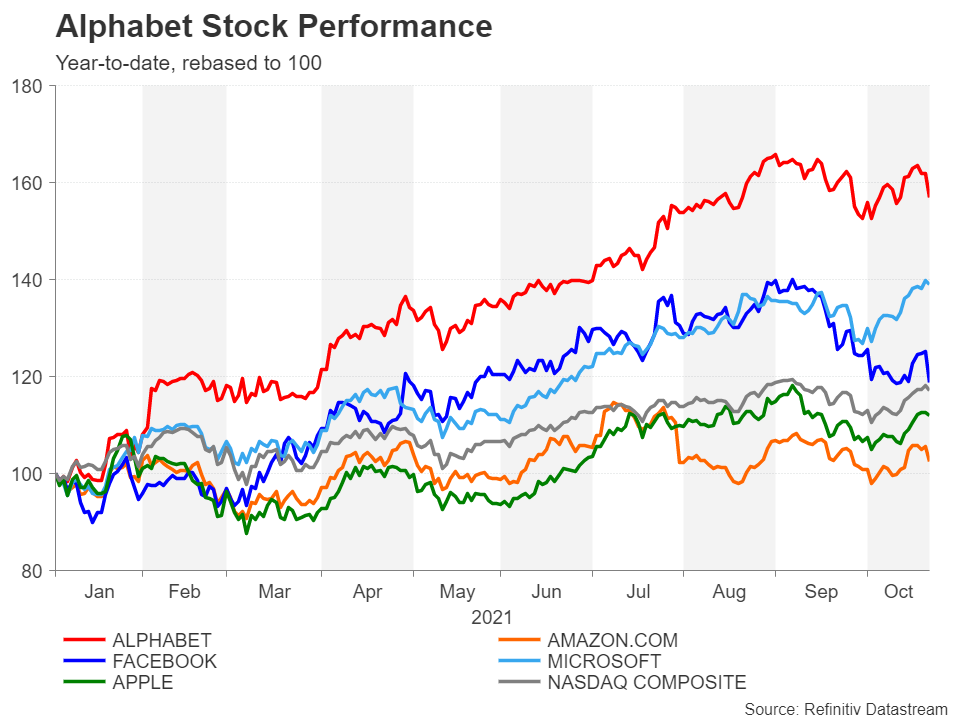 Google Cloud Platform has been making substantial inroads lately, expanding at an impressive rate despite the intense competition from the likes of Microsoft and Amazon.com. Whilst the broader boom in the cloud computing industry is certainly contributing to this growth, Alphabet has been investing heavily in advancing and diversifying its cloud offerings as well as establishing partnerships with companies such as AT&T and Cisco Systems on business solutions.

But Google Cloud isn’t the only unit that is doing well. The Company has also been focused on enhancing its array of other products and services and could enjoy a revenue boost from Google TV, YouTube, Waymo – its self-driving project, and the Google Nest smart home products, to mention a few.

As for its main business of Google Search and digital advertising in general, the Company is likely to suffer less than its rivals such as Facebook and Snap from Apple’s privacy changes. Alphabet’s continuous efforts to improve its search AI for better results and attract more traffic to the platform could counter any lost revenue from Apple devices, which it’s not very reliant on anyhow. The cyclical recovery in advertising as economies around the world reopen on the back of rising vaccinations should also keep the Apple-related losses to a minimum.

If consensus forecasts are to be believed, Alphabet is on track to post its fifth straight quarter of double-digit revenue growth. According to Refinitiv IBES estimates, the Company is expected to report advertising revenue of $51.09 billion and total revenue of $63.34 billion for the three months to September. These would represent year-on-year growth of 37.7% and 37.2%, respectively. 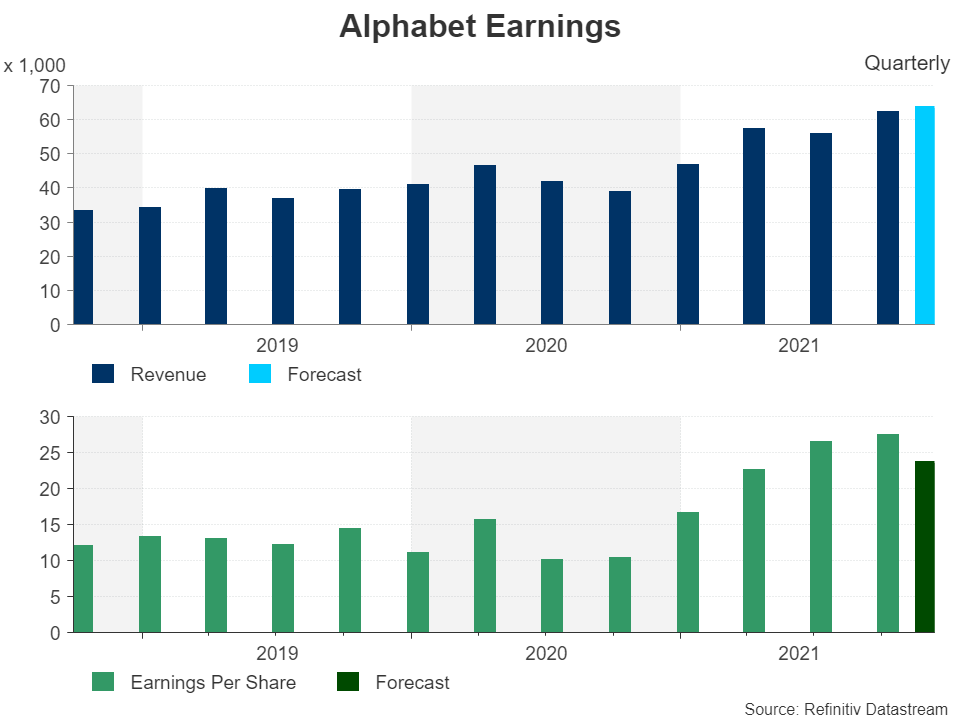 If the revenue numbers don’t disappoint, underscoring Google’s resilience to Apple’s privacy drive, the stock could recover towards the 50-day moving average just above the $2,800 level. Above this mark, the all-time high of 2,925.08 would become the focus, while the $3,000 level and the 161.8% Fibonacci extension of $3,113 from the September downtrend would be somewhat longer-term targets for the bulls.

However, if Alphabet’s earnings fall short of the estimates, particularly if there’s a big miss in advertising revenue, the price could fall back towards the October trough of $2,621 before testing the previously proven support and resistance region of $2,460.

Overvalued? No more than the rest of the tech clan

Analysts remain bullish on Alphabet stock, maintaining their ‘buy’ recommendation and raising their median price target to $3,200. The Company’s 12-month forward price/earnings (PE) ratio currently stands at 26.1, which is on par with Apple’s but below those of Amazon.com and Microsoft and slightly higher than Facebook’s. In another sign that the stock’s uptrend may have further to run is that Alphabet’s trailing PE is still below that of the Nasdaq Composite, even after this year’s huge gains. 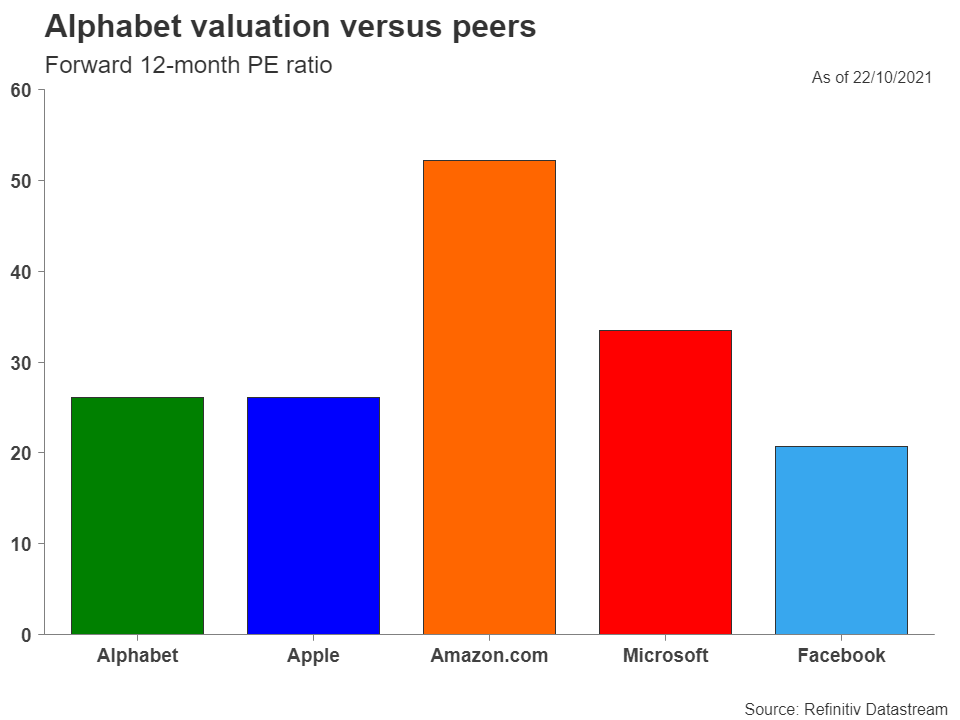 Some risks to watch

However, that doesn’t mean that the earnings announcement does not pose any significant downside risk. Aside from gauging the impact of Apple’s privacy overhaul on ad sales, investors will also be looking to see if the global supply-chain issues and soaring input costs are hamstringing businesses to the extent that they are cutting down on ad spending. Should Alphabet cite such an effect, whether in its latest results or in its guidance, the stock could take a hammering.

Antitrust issues are another headache for the Company. Although for the time being, this is only casting a small shadow over the long-term outlook, any update on ongoing lawsuits and investigations, as well as on what plans it may have to ease regulators’ concerns about anticompetitive practices, could spur a notable market reaction.