While the latest swift rise in global Covid cases sparked growth concerns last week, tech behemoths like Microsoft proved once again that nothing can stand in their way higher. Having pinned fresh record highs on Wall Street recently, the Redmond-based software giant is expected to justify its recent rally in stock markets when its Q4 earnings come out today after the closing bell. The consensus recommendation from Refinitiv analysts is buy.Market cap jumps to historic $2 trillion

Microsoft’s stock blossomed by 3.0% the past week to unlock a fresh all-time high at $289.99 but the bulk of gains is even greater for those who decided to buy the stock before the pandemic when the price was still fluctuating within the $159.00 area, while five years ago, the stock was stuck halfway below $100.

Its commitment to cloud services over the past decade proved to be a lifesaving change for the company during the pandemic’s indoor isolation as businesses suddenly shifted their activities to online channels, with the segment becoming the largest revenue contributor and the main catalyst for boosting the company’s market cap above $2 trillion last month. Microsoft is historically the second firm to break this key threshold after Apple.

According to forecasts, the cloud division continued to drive revenue growth in the last quarter of the 2021 financial year ending in June, but the two remaining segments of personal computing and productivity and business processes also contributed positively, pushing quarterly revenues up by $44.2bln (16.33% y/y) to a full amount of $166.2bln (16.24% y/y).

Earnings per share (EPS) could inch down to $1.92 from $1.95 previously but remain elevated by 31.23% when compared to the same period last year, increasing the total amount for the year to a new record of $7.80 versus $5.76 in 2020. Yet, given the non-stop positive surprises over the past four years, another upbeat EPS number cannot be excluded. 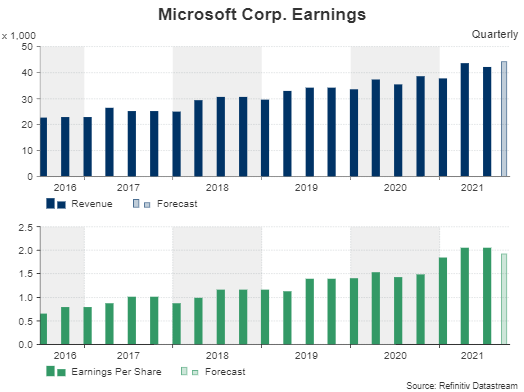 Investors, however, are already prepared for a blockbuster earnings period. What is unknown is how will Microsoft perform in the year ahead, and whether it will keep expanding exponentially, and that could be a critical question to make the stock move on Tuesday.

During the previous earnings call, Microsoft CEO Satya Nadella spoke highly of the company’s prospects, saying that “digital adoption curves aren't slowing down. They're accelerating, and it's just the beginning”.

Well, having engaged in heavy acquisition practises over the past few years despite the antitrust suits against it, Microsoft has expanded its services to a wide variety of investments, from the healthcare industry to the gaming world and the Pentagon’s communications. Hence, this risk management strategy could balance any negative returns and result in stable growth, keeping the company in competition with rivals such as Amazon and Google’s parent Alphabet.

Perhaps, performance issues when playing games raised some dissatisfaction with Xbox users recently, though thanks to Microsoft’s cloud concept, gamers will be able to stream in any desired location through Apple iOS mobile devices and Windows 10 PCs without a console or any expensive equipment.

Moreover, the new generation Windows 11 version previewed last week could be a fresh beginning for PCs as soon as in the final quarter of this year, including a better Xbox app integration, support for Android apps and a redesigned taskbar, which will replace Skype’s meet now button with an updated version of Microsoft teams.

As regards valuation metrics, which are flashing red for several tech companies, Microsoft is an advantageous position, trading at a forward P/E multiple of 33.78. slightly above the S&P 500’s average of 22.78. Besides, with several key financial companies including Morgan Stanley, Goldman Sachs and BNP Paribas raising their price target for Microsoft above $300, there is one more reason for traders to keep the stock in their portfolio.

What remains to be seen now is whether today’s earnings releases can sound optimistic enough to boost the stock price above the 290 psychological level and towards the crucial $300 mark or shift attention back to the support of the 20-day simple moving average at $278.68