Nvidia is set to unveil its earnings results for the third quarter on Wednesday, November 16, after Wall Street’s closing bell. The largest semiconductor firm by market capitalization is expected to record double-digit drops in both revenue and earnings per share as demand for chips has been constantly declining since the global economic reopening. Furthermore, Nvidia has been susceptible to the broader risks surrounding the tech sector this year, with its share price currently losing more than 45% in 2022. Hence, can the chipmaker turn things around by playing an impressive earnings card?

In 2022, the Fed’s ongoing rate hike cycle to counter inflation has triggered a broader sell-off in tech stocks. It is common knowledge that rising interest rates directly reduce the value of companies’ future cash flows, which is an extremely negative development for the tech sector as its performance heavily relies on growth prospects. 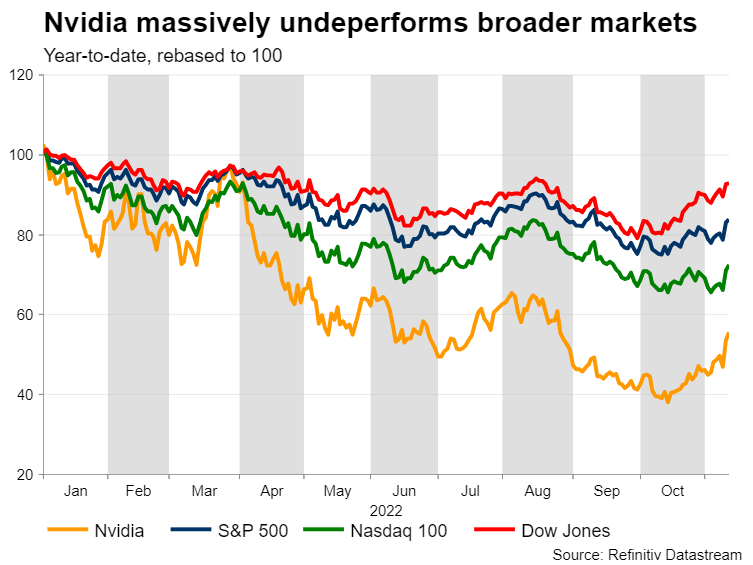 The vast majority of Nvidia’s income streams originate from chip sales. Therefore, the Santa Clara-based company has been largely affected by the massive slowdown in the tech sector as chips are essential inputs for the production of most electronic devices. In addition, semiconductors are also vital for high-tech industries such as cloud services, artificial intelligence and cryptocurrency mining.

Apart from the broader deteriorating macroeconomic environment, Nvidia is also facing a raft of sector-specific risks. At first, restrictions on chip sales to China imposed by the US government are anticipated to have significantly weighed on the firm’s Q3 financial performance.

Additionally, Intel, AMD and other companies that depend on PC sales have reported significant drops in demand for their products in the latest quarter as global PC shipments have declined almost 15% on an annual basis, making it highly unlikely for Nvidia to dodge this bullet. Finally, the turmoil in crypto markets caused by FTX's collapse has steered many crypto miners away from the business, delivering a huge blow to the demand for semiconductors.

In response to the latest developments, the firm announced last week that it produced the A800 chip that adheres to the laws and limitations set by the US government, thus it will be the first US company to start reselling semiconductors to China. Nevertheless, the firm also stated that its production was very costly, and the plan could backfire if demand does not live up to expectations.

On another note, the firm is likely to benefit from its expanding data centre business, with major tech companies such as Meta and Apple announcing in their latest earnings calls that they plan to increase their spending in this field. Meanwhile, investors should also keep a close eye on the firm’s automotive segment, whose revenue is expected to jump 77% on an annual basis and extend its feat of four consecutive growing quarters.

Nvidia is going to measure up to a solid year-ago performance when revenue was surging due to pandemic repercussions, while cryptocurrency mining and blockchain technology had emerged as the next big things. The chipmaker is expected to post revenue of $5.7 billion, according to consensus estimates by Refinitiv IBES, which would produce a year-on-year decline of 18.7%. Earnings per share (EPS) are estimated at $0.69, representing a massive 40% drop compared to the same quarter a year ago.

From a valuation perspective, Nvidia has a hefty forward price-to-earnings ratio of 39.8, which denotes the dollar amount someone would need to invest to receive back one dollar in annual earnings. This figure is significantly higher than the semiconductor sector’s average of 13.9, which could be attributed to the competitive edge that the company currently holds by being the dominant force in the GPU space with almost 80% of the total market share. 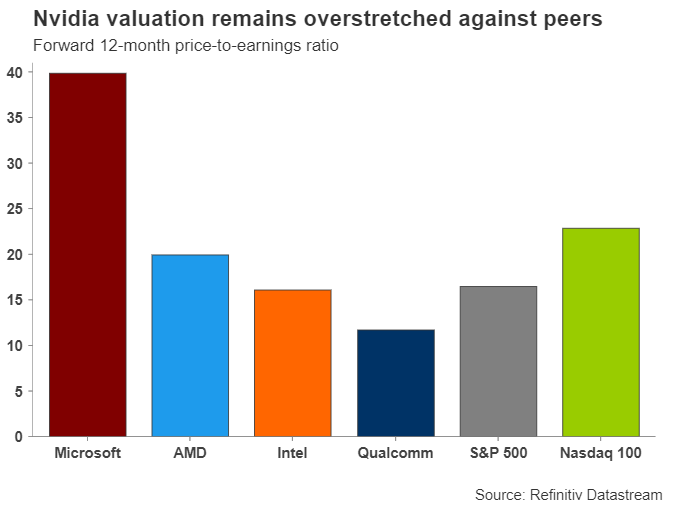 Even though Nvidia faces substantial short-term challenges, it’s difficult to argue that the leading tech firm does not retain significant long-term growth prospects. Since the pandemic outbreak, the number of devices people are using in their everyday life has increased massively, alongside the need for those electronic tools to be faster, smarter and address continuously increasing functions. Therefore, Nvidia’s future seems bright as semiconductor chips are necessary for both the production and function of those gadgets.

Despite losing more than 70% percent of its value since the beginning of the year, Nvidia’s stock has managed to post a moderate rebound and recoup some losses.

Hence, if Q3 earnings reveal signs of fundamental strength, the price could ascend higher towards the inside swing low of $167.20. Conquering this barricade, the bulls could then aim for the crucial $192.70 peak.

On the flipside, disappointing financial results may send the price to test its recent support region of $131.00, which overlaps with its 50-day simple moving average (SMA). A violation of the latter would set the stage for the 2022 low of $108.00.