The Dallas-based, Southwest Airlines Co, will unveil its earnings results for the third quarter on Thursday before the market open. The company has beaten its earnings forecasts three times over the past four quarters. Despite the 9.6% increase in its stock price since the beginning of the year, Southwest shares have underperformed both the S&P 500 and the US Global Jets ETF that tracks the air travel industry. The underperformance can be attributed to worker shortages and growing logistics problems faced by the company.

Airline companies on the ropes

Despite the continuous improvement on the Covid-19 front, the traveling sector still lags behind the ongoing recovery process. Fears about potential future mutations that could spark further outbreaks, together with persistent industry-wide disruptions, are weighing heavily on the already beaten up airline sector. Moreover, the shift into a more digitally centered work approach, which is likely to become permanent, could strip the sector from the large volume and high-margin segment of business travelers. 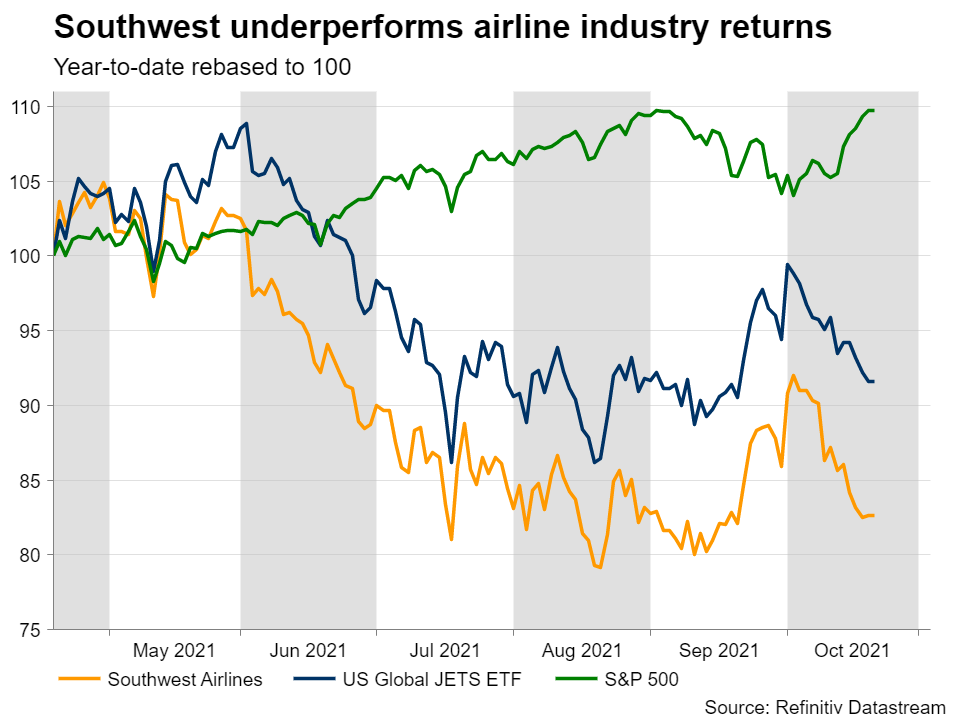 Another setback to the airline industry’s slow recovery is the ongoing surge in jet fuel prices, which has doubled over the past year to almost $750 per metric tonne according to data from the International Air Transport Association and Platts. Airlines would typically try to pass rising costs on passengers by raising ticket prices. However, passenger numbers are well below normal and carriers are currently trying to stimulate the market by offering lower fares.

The company mostly operates within the US, avoiding the much higher uncertainty weighing on its peers with significant international activities because of the pandemic. The recent spike in fuel prices is likely to put pressure on the company’s ability to generate positive earnings. However, Southwest is less exposed to jet fuel price volatility due to the high number of derivative contracts it currently holds on WTI and Brent crude oil, valued at $503 million.

In the midst of the Covid-19 crisis, Southwest increased its aircraft fleet, taking advantage of its strong balance sheet to expand its routes and services, aiming to become better-positioned for the aftermath of the crisis. Furthermore, the Dallas-based airline has also come into an agreement with Boeing to renew its current fleet with up to 660 new 737 MAX 7 and MAX 8 aircrafts by 2031. 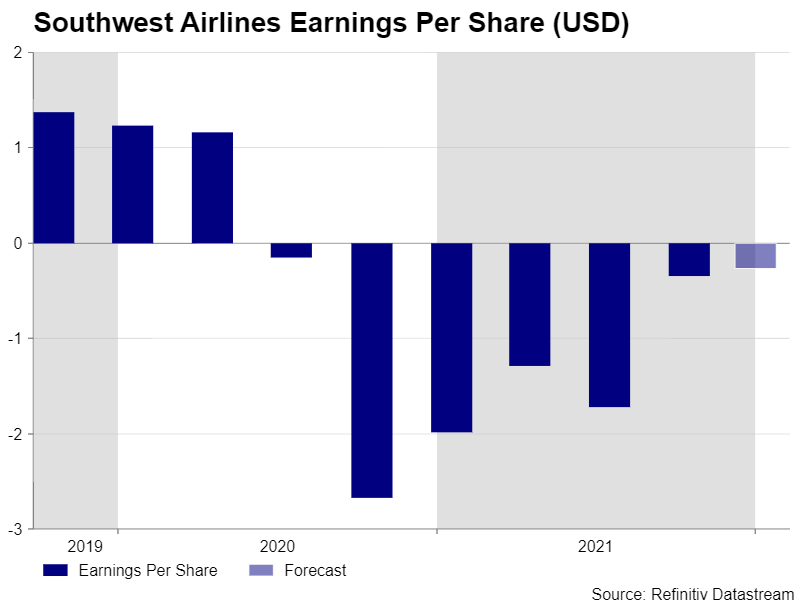 However, by investing more offensively than its peers, the company appears to have spread itself a little bit too thin, which in combination with external factors has led to logistics problems that caused the cancellation of over 2,200 flights during the Columbus day weekend. To meet its current schedule, Southwest aims to recruit 13,000 employees amid a tight labour market. The inability to attract talent could lead to further flight cancellations as well as burden the airline with higher costs, challenging its growth prospects.

According to Refinitiv estimates, analysts target $4.59 billion revenue and $-0.27 earnings per share (EPS) for the third quarter, marking a 156% and 86.4% year-over-year growth, respectively. Moreover, investors will be looking into industry specific metrics such as the available seat miles, which measures the company’s passenger carrying capacity, expected to increase by 47.2% year-over-year. 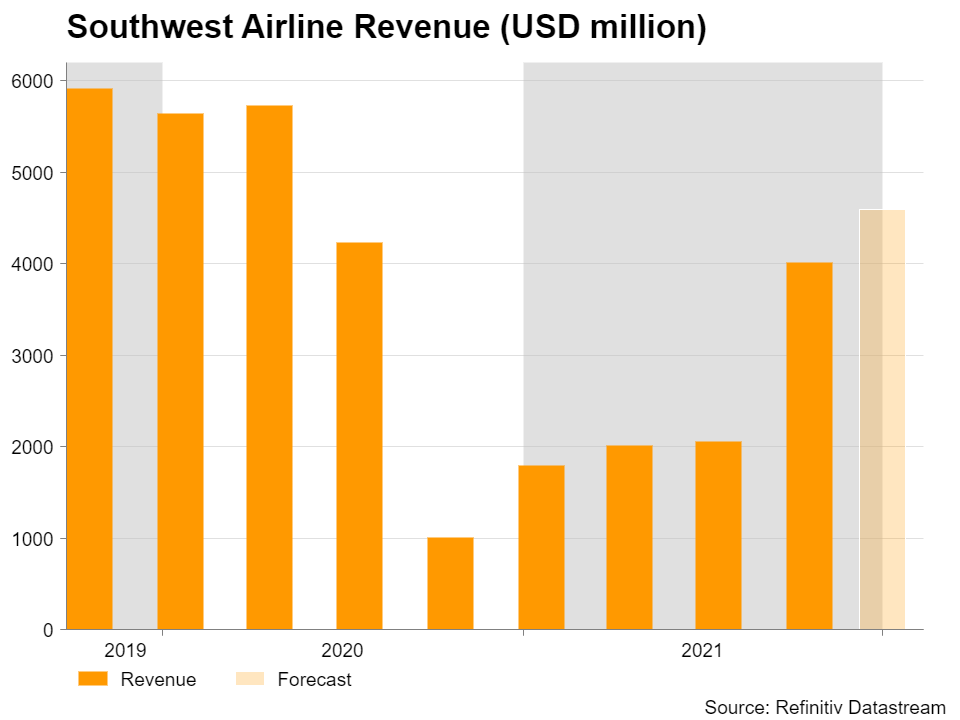 However, with logistic problems and a lack of staff, Southwest is not looking like an appealing candidate for an earnings beat. Flight delays and cancellations witnessed throughout the summer could materialize negatively in the upcoming earnings report.

Will earnings figures put a halt on 2021 gains?

Southwest stock has rallied by over 9% in 2021, underperforming the S&P 500 that is higher by 22.6% over the same period, reflecting the company’s recent struggles. An earnings beat could push the price towards its 50-day simple moving average (SMA), currently at 50.56. Overcoming this level, the price could test the 52.50 resistance level and then move to a congested area that encompasses the 54.40 resistance and the 200-day SMA, currently at 54.47.

To the downside, should the numbers come out worse-than expected, a potential sell-off may push the price towards the 47.30 barrier. Moving below that level, the market might seek immediate support at its nine-month low of 43.70.

The company’s forward price/earnings ratio, which denotes the dollar amount someone would need to invest to receive back one dollar in annual earnings, is currently at 30.3 compared to the industry's median of 14.6. This suggests that Southwest may be relatively overvalued relative to its peers. Moreover, the company has eliminated its dividend at the beginning of 2020, falling behind the 2.8% dividend yield of the passenger transportation services industry.