Wall Street is in the midst of another relief rally as investors pile into stocks again following the latest price indicators out of the United States reaffirming that inflation has peaked. Impressive earnings from retail giant Walmart added to the upbeat mood on Tuesday. But as the rebound begins to lose momentum, the other retailers reporting this week are unlikely to refuel the rally.Premature optimism?

The S&P 500 is flirting with the key 4,000 level again, having bounced back more than 14% from the October trough when it plunged to its lowest in almost two years. Much of the gains are attributed to the euphoria surrounding the softening inflation picture in the US that has spurred another wave of repricing in money markets, this time leading to a lower Fed terminal rate.

This back and forth between hawkish and dovish bets is nothing new, and neither is the Fed’s consistent messaging that rate increases still have some way to go. Hence, as the S&P 500 approaches its 200-day moving average (MA), this could be another sell signal as was the case during the previous rebound in August.

On the lookout for trend reversal signals

The only difference to note here, however, is that the descending trend line lies somewhat above the 200-day MA, so the rally could stretch a bit further. Another potential focal point for the bulls is the 50% Fibonacci retracement of the 2022 downtrend at 4,155, which would lift the index both above the 200-day MA and the downtrend line.

However, a more convincing signal for a trend reversal would be if the S&P 500 climbs above the 4,300 level – the 61.8% Fibonacci as well as the August top. But this looks like quite a tough challenge at the moment given that the Fed has had a tendency lately to nip any talk of a dovish pivot in the bud.

Additionally, whilst it may be true that bad news on the economy is good news, as it would increase the likelihood of the Fed going easy on rate hikes, a recession doesn’t bode well for the earnings outlook, especially if we’re only at the early stages of one.

Department store chain, Target, just announced a 49% drop in year-on-year earnings per share (EPS), and although revenue slightly beat estimates in its third fiscal quarter, the company was downbeat about sales in the holiday quarter.

The other big department store operators, Macy’s and Kohl’s, which are due to report on Thursday, are likely to be in the same boat. But as always, where there are losers, there are winners, and the exception in this case is Walmart. 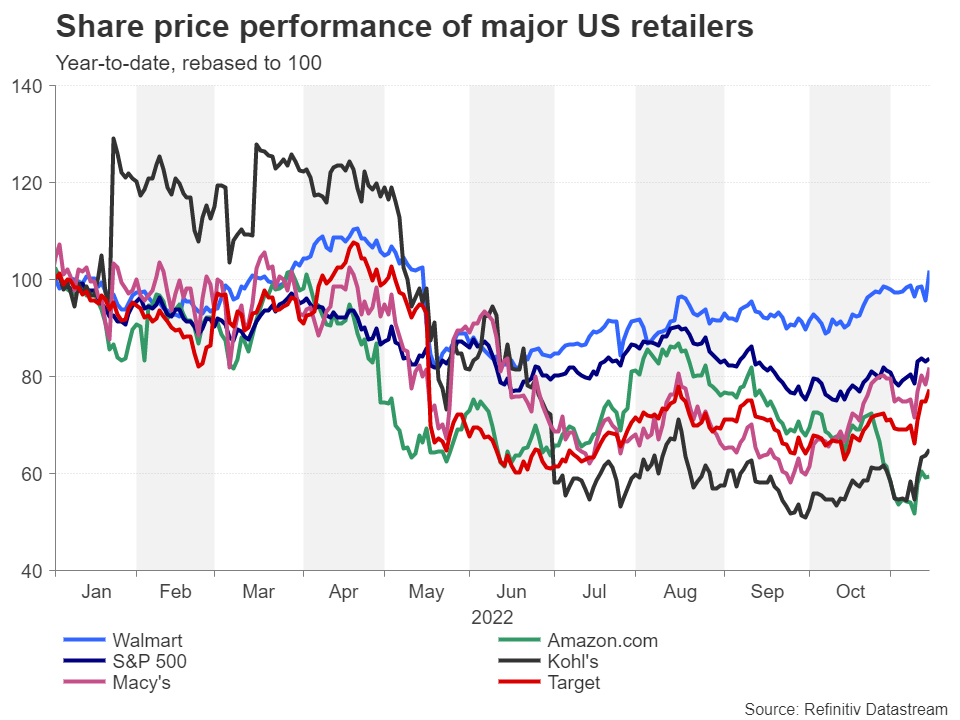 A surprise winner of the Q3 earnings season

As the cost-of-living crisis squeezes households’ incomes, Americans are flooding to discount retailers such as Walmart for their groceries and shunning the more premium brands. Walmart beat both its EPS and revenue estimates for the third quarter by a wide margin. Another unique feature about Walmart is its success in developing an in-house advertising platform for its website, which is generating additional revenue for the company.

With the earnings season now drawing to a close, the main takeaway has been that it’s not all doom and gloom out there. Ultimately, however, whether this is just another bear market rally or an actual trend reversal will be determined by how soon the Fed makes its eagerly awaited dovish pivot.