The Walt Disney Company will report its fiscal third quarter financial results on Thursday after the close of Wall Street trading. The Company is expected to reveal a big jump in year-on-year revenue growth for the June quarter as more Disney parks and movie theatres reopened their doors. But there are worries that new subscription additions at the popular Disney+ streaming service may disappoint again. The share price hasn’t really gone anywhere this year, which perhaps is partly a reflection of the slowdown in the streaming business. Can Disney deliver a surprise earnings beat that is able to re-energise the stock?Disney parks are welcoming customers again

It’s been just over a year since Disney World in Florida reopened its doors to the public as America’s first Covid wave subsided. However, some of Disney’s other parks and resorts around the country were forced to remain shut for much longer. For example, Disneyland in California only reopened on April 30 this year due to the state’s much tougher response to the pandemic. Disney parks around the world have also had to adapt to differing degrees of regulations and guidelines.

But what is significant about the April-June period is that its as close to a full reopening that Disney resorts globally have been to since the onset of the pandemic, not just in terms of venues in operation but also in terms of capacity and visitor numbers. For the American market, in particular, investors will be keeping a close eye on how many customers felt safe enough to go back to Disney parks as virus cases fell and more people were vaccinated.

The return of more visitors to theme parks combined with the low base effect of 2020 is expected to have lifted revenue by 43.0% year-on-year to $16.85 billion in Q3. This would, however, still be more than 15% short of what the Company reported in the same quarter in 2019, indicating the road to recovery is far from over. 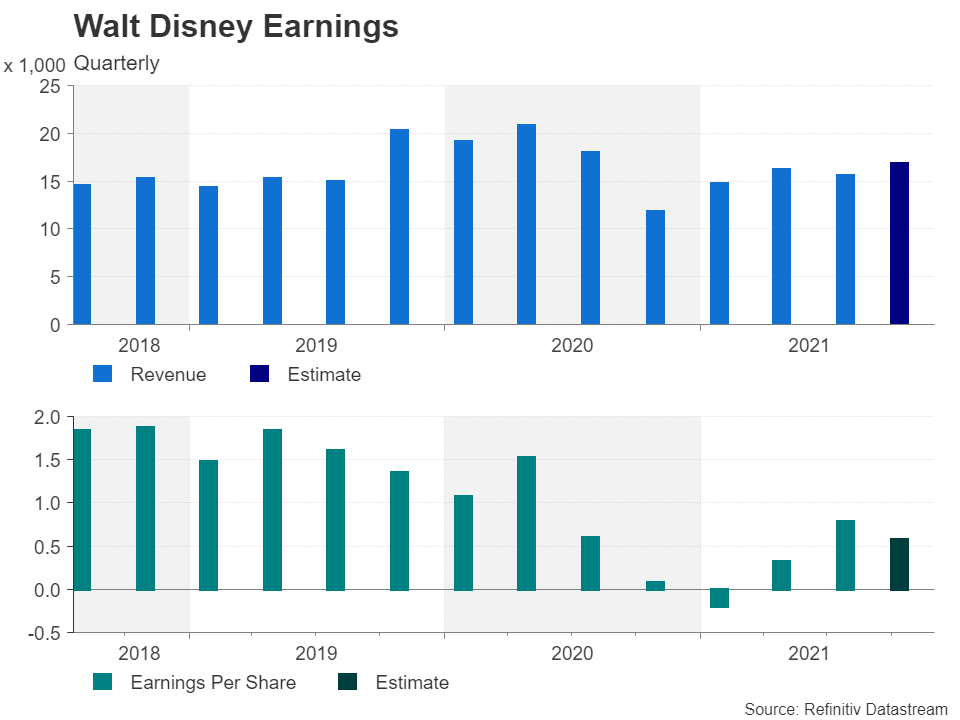 Looking at the earnings per share (EPS) estimates, analysts are expecting a figure of $0.58 according to Refinitiv IBES. This would represent a massive improvement over Q3 2020’s EPS of just $0.08 but down on the $0.79 reported in Q2.

While the performance of the Company’s Parks, Experiences and Consumer Products division is bound to determine whether the actual numbers come in above or below the estimates, the size of any surprises will more likely be determined by how Disney’s other business segments fared.

Are boom times over for Disney+?

The Direct-to-Consumer and International division will specifically be under the spotlight as competition in the streaming arena is not only heating up, but the reopening of the economy in the US and elsewhere means consumers might be spending less time at home and going out more instead. Although following the launch of Disney+, the streaming service has enjoyed spectacular growth in subscribers, investors were alarmed when the Company posted slower-than-expected growth for Q2 back in May.

The current market king, Netflix, further raised concerns about oversaturation in the streaming market when it reported disappointing earnings for the latest quarter. Disney shares plunged together with Netflix’s after the results but have since steadied. They are, however, still down more than 2% in the year-to-date. 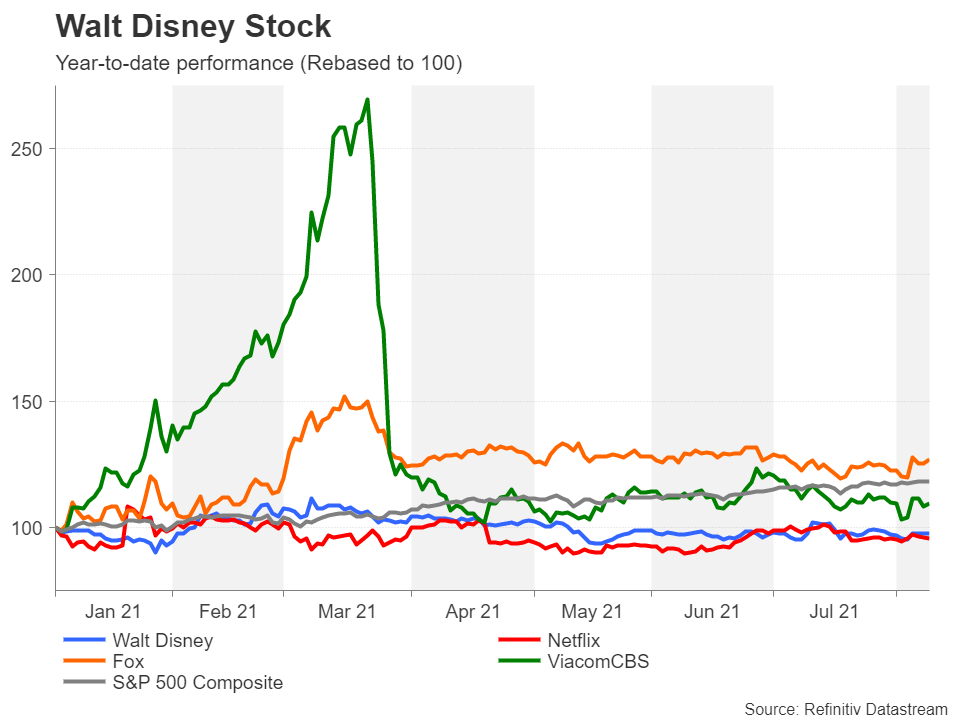 2021 has been sluggish for Disney stock

The stock has been hovering around its 50-day moving average in recent weeks. An upside surprise in the earnings results could boost the stock towards the $190 resistance. Stronger-than-forecast park visitor and Disney+ subscriber numbers could be enough for such a push and beyond, potentially towards the 2021 peak of $203.02.

However, if the growth in both those businesses is on the soft side and additionally, the box office performances of Disney’s latest movies don’t set investors alight either, the stock could crash below its 200-day moving average, currently at $173.90. This level is near the 23.6% Fibonacci retracement of the post-pandemic rebound, which if broken, could pave the way for the 38.2% Fibonacci of $155.67.

New subscribers guidance will be key

Despite some downside risks to Disney’s earnings, analysts on average are holding on to their ‘buy’ recommendation for the stock, setting a median price target of $214.00, which is well above the presently traded levels. From a valuation perspective, Walt Disney remains expensive, even on a forward multiple basis. It’s 12-month price/earnings ratio is second only to Netflix. 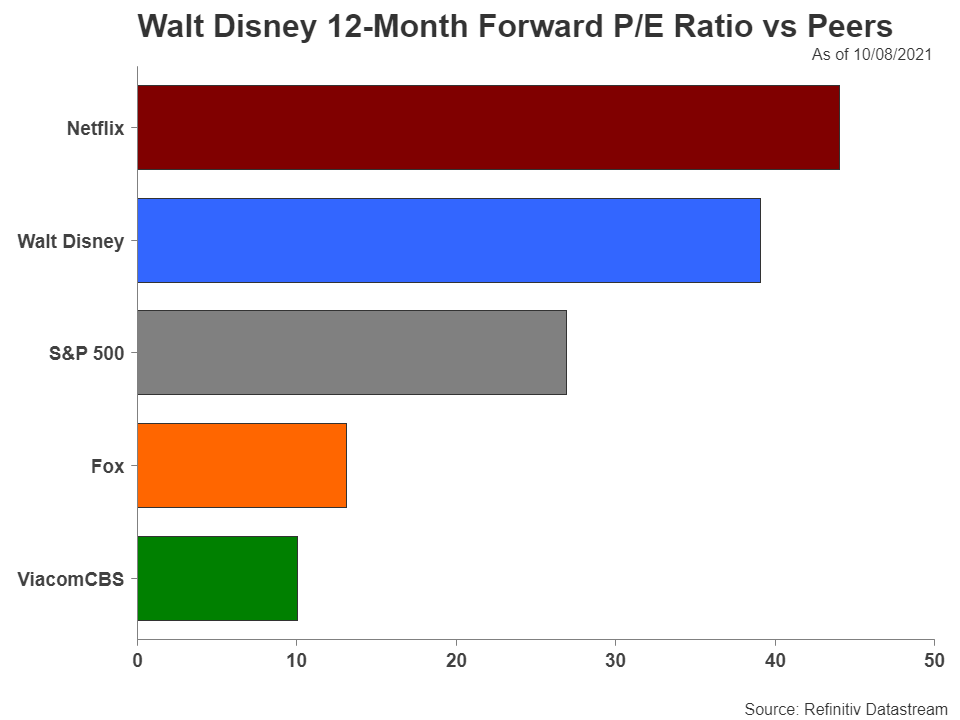 This puts even more focus on what guidance the Company will give regarding new Disney+ subscribers for the upcoming quarters, as most of the bullish bets for the stock are founded on its streaming business’ growth potential.