Last Thursday, Twitter reported its financial performance for the first quarter of 2022, but its earnings announcement was overshadowed by Elon Musk’s $44 billion takeover deal earlier in the week. The latest earnings report could be the last in the history of the social media behemoth as its potential new management is planning to take the firm private to exploit its full potential. Although Elon Musk has already outlined most of his plans about Twitter’s future, until the deal is sealed and the dust settles, investors will be keeping a close eye on the firm’s developments.

Mixed performance and no guidance

Twitter saw its first-quarter revenue climb 16% annually to $1.20 billion but fall short of the $1.23 billion forecast. On the other hand, the firm announced earnings per share (EPS) of $0.04, beating the $0.01 estimates by Refinitiv analysts. More importantly, the social media giant reported a jump in daily active users, who increased 15.1% year-on-year, reaching 229 million.

After the announcement, Twitter’s stock remained stable despite experiencing losses after Musk’s $44 billion purchase was accepted by the firm’s board previously in the same week. Under the terms of the deal, shareholders would receive $54.20 per share, marking a 38% premium over the stock price on the day Musk revealed his stake in Twitter.

Additionally, the company announced that due to the pending acquisition by Elon Musk, it will not provide any future guidance, while all the previously reported targets, forecasts and outlook would be withdrawn. 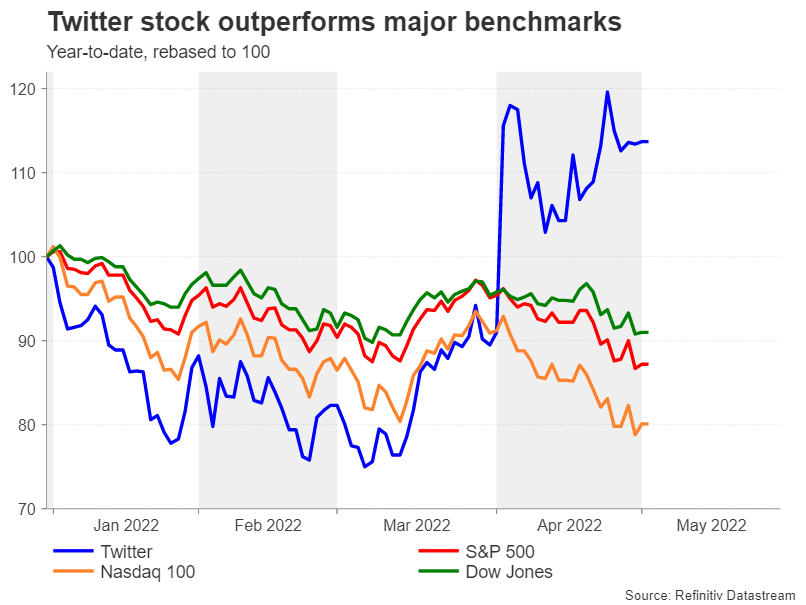 Musk could back off

The fact that Twitter’s stock price is currently trading below the $54.20 mark indicates that investors remain dubious about Musk’s plans. Apart from the required scrutiny from regulators and shareholders’ approval, the billionaire has a history of backing out at the last minute from many important deals. In April, he decided to not take up a seat on Twitter’s board, while in 2018 he did not move ahead with an offer of $72 billion to take Tesla private as he had already announced.

Additionally, he took back his promise that Tesla’s electric vehicles would be purchasable in Bitcoin and Dogecoin, alongside joking about quitting his job and becoming an influencer. Having said that, a regulatory filing by Twitter revealed that Musk would have to pay a $1 billion termination fee to Twitter if he walked away from the deal. Thus, if his plans don’t work out and he eventually changes his mind, he would just need to pay less than 1% to bail himself out.

Musk has repeatedly stated that he intends to take Twitter private for the firm to reach its full potential. The most obvious immediate change would be Twitter's stock being taken off the New York Stock Exchange, but this move could prove both a curse and a blessing.

On the one hand, Twitter will not need to report to US regulators and Wall Street, while its management will also be free to proceed with bold or unpopular changes in its business plan without having to worry about a potential blowback at its share price.

On the flipside, going private would result in Twitter losing its ability to raise cash easily and promptly through the stock market, leading to more expensive sources of funding that could discourage investment spending and deteriorate the firm’s financials. Furthermore, the company would most probably face a decline in its ad revenue as advertisers would scale down their spending in an unexpectedly mutating platform.

To obtain financing for his Twitter deal, Musk has been in extensive talks with private equity firms, hedge funds and other major Twitter investors. However, his first move was to offload a huge chunk of Tesla's shares, which helped him obtain almost $5 billion.

Aside from that, he has also used Tesla’s shares as collateral for his personal loans granted to finance the acquisition, which makes Twitter’s value directly connected with Tesla’s. Specifically, if Twitter experiences financial difficulties, he will need to sell more of his electric carmaker’s stocks to compensate for the losses. Inversely, a sell-off in Tesla’s stock would force him to add more cash into his loan margins, curtailing his investment spending on Twitter.

Musk has clearly stated that his desire is to promote free speech on Twitter and reduce censorship to a great extent.  Moreover, he pledged to ban bots and fake accounts from Twitter so there would be no artificial intervention in conversations and exchanges of thoughts that could adversely influence public opinions. Nevertheless, initiatives like that could potentially open the door to hate speech and misinformation.