The four biggest US banks will kick the earnings season this week, with JPMorgan Chase and Wells Fargo reporting their financial results for the first quarter of 2021 today followed by Bank of America and Citigroup on Thursday. The banking sector has drastically changed course from one of the worst-performing industries during the devastating 2020 year to a well-growing sector in early 2021. However, with the banks consolidating gains around record highs on Wall Street for several weeks now, investors would look for answers about whether the recovery optimism is overdone and if the bullish cycle is over. The consensus recommendation from Refinitiv is "buy" for all banking stocks.Yield rally not bad for banks after all

The price of bank shares more than doubled from the 2020 troughs, with JPMorgan and Bank of America growing slightly faster than the S&P 500 to hit new all-time highs comfortably above the 2019 peaks. The impressive rally was mainly underpinned by the massive stimulus released by the Federal Reserve and the Federal government, and by rising hopes that the vaccine rollouts could soon allow for fewer lockdown restrictions, with Refinitiv analysts pricing a 24% expansion in the S&P 500 earnings for the first quarter.

Undoubtedly the Fed’s decision to hold its benchmark interest rate unchanged near zero is not splendid news for banks since this translates to squeezed margins and weaker balance sheets. On the other hand, this is not an unwelcome development either, especially if someone links that with the steepening yield curve. Bond yields determine the level of interest rates charged in financial markets; therefore, a steep curve means Banks can borrow short at the start of the curve and lend long at the end of the curve, making additional money. The bigger the spread, the wider are the profits from lending, and the bigger the reward for their risk. At this point, it is also worthy to note that the largest the exposure to commercial loans, which are more dependent on short-term rates, like in the case of Wells Fargo, the narrower the benefit from higher long-term yields.

Growth prospects for the US are brighter than any other economy at the moment given the super-accommodative fiscal and monetary policies and the fast inoculation program which continues without interruptions. The earnings results in Q1, however, may not give full shape to this growth optimism yet as lockdown restrictions were mostly in place during that period.

Particularly, Citigroup is expected to report the fastest quarterly increase in revenues of 14%, while year-on-year all banks are forecast to reveal a negative growth besides JPMorgan, which is projected to have expanded by 4.9% from Q1 2020 and by 2.2% from Q1 2019.

According to net income estimates, the first quarter of the year was profitable in quarterly terms for all banks besides JPMorgan, with Wells Fargo likely posting an extraordinary expansion of 6,492% y/y and experiencing a similar yearly boost in earnings per share (EPS). Other banks are also projected to print a significant but weaker positive yearly growth in EPS and state a mixed quarterly change.

Last year the banks raised the level of capital reserves to balance the defaults in loans. Several companies went bankrupt in the US since then, but a bulk of capital reserves is said to be still in the storage, increasing speculation that more cash could be released into the markets this year. That said, with non-performing loans forecast to rise in double digits in Bank of America, Citigroup, and Wells Fargo, and total deposits barely climbing, loan loss provisions data may not pull back yet. Income from fees and commission may keep trending up as well. 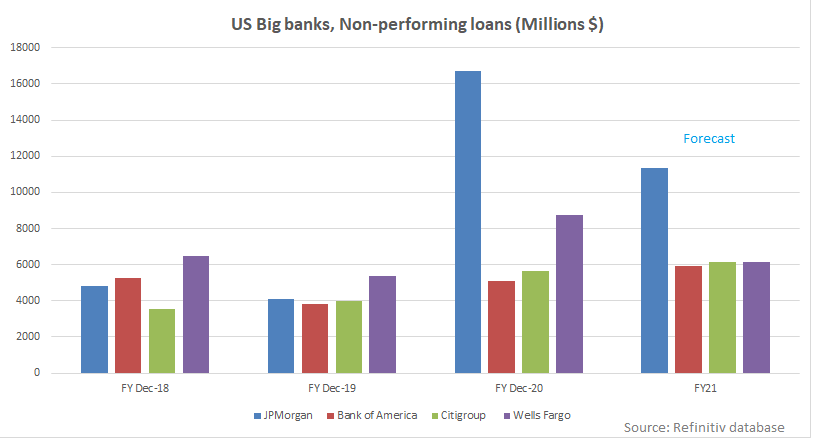 In the previous earnings release, the results were weighted by the pandemic but encouragingly came in stronger than analysts expected. The economic outlook continues to look muddy this year though the dark days of 2020 seem to be behind us, and the trend in earnings could see further improvement, especially on the investment banking side, where equity underwriting and mergers and acquisitions activities soared lately, with the frenzy of SPACS raising many billions of funds in the financial sector.

Looking at JPMorgan’s stock, the rally from the 3 ½ -year lows topped at a record high of 161.69 in mid-March, but the price could not sustain its bullish momentum above the long-term resistance line, slipping below it instead to start a consolidation phase. For rapid recovery, an upbeat earnings report should be coupled with bright expectations about the rest of the year to lift the price to uncharted territory. Beyond the March peak, the spotlight will turn to the 165.00 and 170.00 psychological levels.

Should the results disappoint, with the bank maintaining some caution about the coming quarters, the stock may slip towards the 150.00 support area, where the 50-day simple moving average is converging. A sharper decline may stabilize near the crucial 141.50 mark, a break of which would downgrade the bullish outlook in the bigger picture to neutral.